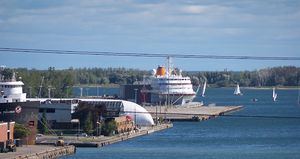 Toronto’s International Marine Passenger Terminal is located on the east side of the Eastern gap, five kilometers from the city center.

The Port of Toronto’s International Marine Passenger Terminal was built in 2005 to accommodate The Spirit of Ontario I a water-jet powered big catamaran fast ferry that was to make several round trips per day between Toronto, Ontario, Canada and Rochester, New York, USA. The terminal is at 8 Unwin Avenue, in the old Portlands, near Cherry Beach.[1] The terminal cost $8 million to construct.[2]

The Rochester firm that initially owned the ferry had a 14 year lease on the use of the terminal that would have paid the City of Toronto $250,000 per year.[3][4] The lease was terminated in December 2009 after payment of a $90,000 settlement.

For the three years it was in production the CBC drama The Border used the customs facilities of the terminal as the headquarters of an elite customs and border squad.[4]

The fast ferry service was only in service for a total six months.[4] Cruise ships that serve European tourists, cruising the Great Lakes, make limited use of the terminal.