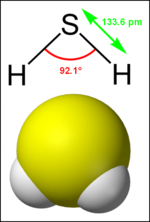 Hydrogen sulfide (or hydrogen sulphide) is a chemical compound with the formula H2S. It is a colorless, highly toxic, flammable gas with a characteristic foul odor.

Hydrogen sulfide is present in very large amounts in raw natural gas and also occurs in large amounts during the refining of petroleum crude oil. In fact, the vast majority of the 66,000,000 metric tons of elemental sulfur produced worldwide in 2006 was by-product sulfur from petroleum refining and natural gas processing plants.[1] It is also present in volcanic gases and some water well sources

It also occurs in swamps and sewers as a result of the bacterial breakdown of organic matter in the absence of oxygen, which is known as anaerobic digestion.

Hydrogen sulfide is a highly toxic and flammable gas (flammability range: 4.0 to 46 volume % in air).[4] It is heavier than air and tends to accumulate at the bottom of poorly ventilated, confined spaces.

Hydrogen sulfide is readily soluble in water, amounting to 4.1 grams per litre of water at 20 °C which is equivalent to 0.41 weight %.[5] When it is in solution in water, the H2S forms a weak acid (sometimes referred to as hydrosulfuric acid) containing hydrosulfide and sulfide ions (HS− and S2−). The solubility is further enhanced in alkaline solutions due to increased ionization.

Hydrogen sulfide reacts with metal ions to form metal sulfides, which may be considered the salts of hydrogen sulfide. Some minerals are sulfides.

Hydrogen sulfide is considered a broad-spectrum poison, meaning that it can poison several different systems in the body, although the nervous system is most affected:[4][6][7]