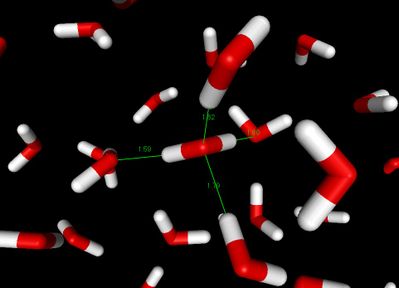 In chemistry, a hydrogen bond is a type of attractive intermolecular force that exists between two partial electric charges of opposite polarity. Although stronger than most other intermolecular forces, the typical hydrogen bond is much weaker than both the ionic bond and the covalent bond. Within macromolecules such as proteins and nucleic acids, it can exist between two parts of the same molecule, and figures as an important constraint on such molecules' overall shape.

In proteins, hydrogen bonds form between the backbone oxygens and amide hydrogens. When the spacing of the amino acid residues participating in a hydrogen bond occurs regularly between positions i and i + 4, an alpha helix is formed. When the spacing is less, between positions i and i + 3, then a 310 helix is formed. When two strands are joined by hydrogen bonds involving alternating residues on each participating strand, a beta sheet is formed. Hydrogen bonds also play a part in forming the tertiary structure of protein through interaction of R-groups.(See also protein structure).

Theory of the hydrogen bond

The mechanism of hydrogen bonding was long not well understood. However with the advent of computers and reliable computational methods, it became clear that the same contributions played a role as in other kinds of intermolecular forces. In the early 1980s it was shown that electrostatic forces are dominant in the attraction, i.e., the attractive part of the hydrogen bond is mainly due to the interaction of permanent dipoles and higher permanent multipoles of the molecules participating in the bond. In 1983, Buckingham and Fowler[1] modelled the interaction of a large number of hydrogen bonded van der Waals molecules by atomic hard sphere repulsions and distributed multipole interactions. They found a qualitative agreement between predicted and measured structures, which showed that their model accounted for the major effects of the hydrogen bonding. These results have been borne out by many quantum chemical calculations since then, of the perturbative as well as of the supermolecule type.

However, until recently some controversy persisted about the nature of the bond. A widely publicized article[2] claimed from interpretations of the anisotropies in the Compton profile of ordinary ice that the hydrogen bond is partly covalent. Some NMR data on hydrogen bonds in proteins also seemed to indicate covalent bonding. These interpretations were refuted by Ernest R. Davidson and coworkers.[3] It is now commonly assumed that for hydrogen bonding the same effects (exchange, electrostatic, polarization, and dispersion) play a role as for "ordinary" intermolecular forces, with electrostatics plus Pauli (hard sphere) repulsion being the most important for hydrogen bonds.