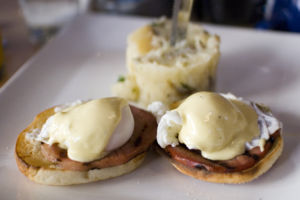 Hollandaise sauce is a well-known French sauce made from egg yolks and melted butter that is frequently eaten with vegetables, fish, and eggs benedict. Its basic flavoring is very simple: lemon juice, salt, and white pepper; adventuresome chefs may add a few drops of Worcestershire sauce or Tabasco. Hollandaise is similar to mayonnaise in that both of them are made by whisking warm liquids into beaten egg yolks in order to create a thick emulsion. Their primary differences are that hollandaise uses butter instead of oil and that hollandaise is served warm. First created in France, it is one of the basic mother sauces (sauces mère) of classic French cuisine, and is called "hollandaise" because of its copious use of butter, Holland at one time being considered the land of butter. Hollandaise is thinner than mayonnaise, more akin to its sister sauce, béarnaise, and traditionally was served with vegetables, primarily asparagus, and fish, often salmon. Sometime around the turn of the 20th century the dish called eggs benedict was created and hollandaise, at least in the United States, is now, perhaps, more associated with this popular brunch entrée than anything else.

Like mayonnaise and béarnaise, hollandaise has a reputation among home cooks as being difficult to prepare without "curdling" or "breaking", which occurs when the emulsion suddenly dissolves and the sauce becomes an unpalatable mess of eggs yolks and oil. For this reason, many commercially prepared hollandaise sauces are sold in bottles and as mixes. Experienced cooks, however, know that it is easy to avoid hollandaise disasters by adding the melted butter slowly and by not trying to incorporate more butter than the yolks can absorb. There are also various techniques to restore a sauce that has broken.