See the tab above for Recipes of Bearnaise sauce. 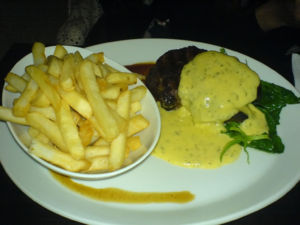 Bearnaise sauce is a classic French sauce made with egg yolks and clarified butter and seasoned with tarragon, shallots, and chervil. Although it is part of the traditional "haute cuisine", it is also akin to mayonnaise in its comparative simplicity and can be found in many relatively unpretentious restaurants, both in Europe and North America. It is "now a universal favorite, almost everyone's choice for the greatest of all sauces." [1] It is generally served with grilled meats, particularly beef, but can also accompany grilled fish such as salmon.

Although there are innumerable ways of making a successful bearnaise, the basic method is similar to that used for mayonnaise; beaten egg yolks are seasoned, then thickened by the slow addition of liquid while being vigorously whisked. Bearnaise, however, is more highly seasoned than mayonnaise, and is thickened with butter, almost always melted and clarified, instead of with oil. Seasonings vary from recipe to recipe, including vinegar or white wine, tarragon, salt, black pepper, bay leaf, thyme, and parsley, all cooked together until the liquid is greatly reduced, then strained into the egg yolks before thickening. Additional chopped tarragon and parsley are generally added to the thickened sauce, along with chervil and a few drops of lemon juice. Traditionally, bearnaise is served slightly warm and freshly made; because of its butter content, if it is refrigerated it reverts to a hardened state. It cannot then be reheated without its emulsion breaking apart and making it inedible; refrigerated bearnaise can, however, be slowly softened by resting at room temperature for several hours and then being delicately whisked. In spite of the many variations in making bearnaise, nearly all of them make a tasty sauce that is far superior to the many bottled or semi-prepared bearnaise sauces that are now sold in grocery stores.

Fernand Point, for many years the owner of what was generally considered to be the greatest restaurant in the world, La Pyramide, in Vienne just outside of Lyons, once quipped that, "Une béarnaise c'est simplement un jaune d'œuf, une échalote, un peu d'estragon. Mais il faut des années de pratique avant que le résultat ne soit parfait." — "A bearnaise is only an egg yolk, an shallot, a little bit of tarragon. But it takes years of practice before the result is perfect."

Tradition has it that sauce béarnaise was invented and first served at a restaurant called "Le Pavillon Henri IV" in Saint-Germain-en-Laye, not far from Paris. The exact year is uncertain but was most likely in the 1830s or 1840s. Henri IV, a French king who was born in the old French province of Béarn, was a noted gourmet, and the restaurant's chef created a dish that is still served throughout France today under the original name: tournedos Henri IV — a grilled filet steak served on a fried crouton and accompanied by bearnaise sauce.

The Saucier's Apprentice, A Modern Guide to Classic French Sauces for the Home, by Raymond Sokolov, Alfred A. Knopf, New York, 1987