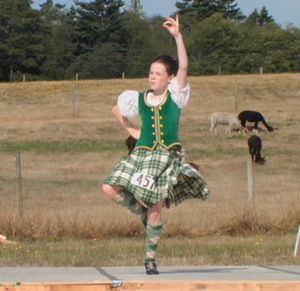 While alpacas graze in the background, one of the Highland dance competitors performs at the 2004 Whidbey Island (Washington) Highland Games

Highland dancing is the national dance of Scotland. It is an integral part of nearly every Highland games event where, in its most common public face, the dancers can be seen competing in traditional dances wearing colorful Highland attire and accompanied by bagpipe music. It is in the context of these competitions that Highland dancing evolved over the years into its present form.

However, neither competition, nor Highland attire, nor bagpipe music is a necessary part of Highland dancing. Sometimes the dance form can be seen in exhibitions (or danced for pleasure) with the dancers wearing uniquely designed costumes and dancing a choreographed routine to theme music of their choosing.

Highland dancing is one of two basic types of Scottish dancing which can be seen at nearly every modern day Highland games event. As the term is used today, Highland dancing is a highly competitive and technical dance form which requires many hours of practice and training over a period of several years to perfect. In terms of its technical requirements and the training required for its performance, Highland dancing has much in common with ballet with which it shares common roots in the classical dances of earlier times.

Following the battle of Culloden in 1746, the British embarked on a policy of cultural suppression against the Highland clans, culminating the following year when the Act of Proscription, which forbade the wearing of kilts or the playing of bagpipes, went into effect. The Act was repealed in 1782 and in the early 19th Century, there was something of a revival of Highland culture, or such as it was imagined to be. This revival, later boosted greatly by Queen Victoria's enthusiam for it, included the beginnings of the Highland games as we now know them. Highland dancing was an integral part of the Games from the very start of their modern revival.

But historically, the Highland dances were danced only by men. This was the result of the nature and origin of the dances themselves as well as the fact that during the years of Proscription, only military regiments were permitted to adopt Highland attire and practice the Highland traditions such as dancing.

But late in the 19th Century, a young woman named Jenny Douglas decided to enter a Highland dance competition. As this was not expressely forbidden, she was allowed to enter and since then, the number of females participating in the sport has increased until today in excess of 95% of all dancers are female. There have been several female World Highland Dance Champions crowned at the Cowal Gathering since they began organizing the competition in 1948.

Timing concerns the ability of the dancer to follow the rhythm of the music.

Technique has to do with the correct execution of the steps in coordination with the movements of the rest of the body, including head, arm and hand movements.

Artistic interpretation covers that essential element of all dance and artistry in general which cannot be quantified or reduced to any set of rules or specific points, but which does concern the ability of the dancer or performer to convey a sense of feeling, understanding, and appreciation of the art form.

The various governing bodies of highland dancing establish parameters for the dances themselves and scoring systems to grade the dancers and determine their class and progress from one class to another.

However, the SOBHD is not the only governing organization which has garnered a significant degree of adherence. In New Zealand, Highland dancing is regulated by the New Zealand Academy of Highland and National Dancing, while in Australia and much of England, the Scottish Official Highland Dance Association has many adherents.