From Citizendium
(Redirected from Highland games)
Jump to: navigation, search

Highland Games are festivals held throughout the year in Scotland and many other countries of the world as a way of celebrating Scottish and Celtic culture and heritage, especially that of the Scottish Highlands. Almost all of the Games feature certain elements, such as the bagpipes, the kilt, and the heavy events, especially the caber toss, which are virtually emblematic of Scotland. While centred around competitions in piping and drumming, dancing, and Scottish heavy athletics, the games also include entertainment and exhibits related to other aspects of Scottish and Gaelic culture.

Games in the Highlands of Scotland

It is reported in numerous books and Highland Games programs, that King Malcolm Canmore, in the 11th century, summoned contestants to a foot race to the summit of Craig Choinnich (overlooking Braemar)[1]. Some have seen in this alleged event the origin of today's modern Highland Games[2].

Following the repeal of the Act of Proscription, various Highland Societies, beginning in the 1780s, began to organize around attempts to retain or revive Highland traditions. It was these early efforts that eventually led to the Highland Games as we know them today.

This modern revival of the Highland Games received an enormous boost with the visit of King George IV to Scotland in 1822, although events were held in the years just prior to that. In 1819, for example, the St. Fillans Society organized a full scale Highland Games with piping, dancing, and athletics and the Northern Meeting Society's Highland Games - the forerunner of The City of Inverness Highland Games - was first held in 1822.

In the 1840s, in Braemar, Games began as a fund raising effort by local artisans to support a "Friendly Society" and their charitable activities. Soon thereafter, Queen Victoria who, together with her consort Prince Albert, had made Balmoral Castle their special retreat, began to patronize the Games. The Queen first attended the Braemar Games in 1848 and the following year, they were moved to the grounds of the Castle itself. Later, in 1868, the first in a series of "Highland Memoirs" excerpted from Victoria's Journals, would be published.

Together with the earlier 1822 event, Queen Victoria's patronage of the Games constituted one of the most significant factors in the popularization of the Games and what some have called the Highlandification of Scotland.

Among better-known games in Scotland are the ones held at Braemar, Inverness, Cowal, Lonach, Ballater and Aboyne. The Aboyne games have been running since 1867 without a break apart from the two world wars.

In the latter part of the 19th century, the Highland Games played a role in the development of the Olympic movement. As part of his efforts to organize the first games, Baron Pierre de Coubertin visited a number of athletic competitions in order to determine which sports should be included in the forthcoming Olympic Games, to standardize rules, and to examine the technical aspects of running such a competition. Among the events he visited for this purpose were a Highland Games event organized in conjunction with the Paris Exhibition of 1889. That event, in addition to what we today would call track and field events, also contained wrestling, tug-of-war, cycling, as well as competition in piping and dancing.[3]

In their original form many centuries ago, Highland Games gatherings centered around athletic and sports competitions. Though other activities were always a part of the festivities, many today still consider that Highand athletics are what the games are all about - in short, that the athletics are the Games, and all the other activities are just entertainment. Regardless, it remains true today that the athletic competitions are at least an integral part of the events and one - the caber toss - has come to almost symbolize the Highland Games.

Although quite a range of events can be a part of the Highland athletics competition, a few have become standard.

In the 19th century, the athletic competitions at Highland Games events resembled more closely a track and field meet of modern times. Some of the games preserve this tradition by holding competitions is these events. This could include, in addition to standard track and field events, a tug-of-war, kilted mile run and other foot races, shinty (a game somewhat like field hockey and dating back to the 18th century or earlier), and the stone carry.

Many of the Heavy Events competitors in Scottish highland athletics are former high school and college track and field athletes who find the Scottish games are a good way to continue their competitive careers.

For many Highland Games festival attendees, the most memorable of all the events at the games is the massing of the pipe bands. Normally held in conjunction with the opening and closing ceremonies of the games, as many as 20 or more pipe bands will march and play together. The result is a thunderous rendition of traditional favorites Scotland the Brave or Amazing Graze, and other crowd-pleasing favorites.

It is, in fact, the music of the bagpipe which has come to symbolize music at the Games and, indeed, in Scotland itself. In addition to the massed bands, nearly all Highland Games gatherings feature a wide range of piping and drumming competition, including solo piping and drumming, small group ensembles and, of course, the pipe bands themselves.

But the pipes and drums are not the only music which can be heard at Highland Games. Music at Highland Games gatherings takes on a variety of forms. Many such events offer fiddling, harp circles, Celtic bands and other forms of musical entertainment, the latter usually spiced with a healthy amount of bagpipe music. 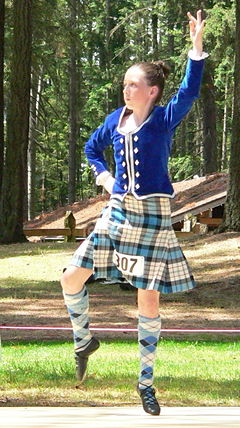 The other type of dancing which one can see at Highland Games events is the highly competitive and technical form known as Highland dancing. This again takes two forms. First there are the traditional Highland dances - the Sword Dance (or Gillie Calum), the Highland Fling, the Highland Reel, and the Seann Triubhas (pronounced shawn trews). The other class of competition dances are known as character and national dances, the most well known of which are the Scottish Lilt, the Flora MacDonald, the Earl of Errol, Highland Laddie, Blue Bonnets and Village Maid. Also common at the games are the Irish Jig, Irish step dancing, and the Sailor's Hornpipe dances.

Highland dancing, in all its competitive forms, is a very technical dance form, requiring many hours of practice and training over a period of several years in order to perfect. In this respect, it has more in common with ballet than with the social dancing of the Scottish Country Dance. In addition, the Highland dances are typically performed solo, unlike country dancing. Even the Reel, which is performed with other dancers, is judged on an individual basis.

Historically, the Highland dances were danced only by men. This came about as the result of the nature and origin of the dances themselves as well as the fact that during the years of Proscription, only military regiments were permitted to adopt Highland attire and practice the traditions such as dancing.

But late in the 19th Century, a young woman named Jenny Douglas decided to enter a Highland dance competition. As this was not expressly forbidden, she was allowed to enter and since then, the number of females participating in the sport has increased until today in excess of 95% of all dancers are female. There have been several female World Highland Dance Champions crowned at the Cowal Gathering since they began organizing the competition in 1948. 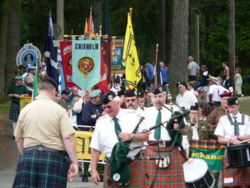 At modern-day Highland Games events, a wide variety of other activities and events are generally available. Foremost among these are the clan tents and vendors of Scottish related goods. The various clan societies make the Highland Games one of the main foci of their seasonal activities, usually making an appearance at as many such events as possible. Visitors can find out information about their Scottish roots and can become active in their own clan society if they wish.

In addition to the clan societies, Games visitors can usually find a number of other Scottish groups represented, such as the Scottish-American Military Society, which often serves as color guard during the opening and closing ceremonies, and the Caledonian Society. A variety of informational booths, exhibits, and demonstrations can also be seen, especially at the larger games. This might include information on genealogy, the Gaelic language, exhibits on sheep shearing and weaving, and a variety of lectures on topics related to Scottish traditions.

Reconstructionist groups such as the Historic Highlanders and the SCA (Society for Creative Anachronism) can be found at some of the Games. These groups research Scottish history and attempt to recreate a picture of the life and habits, including garb, skills, culture and various items of times past, in the Scottish Highlands.

Merchant vendors are almost always a part of the games as well. The larger games will feature a wide assortment of such vendors offering such things as music recordings (bagpipe bands and groups, Scottish and Celtic entertainment groups), music equipment and supplies (bagpipes, drums, music scores, band equipment), books on a wide assortment of things Scottish, Celtic and Irish arts and crafts, and imports from Scotland and the United Kingdom, including an assortment of gift and souvenir items. And of course, there will be kiltmakers and vendors of tartan goods (kilts, blankets, ties, scarves) and kilt accessories.

Animals are also a part of many Highland Games events, with Scottish terriers being perhaps the most familiar. Shelties and border collies can also be seen where many of the Games feature herding competitions involving sheep or geese. Highland cattle are also fairly common at the Games. This is a long haired, shaggy breed with sweeping horns especially adapted to harsh climates and sparse grazing conditions.

Various traditional and modern Celtic arts are often showcased. This could include Harpist's circles, Scottish country dancing, and one or more entertainment stages. In addition, most events usually feature a pre-event ceilidh (a type of social event with traditional music, song, and other forms of entertainment).