As an oral tradition, handed down generation after generation, the true origins of the Hawaiian language are relatively unknown. The Hawaiian alphabet, ka pī‘āpā Hawai‘ i, however, does not have such an obscure past. It was originally designed in the early 1800s by American missionaries who wanted to print a Hawaiian bible. Due to the language being passed down as an oral tradition, the missionaries had to adapt the Roman alphabet to fit their needs.

In 1778, British explorer James Cook made the first reported European discovery of Hawaiʻi. In his report, he wrote the name of the islands as "Owhyhee" or "Owhyee". By July 1823, they had begun using the phrase "Hawaiian Language." The actual writing system was developed by American Protestant missionaries on January 7, 1822. The original alphabet included
A, B, D, E, F, G, H, I, K, L, M, N, O, P, R, S, T, U, V, W, Y, Z
and seven diphthongs
AE, AI, AO, AU, EI, EU, OU.
In 1826, the developers voted to eliminate some of the letters which represented functionally redundant interchangeable letters, enabling the Hawaiian alphabet to approach the ideal state of one-symbol-one-sound, and thereby optimizing the ease with which people could teach and learn the reading and writing of Hawaiian.

Due to words with different meanings being spelled alike, use of the glottal stop became necessary. As early as 1823, the missionaries made limited use of the apostrophe to represent the glottal stop, but they did not make it a letter of the alphabet. In publishing the Hawaiian bible, they used the ʻokina to distinguish koʻu ('my') from kou ('your'). It wasn’t until 1864 that the ʻokina became a recognized letter of the Hawaiian alphabet.

As early as 1821, one of the missionaries, Hiram Bingham, was using macrons in making handwritten transcriptions of Hawaiian vowels. The macron, or kahakō, was used to differentiate between short and long vowels. The macron itself never became an official letter. Instead, a second set of vowels with macrons were added to the language as separate letters. 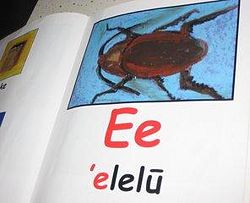