Gut-brain signalling describes the interaction between the gastrointestinal tract and the brain, and how secretion of varying hormones from different areas of the body causes appetite-enhancing and satiety signals to be sent to the brain. The hormones that have been most intensely studied are: ghrelin, obestatin, cholecystokinin (CCK), glucagon-like peptide-1 (GLP-1), peptide YY (PYY) and insulin which all have roles in appetite regulation. The vagus nerve is also a key mediator of regulation, and all of these inputs are processed by areas in the brain such as the hypothalamus and the nucleus tractus solitarii (NTS). 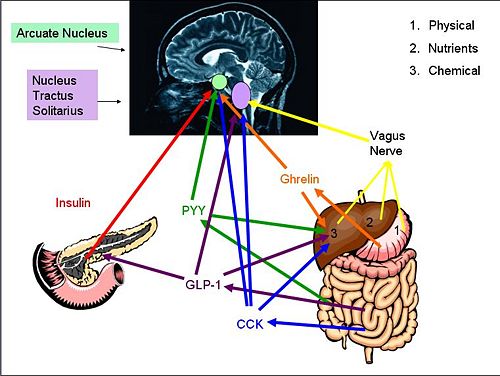 Gut-Brain signaling Pathways Proteins and hormones activate brain pathways in different ways, either by eventual vagal activation or through peripheral circulation. The nucleus tractus solitarii and the arcuate nucleus are then activated.

Cholecystokinin (CCK) is a hormone synthesised by L-cells in the mucosal epithelium of the duodenum, and secreted in response to the presence of partly digested lipids and proteins. CCK inhibits gastric emptying and stimulates the release of digestive enzymes from the pancreas and bile from the gall bladder by acting at CCK-A receptors on afferent vagal nerve endings in the gastrointestinal tract. Because gastric emptying is inhibited, the partly digested lipids and proteins are exposed to the digestive enzymes and bile so are further broken down. As the lipids and proteins are broken down, CCK secretion declines.

CCK is a ‘gatekeeper’ for the response of other gut-brain signalling hormones on the afferent vagal neurons. At low levels (after fasting), CCK stimulates the expression of receptors associated with the stimulation of food intake, including receptors for melanin concentrating hormone (MCH)-1 and cannabinoid CB1 receptors. At high levels (after food consumption), MCH-1 and CB1 receptors are down-regulated. Therefore CCK, at a high or low concentration, can affect how afferent vagal neurons respond to other neurohormones.

Glucagon-like peptide-1 (GLP-1) is a hormone secreted from L-cells in the mucosal epithelium of the duodenum and small intestine. It is derived from the pro-glucagon gene, and is secreted into the circulation in response to the presence of nutrients. It acts at the pancreas, where it stimulates insulin secretion and suppresses glucagon secretion; it also increases insulin sensitivity. GLP-1 also activates anorexigenic neurons in the arcuate nucleus via the caudal brainstem, thereby suppressing appetite. It also decreases gastric emptying, so adds to the feeling of being ‘full’. At higher concentrations, GLP-1 causes nausea, and can induce conditioned taste aversion, where the brain associates the taste of a certain food with being toxic (usually after an individual consumes a food that had made them sick).

In obese individuals, GLP-1 secretion is decreased. When they lose weight, GLP-1 secretion returns to normal so GLP-1 might contribute to the pathogenesis of obesity. Accordingly, GLP-1 agonists have been targeted as a potential therapy for obesity; GLP-1 itself is not suitable as a clinical treatment for obesity as it has a very short half-life (about two minutes).

Peptide YY (PYY) is a 36-amino acid peptide secreted from endocrine cells (L-cells) in the ileum and colon [1]. PYY3-36 is dominant in the two endogenous forms in circulation with both affecting different Y-receptors found throughout the central nervous system, including the vagal nerve and within different brain regions. [2] During fasting, plasma concentrations of PYY are low, but they increase after food intake, particularly high protein meals [3][4],(within 15 min) until a peak at 1-2 hours after the meal. [1] PYY acts as an "ileal brake" to delay gastric emptying. PYY is mostly associated with satiety regulation, where high levels correlate with high satiety; [2] it suppresses appetite in both rodents and humans [1]. A correlation has been shown between high levels of PYY and low markers of adiposity and obese mice have low PYY levels in the circulation. [3], and it is thought to be involved in food intake reduction after bariatric surgery. [5] Gio et al. (2006) also found a negative correlation between PYY circulation levels and waist circumference, suggesting it as a contributing factor to energy expenditure and lipid metabolism. [6] PYY3-36 expression is affected by other areas of the brain, including those connected with reward and pleasure - so PYY might be the ‘switch’ between homeostatic and pleasure controlled ('hedonic') eating. [7]

Insulin is a hormone secreted into the blood by pancreatic β-cells in response to glucose intake. [8] Increased glucose causes secretion of other gut hormones, glucose-dependent insulinotrophic peptide (GIP) and GLP-1, which directly cause the secretion of insulin from the pancreas. [9] With receptors in the hypothalamus (including the arcuate nucleus), cerebellum, cortex and hippocampus, insulin signalling in the brain causes a reduction in food intake and body weight [10] in the arcuate nucleus, it causes increased synthesis of POMC and inhibits production of the orexigenic neuropeptides neuropeptide Y (NPY) and agouti related peptide (AgRP), therefore suppressing appetite. [11] Insulin also enhances the efficacy of systemic CCK in the brain to reduce overall food intake. [12] Reduced levels in insulin results in increased eating and weight gain.[13]

Insulin has a long-term role in the control of energy homeostasis [12] and metabolism. Over 24 hours, it is secreted at a mean level that is proportional to the size of fat stores in the body (adiposity). Insulin signalling in the arcuate nucleus and ventromedial nucleus directly affects the liver via the vagus nerve, inhibiting glucose production [11] and facilitating glucose uptake by the muscles, liver and other tissues. It also promotes fat storage as triglycerides and prevents fat breakdown thus inhibiting fat oxidation and further promoting glucose uptake in cells. 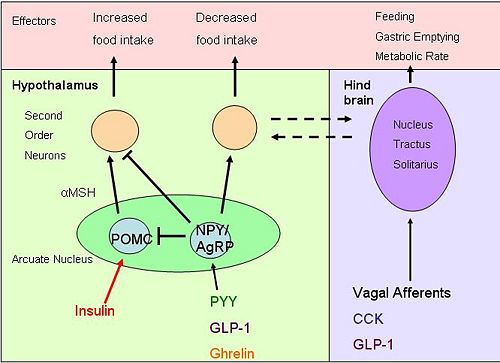 Obestatin, identified in 2005, is a sibling of ghrelin from preproghrelin.[14] Obestatin is found in the stomach, with most obestatin-producing cells found in the basal part of the mucosa.[15] Obestatin inhibits food intake and therefore opposes the effects of ghrelin. Obestatin reduces body weight gain, gastric empting, and also suppresses intestinal motility.[15] Some studies suggest that obestatin also has further physiological functions including regulation of energy homeostasis, cell proliferation, hormone secretion and inhibition of thirst.[16] Obestatin’s role in gut-brain signalling and the mechanisms that result in inhibition of appetite are still unclear.

Ghrelin is a 28-amino acid brain-gut peptide -cleaved from preproghrelin.[17] It is synthesised and secreted primarily by endocrine cells in the stomach, with appetite-inducing activities.[18][19] Initially Ghrelin was identified as an endogenous ligand for the growth hormone secretagogue receptor (GHS-R).[17] Endogenous levels of ghrelin change according to nutritional status; with levels increasing during fasting and immediately decreasing after food intake, providing evidence that it may be involved in food initiation. Administration of ghrelin (centrally and peripherally) results in appetite stimulation and increased food intake. Circulating concentrations of ghrelin are lower in obese people and are negatively correlated with body mass index.

Ghrelin's effects on eating behaviour are thought to be mediated mainly via the arcuate nucleus, where it activates neurons that express the appetite stimulating neuropeptides NPY and AgRP.[20]

However, the receptors through which ghrelin acts are expressed in some other parts of the brain and in peripheral tissues, and ghrelin also influences many other biological actions including effects such as gastrointestinal motility-stimulating gastric emptying, cardiovascular function, immunity, inflammation, pancreatic function, hormone secretion and memory among others.[17][17] It is still unclear how and to what extent ghrelin plays a role in food initiation.

Role of the Vagus Nerve

NPY and AgRP are co-expressed in a subpopulation of neurones in the arcuate nucleus of the hypothalamus, and are both potent stimulators of appetite. [23]. AgRP is an inverse agonist of melanocortin receptors [24]. One key mechanism by which NYP/AgRP neurones increase appetite is by antagonising the actions of α-MSH (produced by POMC cells of the arcuate nucleus) by binding to MC4 receptors [25], as α-MSH is a very potent appetite inhibitor. Luquet et al. selectively ablated the NPY/AgRP neurones using transgenic mice in which the human diphtheria toxin receptor was targetted to be expressed by AgRP-expressing neurones. If this ablation was done in neonates, the mice could compensate for the loss of neurones, and by the time they reached adulthood they had normal body weight and appetite. However when the neurones were ablated in adult mice, the mice lost all appetite.