Currently bariatric surgery is the most consistently effective treatment for obesity. Long-term studies show that this treatment can produce significant and sustained reduction in body weight, recovery from diabetes mellitus type 2, improvement in cardiovascular risk factors, and a reduction in mortality of 23% from 40%.[1] [2][3]:The U.S. National Institutes of Health recommends bariatric surgery for people with a body mass index (BMI) of > 40, and for people with BMI of > 35 who have serious coexisting medical conditions such as diabetes. This article discusses the specific bariatric operations and report how surgery affects hormonal modulation of both the gut-brain and adipose-brain axes. 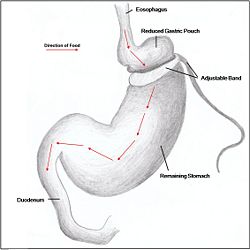 Figure 1. A reduced gastric pouch is formed as an adjustable band is placed below the cardia of the stomach. The band can be adjusted to decrease or increase the volume of the gastric pouch. 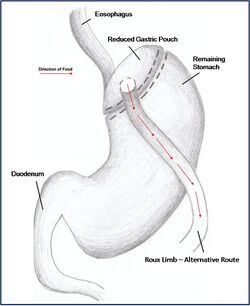 Figure 2. Roux-en-Y reduces the volume of the stomach by creating a smaller pouch. The Roux-limb is used as an alternative route for food and nutrients as the duodenum is bypassed as well. 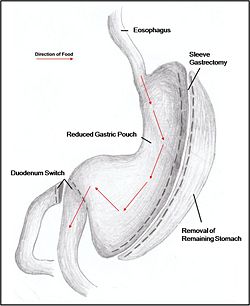 Figure 3. Sleeve Gastrectomy results in a large reduction in stomach size, promoting satiety even with reduced food intake. A dudodenal switch is sometimes performed with a gastrectomy to give further benefit from the malabsorption of calorie-intake.

For many severely obese patients, bariatric surgery has proved to be the only effective method in the long term treatment of obesity. Bariatric surgery works by altering the anatomy of the gastrointestinal tract. This limits the volume of food the stomach can hold, interferes with the absorption of calories, and interferes with orexigenic and anorexigenic signalling between the gut, adipose tissues and the brain. Bariatric surgical procedures are continually evolving, and some of the procedures currently in use are described here.

Jejuno-ileal bypass, duodenojejunal bypass and biliopancreatic bypass have all been performed to reduce the amount of calories absorbed by reducing the size of the stomach. However, as a result of extreme malnourishment, these procedures are now rarely performed. Instead, duodenal switches are the dominant form of malabsorptive surgery.

Combination surgery combines the benefits of both restrictive and malabsorptive surgery. The most common bariatric procedure in the USA is the Roux-en-Y Gastric Bypass (Fig. 2). Most restrictive procedures are performed in conjunction with a duodenum switch. For instance, a sleeve gastrectomy reduces the stomach size drastically while the additional switch of the duodenum reduces the amount of calories absorbed (Fig. 3).

The Efficacy of Surgery

There is substantial weight loss following bariatric surgery. A meta-analysis of studies of 10,172 patients reported that, on average, patients lose 61% of their weight; bilopancreatic diversion and duodenal switch procedures produce most weight loss (70% weight loss), followed closely by gastroplasty (68.2%) and gastric bypass (61.6%), with gastric banding ranked lowest (48%). [4] Bariatric surgery also improves several obesity related comorbidities which may prove to be of greater benefit than weight loss to the individual.

Fig. 4. Bariatric surgery alters appetite though modulation of both gut hormones via the gut-brain axis and the adipose hormones via the adipose-brain axis. Restrictive surgery (gastric banding and sleeve gastrectomy) reduce the size of the foregut. Foregut bypass surgery (Gastric bypass and biliopancreatic diverson) bypasses anatomical segments of the stomach and duodenum (foregut) exposing the hindgut (posterior part of the large intestine). Midgut bypass surgery (jejuno-ileal bypass) bypasses anatomical segments of the jejunum and ileum, exposing the hindgut.

Peptide tyrosine tyrosine (PYY) is a peptide belonging to the neuropeptide Y (NPY) family. PYY is normally released in proportion to calorie intake and has recently been described as an important feedback molecule in the Gut-Brain axis. As well as being a satiety signal, PPY has also been suggested to increase energy expenditure. After bypass and restrictive surgery, basal and postprandial PYY levels increase [5]. In addition, basal PYY levels increase after ileal resection, and patients have been reported to have lost weight [6]. By contrast, diet-induced weight loss did not increase PYY levels [7].

Glucagon-like peptide-1 (GLP-1), like PYY, as a circulating peptide hormone that acts on the hypothalamus as an anorexigenic signal. Most patients show a marked increase in basal and postprandial concentrations of GLP-1 after foregut bypass surgery. Midgut bypass also increases GLP-1 secretion, but studies on restrictive surgery have shown either no change or a decrease in basal levels of GLP-1. Of specific interest GLP-1 has been shown to improve postprandial glycaemic control, being a potent incretin mimetic. A GLP-1 agonist, exenatide, has not yet been approved for use as an anti-obesity drug, but is being used to treat type 2 diabetes mellitus <refname=Ashrafian />

Neurotensin (NT), is an anorexigenic signal whose expression is downregulated in ob/ob (leptin deficient) mice. Following bypass surgeries (5 of 6 reported) an increase in NT levels has been demonstrated which could contribute to the anorexigenic effects (Ashrafian H, le Roux CW, 2009).

Ghrelin is an orexigenic hormone released from the fundus of the stomach. As a result, ghrelin levels increase when calorie intake is reduced during dieting. However, of 42 studies following foregut bypass surgeries, only 50% reported a decrease in ghrelin release. Many of these studies reported ghrelin levels immediately after surgery, whereas studies of long term ghrelin change following surgery show no significant trend. Results for restrictive surgeries show only an 18% decrease in circulating concentrations of ghrelin. [8] [9].

Cholecystokinin (CKK) was the first anorexigenic gut peptide to be implicated in the control of appetite [10]. However, studies suggest that it plays no role in the changes in appetite following bariatric surgery [5]

Glucose-dependent Insulinotrophic Peptide (GIP) is a hormone produced in the foregut, and released when simple, energy-dense nutrients like glucose and free fatty acids are present. and it promotes nutrient (energy) storage [11]. Those with obesity and diabetes often have a diet-induced, chronic elevation in GIP levels with peripheral receptor down-regulation that is analogous to insulin insensitivity. Diet-induced weight loss increases GIP levels after a nutrient-rich meal and prevents further weight loss because the body counters the perceived starvation by increasing nutrient deposition in central and peripheral stores. By contrast, proximal foregut bypass surgery, roux-en-Y gastric bypass and biliopancreatic diversion with duodenal switch decrease GIP levels.

Surgical Treatment as Opposed to Diet

It is still not clear how bariatric surgery works, but it is thought to increase energy metabolism, reduce orexigenic signals, increase anorexigenic signals and to interfere with calorie absorption. After diet-induced weight loss, orexigenic hormones like ghrelin are released in abundance as the body is in 'starvation mode' - increasing the chances of the individual to over-eat to regain energy therefore regaining the weight. However, although bariatric surgery similarly induces weight loss - the reduction in stomach size allows a proportionate decrease in ghrelin released. Hence, although there is reduced calorie intake, less orexigenic signals are released.[8]

Under fasting conditions, most obese people have lower circulating concentrations of PYY than those who are lean. A year after bariatric surgery, such as jejunoileal bypass and vertical banding, the levels of fasting PYY are increased. Moreover, concentrations within an hour of eating did not seem to change considerably - whether in an obese, lean, or postoperative. However, after Roux-en-Y gastric bypass, there is a postprandial PYY surge. It is believed that the reason for this is the removal of the pylorus (as well as a portion of the stomach) that allows food to enter the small intestine more quickly. This early rise in PYY levels will therefore also induce satiety early. Again, although such cases have been reported, controversy still surrounds the exact mechanisms and effects of surgery on PYY levels due to the variability between individuals.

Type 2 diabetes develops in about 41% of obese patients - the correlative link is commonly termed Diabesity. Diet-induced weight loss ameliorates the insulin response but not to the extent where euglycemia is restored. Furthermore, when weight is re-gained after diets it is often accompanied by the re-establishment of insulin resistance. After biliopancreatic diversion with Roux-en-Y gastric bypass, insulin sensitivity improves. Within a year after bariatric surgery, despite the weight loss achieved, patients are usually still obese (with a BMI of ~30 kg/m2), but improvements of insulin resistance occur a few months after the operation. Therefore, the initial improvement of type 2 diabetes following bariatric surgery seems to take place while the patient is still obese.[12].

Complications from weight loss surgery are frequent.[14] The reduction in intestinal absorptive capacity may cause, for instance, persistent anemia only reversible though the intravenous route.[15] Although perioperative mortality may be low in selected surgical centers[16], perioperative mortality is higher in unselected centers[17], especially if the surgeons has done less than 35 procedures in the last 6 years.[17]

A clinical prediction rule can estimate complications.[18][19] In this rule, 1 point is given for each of 5 preoperative variables:

Based on the number of points, risk classfication is: