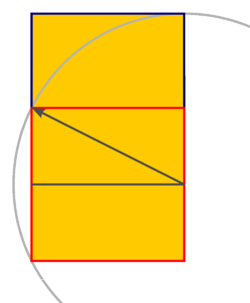 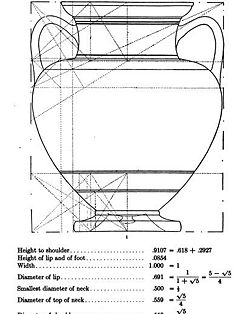 illustrating geometric proportions in an Attic Greek amphora, including the Golden Proportion: .618 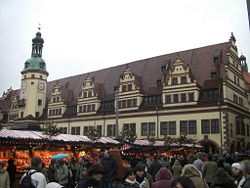 PD Image
The old townhall in Leipzig. The tower is positioned between the right (a) and left (b) sections so that

The golden ratio is a mathematical proportion that is important in the arts and interesting to mathematicians. In architecture and painting, some works have been proportioned to approximate the golden ratio ever since antiquity. The ratio itself is also known as the mean and extreme ratio, the golden section, the golden mean, and the divine proportion. The earliest existing description is found in the Elements of Euclid (Book 5, definition 3): A straight line is said to have been cut in extreme and mean ratio when, as the whole line is to the greater segment, so is the greater to the less.

Johannes Kepler took considerable interest in the subject, and in his 1596 book, Mysterium Cosmographicum, wrote:

Geometry has two great treasures; one is the Theorem of Pythagoras; the other, the division of a line into extreme and mean ratio. The first we may compare to a measure of gold, the second we may name a precious jewel.

Kepler seems to have particularly associated this ratio with forms of plants, and all organic growth.[1] In more recent years Jay Hambidge wrote several books devoted entirely to the Golden ratio, pointing out many instances of its presence on organic forms, as well as in the art and architecture of Attic Greece.

It has been claimed that the golden ratio is found in the proportions of architectural structures ranging from the Great Pyramid of Giza[2], to the Parthenon[3], to Chartres Cathedral[4]. In the 20th century, the golden section was applied by the French architect Le Corbusier[5], who used the proportion in the design of virtually all his architectural works, and in his painting, and who wrote a series of books on the subject called The Modulor[6].

To elaborate: if there is a longer line segment

and a shorter line segment

, and if the ratio between

is equal to the ratio between the line segment

, this ratio is the golden ratio

a quadratic equation with the solutions

we could derive the infinite continued fraction of the golden ratio:

is the n-th term of the Fibonacci sequence.