Leipzig is a city in the federal state of Saxony, Germany. With a population of 507,360[1] it is the second largest city in the eastern part of Germany and the largest city of Saxony. It has an area of 297.6 km²[2].

The mayor of Leipzig is Burkhard Jung (SPD). He was elected in 2006. His predecessor Wolfgang Tiefensee left Leipzig in 2005 and became Federal Minister of Transport, Building and Urban Affairs of Germany.

Leipzig is famous for its large Gründerzeit style housing areas. 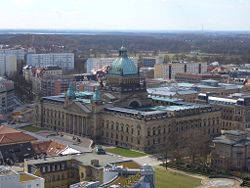 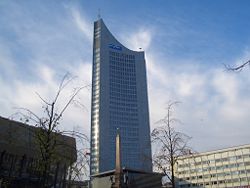 (CC) Photo: Alexander Wiebel
City-Hochhaus with parts of the Gewandhaus (left) and university main building (right). It belonged to the university's city campus.

Some of the historically and architecturally important buildings are listed in the following:

Home of the famous Gewandhaus Orchestra. The current Gewandhaus ist the third building with this name.

Home of the Federal Administrative Court of Germany.

Though built in the beginning of the 20th century, its style resembles a castle.

Formerly known as Uni Riese (University Giant) it belonged to the university's city campus when it was built.

The university of Leipzig is the second eldest university in modern Germany. In addition to the university there exist a couple of universities of applied sciences ("Fachhochschule"), music schools and art schools. Research is conducted at the university, three Max Planck institutes and several smaller institutes.