From Citizendium
(Redirected from Glutamate)
Jump to: navigation, search 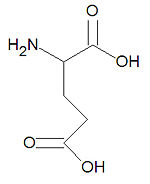 Glutamic acid, also called glutamate and abbreviated as Glu or E, is one of the twenty common amino acids used by living organisms to build proteins. It is one of only two acidic amino acids, the other being aspartic acid, and it is similar to glutamine which has an amide function in place of the acid. Being hydrophilic, glutamate is often found on the surfaces of proteins. Glutamate also serves as an energy source in the brain, is the chemical precursor for the amino acids glutamine, proline and arginine, and most of the amino acids derive their

-amino nitrogen atom from the glutamate

-amino nitrogen by transamination. Glutamate is a major neurotransmitter in the brain.

Synthesis and conversion of glutamic acid

-ketoglutarate to form L-glutamic acid. This reaction is reversible.

(CC) Image: David E. Volk
Synthesis of glutamic acid and glutamine. Note that the neutral forms of the chemicals are shown here rather that the deprotonated acid functions and protonated amine groups.

Three amino acids are derived from glutamate, namely glutamine, proline and arginine. The enzyme glutamine synthetase catalyzes the reaction between glutamate and ammonium ion, with energy derived from the hydrolysis of ATP. Nitrogen metabolism is largely controlled by glutamine synthetase and glutamate dehydrogenase which are present in all living organisms, and most procaryotes also have the enzyme glutamate synthase to catalyze the reductive amination of

The non-essential amino acids proline and arginine are derived from glutamate through several steps. First, glutamate is converted to an acyl phosphate by reacting with ATP, and the acyl phosphate is reduced to glutamatic-γ-semialdehyde by NADPH. The semialdehyde can be converted to ornithine, which is a precursor of arginine, or it can cyclize to from Δ'-Pyrroline-5-carboxylate, which can be reduced by NADPH to from proline.

(CC) Image: David E. Volk
Biosynthesis of proline via glutamate semialdehyde and pyrroline. Note that the neutral forms of the chemicals are shown, rather than deprotonated acid groups and protonated amino groups.
Retrieved from "https://en.citizendium.org/wiki?title=Glutamic_acid&oldid=100508617"
Categories:
Hidden categories: