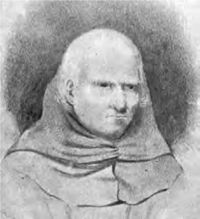 Gerónimo Boscana (Jerónimo Boscana) (1776–1831) was a Roman Catholic priest and early nineteenth-century Franciscan missionary in Spanish and Mexican California. He is noted for producing the most detailed ethnographic picture of a Native Californian culture to come out of the Missionary Period, an account that "...for his time and profession, is liberal and enlightened." [1] Born at Llumayor on the Island of Mallorca, Spain in 1776, Boscana was educated at Palma and joined the Franciscan order in 1792. He traveled to Mexico in 1803 and to California in 1806, where he served at the Mission Nuestra Señora de la Soledad, Mission La Purísima Concepción, Mission San Luis Rey de Francia, and Mission San Gabriel Arcángel. For more than a decade (from 1812–1826) he was stationed at Mission San Juan Capistrano. He died at San Gabriel in 1831, and is the only missionary to be interred in its cemetery among over 2,000 former inhabitants.

Boscana's first ethnographic contribution resulted from an 1812 questionnaire sent by the Spanish government to the missionaries of Alta California. The task of preparing a response on behalf of San Juan Capistrano may have stimulated the missionary's latent interest in the native culture. While at San Juan Capistrano, Boscana composed two versions of a detailed ethnographic sketch of the Juaneño Indians, who were primarily speakers of a dialect of Luiseńo but probably also included Gabrieliño speakers from the north. One version of Boscana's manuscript ("Chinigchinich; a Historical Account of the Origin, Customs, and Traditions of the Indians at the Missionary Establishment of St. Juan Capistrano, Alta California Called The Acagchemem Nation") was translated by Alfred Robinson and published in 1846 as an appendix to his book Life in California. Robinson was apparently responsible for giving the title "Chinigchinich" to Boscana's work. An edition of this version with extensive annotations by the anthropologist and linguist John Peabody Harrington was published in 1933.