Mission San Gabriel Arcángel is a former religious outpost established by Spanish colonists on the west coast of North America in the present-day State of California. Founded on September 8 ("The Feast of the Birth of the Blessed Virgin Mary"), 1771 by Roman Catholics of the Franciscan Order, the settlement was the fourth in the twenty-one mission Alta California chain. Named after Saint Gabriel the Archangel, the Mission (site of the first hospital in Alta California) has been historically referred to as the "Godmother of the Pueblo of Los Angeles." Mission San Gabriel also unknowingly witnessed the origin of the California citrus industry with the planting of the region's first significant orchard in 1804. Designated as a historic landmark at both the state and national levels, today the Mission serves as a museum as well as a parish church within the Roman Catholic Archdiocese of Los Angeles.

The Mission was founded on September 8, 1771. The original intent was to locate the settlement along the banks of the Río de los Temblores (the River of the Earthquakes — the Santa Ana River). However, the priests instead chose an alternate site on a fertile plain located directly alongside the Rio Hondo in the Whittier Narrows.[15] The site of the Misión Vieja (or "Old Mission") is located near the intersection of San Gabriel Boulevard and Lincoln Avenue in Montebello, California (known to the natives as Shevaanga). In 1776, a flash flood destroyed much of the crops and ruined the Mission complex, which was subsequently relocated five miles closer to the mountains in present-day San Gabriel (the native settlement of 'Iisanchanga). The Mission (dubbed the "Godmother of the Pueblo of Los Angeles" [16]) functioned as the base from which the expedition that was to found the pueblo that became the City of Los Angeles, was sent. On December 8, 1812 (the "Feast Day of the Immaculate Conception of the Blessed Virgin") a series of massive earthquakes shook Southern California. The chapel was designed by Father Antonio Cruzado who hailed from Córdoba, Spain, which accounts for the strong Moorish influence. The 1812 Wrightwood Earthquake caused the three-bell campanario, located adjacent to the chapel's east façade, to collapse. A larger, six-bell structure was subsequently constructed at the far end of the capilla. While no pictorial record exists to document what the original structure looked like, architectural historian Rexford Newcomb deduced the design and published a depiction in his 1916 work The Franciscan Mission Architecture of Alta California.

Legend has it that the founding expedition was confronted by a large group of native Shoshone peoples whose intention was to drive the strangers away. One of the padres laid a painting of "Our Lady of Sorrows" on the ground for all to see, whereupon the natives (known to the settlers as the Gabrieliños) immediately made peace with the missionaries, so moved were they by the painting's beauty.[2] Today the 300-year-old piece hangs in the Mission's reredos (sanctuary). A large stone cross stands in the center of the campo santo (cemetery), first consecrated in 1778 and then again on January 29, 1939 by Los Angeles Archbishop John Cantwell. It serves as the final resting place for some 6,000 "neophytes;" a small stone marker denotes the gravesite of José de Los Santos, the last native to be buried on the grounds at the age of 101 in February, 1921. Also interred at the Mission are the bodies of numerous padres who died during their time of service, as well as the remains of Reverend Raymond Catalan, C.M.F., who undertook the restoration of the Mission's gardens. Entombed at the foot of the altar are the remains of eight Franciscan priests (listed in order of interment): Father Miguel Sánchez, Father Antonio Cruzado, Father Francisco Dumetz, Father Roman Ulibarri, Father Joaquin P. Nuez, Father Gerónimo Boscana, Father José Bernardo Sánchez, and Father Blas Ordaz. Buried among the padres is centenarian Eulalia Perez de Guillén Mariné, the "keeper of the keys" under Spanish rule; her grave is marked by a bench dedicated in her memory.

In its heyday the outpost furnished food and supplies to settlements and other missions throughout California.

A majority of the Mission structures fell into ruins after it was secularized in November 1834.

President James Buchanan signed a proclamation on November 19, 1859 that restored ownership of the Mission proper to the Roman Catholic Church.[17] The Mission's chapel functioned as a parish church for the City of San Gabriel from 1862 until 1908, when the Claretian Missionary Fathers came to San Gabriel and began the job of rebuilding and restoring the Mission.

On October 1, 1987 the Whittier Narrows Earthquake further damaged the property. A significant portion of the original complex has since been restored.

The City of San Gabriel refers to itself as the "City with a Mission." 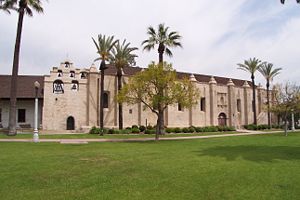 (CC) Photo: Robert A. Estremo
A view of Mission San Gabriel Arcángel in April, 2005 The open stairway at the far right leads to the choir loft, and to the left is the six-bell campanario ("bell wall") that was built after the original bell structure, located at the far end of the church, toppled during the Wrightwood Earthquake of 1812. 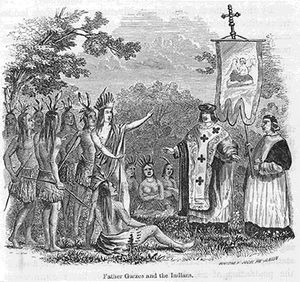 The goal of the missions was, above all, to become self-sufficient in relatively short order. Farming, therefore, was the most important industry of any mission. Prior to the establishment of the missions, the native peoples knew only how to utilize bone, seashells, stone, and wood for building, tool making, weapons, and so forth. The missionaries discovered that the Indians, who regarded labor as degrading to the masculine sex, had to be taught industry in order to learn how to be self-supportive. The result was the establishment of a great manual training school that comprised agriculture, the mechanical arts, and the raising and care of livestock. Everything consumed and otherwise utilized by the natives was produced at the missions under the supervision of the padres; thus, the neophytes not only supported themselves, but after 1811 sustained the entire military and civil government of California.[18]

Bells were vitally important to daily life at any mission. The bells were rung at mealtimes, to call the Mission residents to work and to religious services, during births and funerals, to signal the approach of a ship or returning missionary, and at other times; novices were instructed in the intricate rituals associated with the ringing the mission bells.