Mission San Luis Rey de Francia is a former religious outpost established by Spanish colonists on the west coast of North America in the present-day State of California. Founded on June 13, 1798 by Roman Catholics of the Franciscan Order, the settlement was the eighteenth in the twenty-one mission Alta California chain. Named after a 13th-century French monarch, the outpost boasts the largest intact mission chapel in Southern California, earning it the nickname, "King of the Missions." Designated as a historic landmark at both the state and national levels, today the Mission serves as a museum and as a Franciscan College.

The estimated pre-contact population of the local Quechnajuichom people was 10,000.[16] The natives lived in autonomous village groups that hunted, fished, and foraged in specific territories. In time the tribe became known as the Luiseño, after the Mission.

In its prime, the San Luis Rey compound covered almost 6 acres, making it one of the most extensive of all the missions.[17] An early account of life at the Mission was written by one of its neophytes, Pablo Tac, in his work Indian Life and Customs at Mission San Luis Rey: A Record of California Mission Life by Pablo Tac, An Indian Neophyte (written in Rome circa 1835, edited and translated by Minna Hewes and Gordon Hewes in 1958). In the book, Tac lamented the rapid decline of his people:

In Quechla not long ago there were 5,000 souls, with all their neighboring lands. Through a sickness that came to California 2,000 souls died, and 3,000 were left.[18]

Tac went on to describe the preferential treatment the padres received:

In the mission of San Luis Rey de Francia the Fernandino [sic] father is like a king. He has his pages, alcaldes, majordomos, musicians, soldiers, gardens, ranchos, livestock....[19]

The Mission-born, Franciscan-educated Tac noted that his people initially attempted to bar the Spaniards from their southern California lands. When the foreigners approached, "...the chief stood up...and met them," demanding, "...what are you looking for? Leave our country!" In 1816, the San Antonio de Pala Asistencia was established twenty miles inland to minister to the needs of the local Cahuilla tribe. During the Mexican-American War, the Mission was utilized as a military outpost by the United States Army.[17] Mission San Luis Rey reached the height of its prosperity in 1818, becoming "The largest and most populous Indian mission of both Americas." [3] The Mission maintained a vast network of outlying ranchos and asistencias, spread out over a 1,000-square-mile area.

President Abraham Lincoln signed a proclamation in March, 1865 that restored ownership of the Mission proper to the Roman Catholic Church.[20] Following secularization, no religious services were held at the Mission until 1893, when two Mexican priests were given permission to restore the Mission as a Franciscan college, a function the facility continues to serve today.[17] Father Joseph O'Keefe was assigned as an interpreter for the monks. It was he who began to restore the old Mission in 1895.

Repairs to the cuadrángulo (quadrangle) and church were completed in 1905. Today, Mission San Luis Rey de Francia serves as a Franciscan college. The fourth episode of the Walt Disney television series Zorro was filmed on the Mission grounds. The story line purported that the Mission was haunted, and the episode (entitled "The Ghost of the Mission") was aired on Halloween (October 31, 1957). 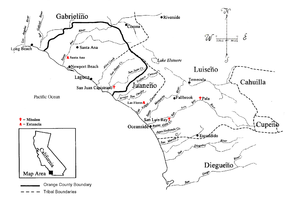 Las Flores Estancia and the location of the missions at San Juan Capistrano, San Luis Rey, and Pala along with the Santa Ana Estancia are shown above. Also shown are the territorial boundaries of the Southern California Indian tribes based on dialect, including the Cahuilla, Cupeño, Diegueño, Gabrieliño, Juaneño, and Luiseño language groups.[21]

The goal of the missions was, above all, to become self-sufficient in relatively short order. Farming, therefore, was the most important industry of any mission. Prior to the establishment of the missions, the native peoples knew only how to utilize bone, seashells, stone, and wood for building, tool making, weapons, and so forth. The missionaries discovered that the Indians, who regarded labor as degrading to the masculine sex, had to be taught industry in order to learn how to be self-supportive. The result was the establishment of a great manual training school that comprised agriculture, the mechanical arts, and the raising and care of livestock. Everything consumed and otherwise utilized by the natives was produced at the missions under the supervision of the padres; thus, the neophytes not only supported themselves, but after 1811 sustained the entire military and civil government of California.[22]

Bells were vitally important to daily life at any mission. The bells were rung at mealtimes, to call the Mission residents to work and to religious services, during births and funerals, to signal the approach of a ship or returning missionary, and at other times; novices were instructed in the intricate rituals associated with the ringing the mission bells.