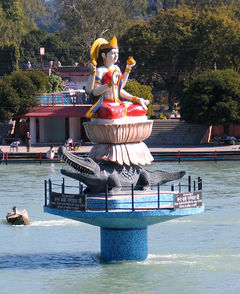 In Hindu tradition the Ganga river is a deity and its waters are holy. In Hinduism the very name Ganga collectively represents all bodies of water. The symbolic and religious importance of Ganga is unchallenged in India.

The Ganga has an important position in Hindu culture and is mentioned in all Hindustan's sacred books. In Hindu mythology Ganga is the daughter of the mountain god Himavan (Himalaya, Meru) and the sister of Uma (consort of Lord Shiva).

Hindus believe that bathing in the river cleanses one's sins, and Ganges water is used extensively in Hindu ritual.

The story of Ganga’s descent begins in the time of Lord Vishnu's incarnation as universe enveloping Trivikrama during Vamana Avatar, and with the arrogant ruler 'Sagara' consumed by ambition to conquer the world and destroying all who challenge him. With his power growing and nobody to stop him, the gods in Heaven intervene and fool him into conducting an Ashwamedha (horse) ritual, a ceremony of power reserved for the gods. The sacrificial horse is stolen by God 'Indra' who hides it in the netherworld. Sagara’s 60,000 equally arrogant sons (born of his first wife) Sagara Putra follow the horse into sage Kapila's netherworld hermitage where they are instantly turned to ashes by the angry sage (himself an avatar of Vishnu) for daring to disrupt his meditation. With King Sagara consumed by grief, it seems salvation of King Sagara's line is doomed for generations.

Sagara's great-grandson 'Bhagiratha' (from Sagara's son Asamanjas of his second wife) after becoming King then continues the great penance of his father Anshuman to release their ancestors. Deeply stirred by the fate of his ancestors, he leaves his throne to undergo two long and arduous penances in the Himalayas to bring Goddess Ganga to Earth so that her holy water could be used to liberate the souls of his ancestors and release them to heaven. His penance greatly pleases the gods and Lord Brahma directs an unwilling Ganga to descend to Earth while Lord Shiva agrees to absorb Ganga's angry descent in his locks of hair, which alone can withstand Ganga's vow to smash the earth by her power. In Hindu canto of 'Bhawagad Purana' (Book VIII) and the 'Ramayana', Lord Brahma releases Ganga from his palm to wash the feet of Lord Vishnu which is absorbed by Lord Shiva's matted locks. The canto also says that the Ganga which Lord Brahma released as water is composed of the Vedas, a stream of knowledge.

Bhag. Pur. Bk. VIII, ch. 18.And the righteous Bali held on the crown of his head that auspicious and sacred water with which Hari's feet had been washed, and which is capable of destroying the sins of one's race, — (that water) which was held on his head in profound reverence by that god of gods Girisa (Siva) who is wearing the moon (as an ornament) on his forehead.

With Ganga safely on earth, Bhagiratha performs his third penance and Lord Shiva releases Ganga from the netherworld in several streams. Ganga then follows Bhagiratha (astride the ritual horse) across mountains, forests and plains to his ancestors’ ashes at Ganga Sagar. Having purified their ashes and paved their way to heaven, Ganga disappears into the ocean to again ascend to heaven. (In another myth the ocean had been previously swallowed by sage 'Agastya' as a boon to end a war between the humans and ocean dwelling demons).

NB: This myth is regarded as a simple description of the hydrologic cycle.