From Citizendium
(Redirected from Ganges River)
Jump to: navigation, search

Article Authors : P.Singh
Ganga, official name "Ganga/Ganges"[1], (archaic Ganges) is a major river system in the Indian subcontinent flowing East through North India's Gangetic plains, traversing 2,525 km in the course to discharge into the Bay of Bengal through its vast delta in the Sunderbans and Bangladesh. Several important tributaries add their waters during this journey to make Ganga the 3rd largest river in the world by discharge volume after the Amazon and Congo rivers.

The headstreams of the River Ganges in India's upper course are famous tourist attractions important to local economies, for spiritual tourism and Rafting in Rishikesh.

The Ganges river is considered sacred to Indians since ancient times and worshiped as the Goddess Ganga. Hindus make pilgrimages to it, especially to its sources and the cities of Haridwar, Varanasi and Allahabad (Triveni confluence of the Yamuna). On its banks are cremation pyres (ghats) and ritual steps for immersing ashes in the water of dead Hindus and performed ritual ablutions.

Ganga is traditionally divided into two parts: the upper course (about 800 km from the source to the city of Kanpur), lower course (from Kanpur to the Farakka Barrage).

Course of the Ganga 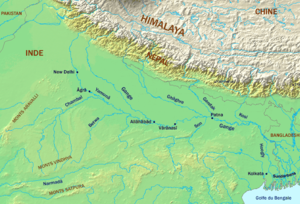 Course of Ganga river and tributaries

Tributaries of the Ganga

Other than the Yamuna river, the major water-rich tributaries of the Ganges flow to the left. Originating mostly in the Himalayas they mitigate the low dissolved oxygen and pollutant concentration of the main stream. However, some of these tributaries also cause the largest flood hazard zone of the Ganges and regular overflowing of its high water banks causing destruction. The natural drainage network is now greatly altered by dense networks of artificial irrigation channels. Consequently Ganga and Yamuna have much of their flow diverted into irrigation canals and water treatment plants.

Cities on the Ganga 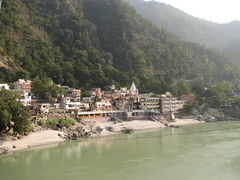 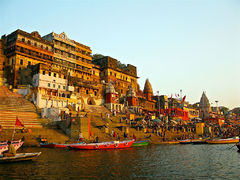 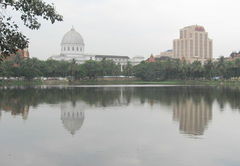 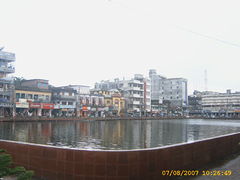 The valley of the Ganges is one of the most densely populated places on the planet. Below are the largest of the cities located directly on the river. The list is sorted along the course, with the exception of the delta (in the state of West Bengal and Bangladesh). Most of West Bengal and almost a third of the territory of Bangladesh enter directly into the Ganga basin. Specified in the list of the city are located mainly on the distributaries Hooghly and Padma (main channel) as well as numerous small ducts. 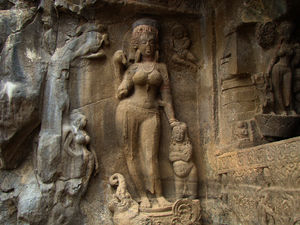 The river Ganga is generally regarded, since ancient times, amongst the world's most important and holy rivers. It is held sacred by Indians, especially Hindus, and is also worshiped in its anthropomorphic form as the Goddess Ganga, emerging, from Bhagirathi her source, at Gangotri Glacier (in the Central Himalayan state of Uttarakhand) at Gaumukh (elevation 3,892 m). Ganga is embodied at Devprayag when the rampant Alaknanda joins swirling Bhagirathi. Numerous other streams join Himalayan Ganga, among these Mandakini, Dhauliganga, Bhilangana and Pindar are significant.

Ganga in the Doab 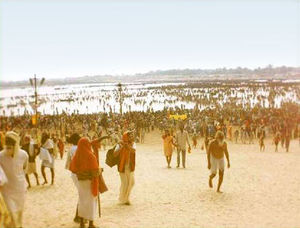 According to legend, Allahabad Triveni (triple confluence) is one of the four places where the celestial bird Garuda spilled the immortality elixir Amrita from its holy pitcher, and why Hindus hold major Hindu festival - Kumbh Mela, or "Festival of pitchers."

Allahabad (Prayag also - "the confluence" or Aggra - "place of sacrifice"), located at the confluence of the Ganges with the Jumna (Yamuna), is considered the place where Brahma was brought first sacrifice after creating the world. This is the second of the four places where Garuda spilled amrita, and is also the venue for the festival of Kumbh Mela. This is where the legend comes to the surface and joins the sacred river Ganges Rig Veda - Saraswati, which later disappears from the surface of the Earth.

The sanctity of Ganga in Bengal predates the arrival of Indo-Aryans. After their arrival and association of Ganga river with Aryan purity, important places of pilgrimage came up at Nawadeep, Triveni, Katwa, Ganga Sagar and Kalighat (near Kolkatta). 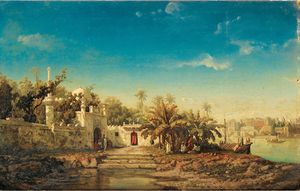 Mosque on the banks of the Ganga river India, Auguste Borget, oil on canvas, 1846

Leading Islamic clerics in India have agreed that it is the duty of both Hindus and Muslims to protect and save Ganga, a national river, as both communities live on its banks and earn livelihood from it.[6] Ganga Jamni tehzeeb is an ancient tradition in the Awadhi doab area for the coexisting of the Hindoos and Moslems by participating in each others social functions. Ganga Jamni tehzeeb fuses the best elements of Persian and Mughal cultures ensuring Khayal, Ghazal, Thumri, Kathak and Banarsi Raas rang flourish.

The portions of the eastern sub-delta of the Ganga is known as Padma and had no religious significance or historical places of pilgrimage for Indians unlike in West Bengal along the banks of the Bhagirathi-Hooghly section known a Adi Ganga. The eastern deltaic portions mainly in Bangladesh were always cut off symbolically from Indo-Aryan culture and mythology.[7]

From a discourse on Dharma