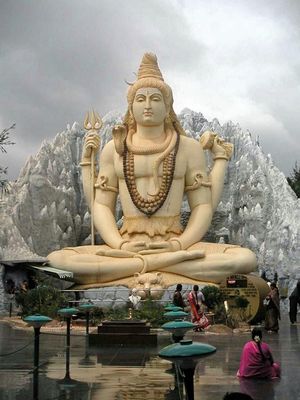 A statue of Lord Shiva meditating in Bangalore, India

Shiva is the destroyer of the world, in Hinduism, following Brahma the creator and Vishnu the preserver, after which Brahma again creates the world and so on. Shiva is responsible for change both in the form of death and destruction and in the positive sense of the shedding of old habits. In Satyam, Shivam, Sundaram or Truth, Goodness and Beauty, Shiva also represents the most essential goodness.

Shiva is the god of the yogis, self-controlled and celibate, while at the same time a lover of his spouse Shakti. Shiva's first wife was Sati and his second wife was Parvati, also known as Uma, Gauri, Durga, Kali and Shakti. His sons are Ganesha and Kartikeya. Shiva lives on Mount Kailasa in the Himalayas.

Shiva's main attributes are the trident that represents the three gunas and the snakes that show he is beyond the power of death and poison and also stand for the Kundalini energy. The vehicle of Shiva is the white bull called Nandi (the joyful). He is often seated on a tiger skin or wears a tiger skin, with the tiger representing the mind.

Shiva has many forms, which are visible in his Panchavaktra form with 5 heads, a combination of all Shiva energies : Aghora (resides in the creamation grounds), Ishana (most often appears as the shivalingam), Tat Purusha (meditating), Varna Deva (the eternal Shiva) and Saddyojat or Braddha Rudra (the old wrathful form). The last also forms the connection to the Rudraksha mala - a rosary made of the dried fruits of the Rudraksha tree.

Shiva Nataraj's dance represents both the destruction and the creation of the universe and reveals the cycles of death, birth and rebirth. His Dance of Bliss is for the welfare of the world. In the pose of Nataraj, the King of Dance is giving darshan to his beloved devotees within the "Hall of Consciousness", which is the heart of man. Under his feet, Shiva crushes the demon of ignorance called Apasmara Purusha, caused by forgetfulness. One hand is stretched across his chest and points towards the uplifted foot, indicating the release from earthly bondage of the devotee. The fire represents the final destruction of creation, but the dance of the Nataraj is also an act of creation, which arouses dormant energies and scatters the ashes of the universe in a pattern that will be the design of the ensuing creation.

Shiva is conceived in his unborn, invisible form as the Lingam. It is always accompagnied by the Yoni, which is the female principle, surrounding the base of the Lingam. The Lingam represents the male creative energy of Shiva.

When Ganga incarnated on Earth, Shiva captured her in his hair to avoid that she would flood all of Earth.

Shiva worshipers are among India's most ascetic yogis, their body smeared with ashes, dressed in saffron colors and wearing a Rudraksha mala.