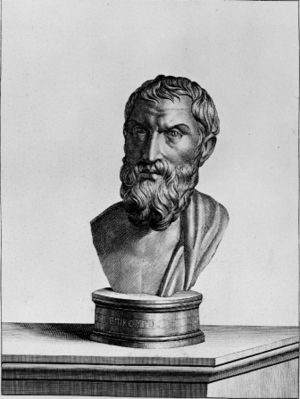 An engraving of a marble bust of Epicurus excavated from Herculaneum

Epicurus (Greek: Ἐπίκουρος) (341 BCE – 270 BCE) was an ancient Greek philosopher and the founder of Epicureanism, one of the several schools of philosophy from the Hellenistic period. He was a prolific author, though very few of his works have survived to the modern day and all but a few fragments have come from excerpts in other, later authors. During his life his school had a sizable following at The Garden, an estate he purchased in Athens halfway between the Stoa and the Academy.

His philosophy was characterized by a focus on attaining ἀταραξία (ataraxia, calmness or a lack of anxiety). To reach this state, he exhorted his followers to not fear the gods or death and to remember that what is good is easy to get and what is bad is easy to endure. Epicurus strengthened his ethical arguments by relying on his materialist, atomist physics, following in the footsteps of the early atomists Democritus and Leucippus. Relying on consequences of this physics he developed an epistemology he called the κανών (canon, ruler or measure), as it provides a method for measuring the validity of a sense perception.

Very little is known with certainty about Epicurus' life, due to the lack of any evidence from his lifetime. Rather, we must rely on the reports of others, writing usually several hundred years after his death. In particular, the biography by Diogenes Laertius in the last book of his Lives and Opinions of Eminent Philosophers, written most likely in the first half of the third century CE, provides most of what is supposed to be true about Epicurus' life.

According to that account, Epicurus was born to Neocles and Chaerestrate, two otherwise unknown Athenians, on the island of Samos. His parents likely moved there as colonists after Athens seized the island from the Persian Empire. There he began his philosophical training under the tutelage of the Platonist Pamphilus of Samos.[1] He turned to philosophy, according to the likely apocryphal account, because his school teacher could not explain to him the concept of chaos (χάος) in Hesiod's writings.[2]

He moved to Athens when he was 18 to fulfill his required military service as an ephebe, but left again shortly thereafter when his parents wer expelled from Samos, along with the other Athenians, when Athens lost the island to Macedonia during the Lamian War. Epicurus then stayed with his parents in Colophon for a time and continued to study philosophy and began to attract disciples.

Diogenes Laertius reports that several ancient chronologers claimed that Epicurus studied under Nausiphanes in Teos for several years, though it is unclear whether this was supposed to have occurred before coming to Athens or after.[3] Nausiphanes was a disciple of Democritus, whose philosophy centered on atomism, a cornerstone of Epicureanism. Epicurus himself denied that he learned from Nausiphanes and claims that he was self-taught.[4] This claim likely led to the attack, quoted by Diogenes Laertius, that Epicurus claimed to have invented atomism, rather than Democritus.[5] It is now widely accepted that Democritus, either alone or following Leucippus, first based a philosophy on atomism and that Epicurus was likely influenced heavily by him.[6]

He finally returned to Athens in the archonship of Anaxicrates (307 – 6 BCE) and shortly thereafter purchased the property that would become his communal Garden (ὁ κῆπος). There he studied and practiced philosophy with his followers until his death at 72 years of age in he second year of the 127th Olympiad (270 BCE). He died of a kidney stone and according to his will left his Garden to Hermarchus so that he could continue the study of his philosophy there.

Diogenes Laertius claims that Epicurus was a prolific writer, having written about three hundred rolls (κύλινδροι, literally cylinders) of papyrus.[7] Of those many works, the only preserved in their entirety are preserved in Diogenes Laertius: the Letter to Herodotus[8], an epitome of his physics, the Letter to Pythocles[9], a treatise on astronomy and meteorology, the Letter to Menoeceus[10], an epitome of his ethics, and the Sovran Maxims or Principal Doctrines (Κύριαι δόξαι)[11], a collection of short sayings encompassing the central tenets of Epicureanism.

The rest of his works are known only from quotations and summaries in other authors, such as Philodemus, Cicero, Plutarch, Eusebius, and Lactantius[12], or in fragments of writings found at the Villa of the Papyri at Herculaneum and elsewhere.[13] The majority of these fragments come from his magnum opus On Nature (Περὶ φύσεως), a 37-book exposition of his physical system. Fragments of other works are preserved in a large inscription by Diogenes of Oenoanda, found at Oenoanda in Lycia, modern-day Turkey[14]. Of his remaining works, little else is known other than the titles. It is believed that further fragments await discovery at Herculaneum, where excavation has been halted since the 1990s and that previously obscure papyri will be better read using multi-spectral imaging.

There are also works of uncertain, but certainly Epicurean origin that have been attributed to Epicurus. Principle among these are the Vatican Sayings, a collection of Epicurean sayings, many of which are certainly not by Epicurus, but several of which overlap the Principal Doctrines and are presumed authentic.

The essence and goal of Epicureanism is to reach a state of complete happiness, in which one could not become any happier. In order to do this, one must have a correct understanding of the world. Hence, the physics inform the canon, both of which inform the ethics, which encompass the goal of philosophy. The division among the three areas of the philosophy seems to have originated with Epicurus[15] and is similar to that found among the Stoics: physics, logic (which includes epistemology as in the canon), and ethics.

The entire universe is either matter or the absence of matter, called void, space, emptiness, place, and similar words. The void is space when it is occupied by matter and is space when completely devoid of matter. All matter is composed of atoms, literally unbreakable things. These atoms come in a variety of sizes, shapes, and weights - the only inherent properties of atoms. When these atoms combine, they form compounds, which have additional properties, such as color, taste, and texture. There is a large variety of atoms, though a finite number of varieties.

Of these varieties, there are infinite numbers of atoms, which occupy an infinite space. They move uniformly down through the void until they strike another atom. Their inherent weight pulls them down through space. All atoms move at the same speed, regardless of size. Occasionally, and at random times, the atoms "swerve" a minimum distance, introducing random chance and eliminating determinacy.[16]

After Rise of Christianity