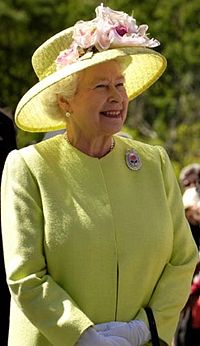 Elizabeth II (21st April[1] 1926 - 8th September 2022: [1]) was the Head of State and monarch of the United Kingdom, Canada, Australia and New Zealandand Supreme Governor of the Church of England from 1952 until her death in 2022. She was also Head of State of dozens of other Commonwealth countries for various parts of this time. 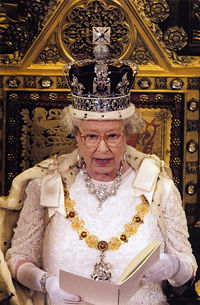 (CC) Photo: UK Parliament
The monarch visits Parliament annually in a ceremony to begin parliamentary proceedings. During this State Opening of Parliament, the Queen's Speech set out her government's intentions for the coming year.

She also served as titular Head of the Commonwealth. In none of these offices did she hold any real political power: as Head of State, the monarch's role is largely ceremonial as in all constitutional monarchies. Nevertheless, doubts remain in some quarters about specific residual discretions and crown prerogatives, such as choosing a prime minister, that are not always constrained by precedent or constitutional limitations.

The future Queen married Philip Mountbatten, whom the King had immediately before created Duke of Edinburgh, in 1947. Elizabeth ascended to the throne in 1952 while she was in Kenya,[2] upon the death of George VI, her father. Charles, Prince of Wales, the eldest of the Queen's four children, succeeded her. Elizabeth's hobbies included watching horse racing and breeding thoroughbreds, dog walking and country dancing.[3]

The Queen was the second-longest-reigning sovereign in recorded history, behind only Louis XIV, and just ahead of the late King Rama IX of Thailand (the only other sovereign known to have reigned 70 years was Prince John II of Liechtenstein). (Only monarchs of officially independent states count in this statement, and only those whose reign length, not just existence, is reliably recorded.)

She had a record 15 different Prime ministers in the UK alone, around 200 in all her realms put together. 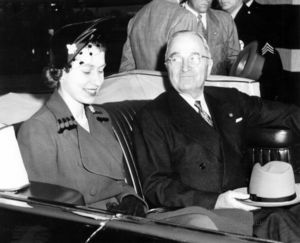 Elizabeth, then a princess, with U.S. President Harry S. Truman.

Her Royal Highness Princess Elizabeth of York was the firstborn child of the Duke and Duchess of York. Her baptismal name was Elizabeth Alexandra Mary and her pet name was Lilibet. Her only sibling was a younger sister, the late Princess Margaret Rose. Because her father was the second son of the reigning monarch, he was not expected to succeed to the throne and so no one envisioned Princess Elizabeth as the future queen.

Princesses Elizabeth and Margaret Rose [4] are thought to have had a happy childhood. They were educated at home by a governess, Marion Crawford, and were close to their parents.

In 1936, following the abdication of Edward VIII, later the Duke of Windsor, Elizabeth’s father the Duke of York became King George VI. The princess was now HRH The Princess Elizabeth and heiress presumptive to the throne. [5]

Accession to the throne

The Queen's accession actually took place in Kenya, where she happened to be visiting when her father died on 6 February 1952. A coded message was telegraphed through, and her private secretary asked her husband to break the news. The secretary then asked her what name she wished to reign under. The remaining legal formalities were carried out in London, partly immediately and partly when the Queen returned. She was crowned the following year as Queen of the United Kingdom, Canada, Australia, New Zealand, South Africa, Pakistan and Ceylon. 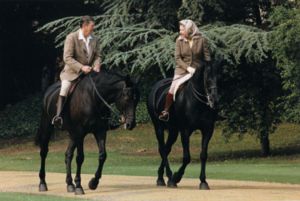 The Queen was known to be a practising Christian, regularly attending Anglican church services (or Presbyterian ones when in Scotland), in addition to her titular role as Supreme Governor of the Church.