From Citizendium
(Redirected from Charles, Prince of Wales)
Jump to navigation Jump to search 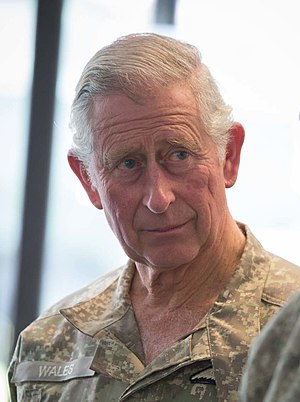 King Charles III (Charles Philip Arthur George; born 14 November 1948) is the King of the United Kingdom and various other countries where the UK monarch is head of state. He was the eldest son of Elizabeth II and Prince Philip, Duke of Edinburgh, and held the heir apparent's title Prince of Wales from 1958 until 2022.

Charles has been married to Queen Consort[1] Camilla since April 2005. His previous marriage to Diana, Princess of Wales ended with divorce in August 1996. From his first marriage he has two sons, Prince William and Prince Harry.

Charles has extensively involved himself in charity work, heading 'The Prince's Charities', a group of 19 not-for-profit organisations which raise an estimated £119 million pounds annually.[2]