Group of mills under the Agency of Currimbhoy Ebrahim & Sons Ltd., taken by an unknown photographer circa 1917[1].

The Ebrahim Baronetcy of Pabaney Villa was created in the Baronetage of Great Britain and Ireland on the 20th of July 1910, ante-dated to July the 1st, 1910 for Sir Currimbhoy Ebrahim[2]. King George V issued Letters Patent conferring the "dignity, state and degree" of a Baronet on Sir Currimbhoy Ebrahim of Bombay and to "the heirs male of his body lawfully begotten and to be begotten"[3].

In order to provide for the upkeep and dignity of the Baronetey, the then Governor General of India in Council enacted the Sir Currimbhoy Ebrahim Baronetcy Act, 1913. By this, considerable properties belonging to Sir Currimbhoy Ebrahim were settled upon the trustee to support the dignity of the hereditary title for the first baronet and his heirs, following the precedent set by the Cowasji Jehangir Baronetcy Act of 1911[4]. The first trustees included the first baronet and three officials of the Government of Bombay[3].

The Ebrahim baronetcy remains the only British hereditary title created for a Muslim (other Muslims with hereditary titles such as Baron Headley have been converts, and whilst numerous Muslims have had honours such as Knighthoods and Life Peerages conferred, these are for the lifetime of the holder only). 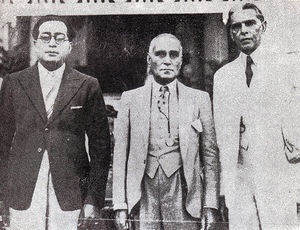 Currimbhoy Ebrahim, an Indian Muslim, was born an Ismaili Dawoodi Bohra[8] on the 21st of October, 1840[9] and was the founder of the Ebrahim fortune[10]. He inherited a business resting upon the trade between Bombay and Zanzibar on the east coast of Africa[10]. He first extended the family business to the export of opium and silks to the Far East (he went to Hong Kong in 1856 and set up E. Pabaney & Co. in 1857 at age seventeen[8]), and then turned to the manufacture of textiles. In 1888 he purchased a group of defunct mills which he dubbed the Currimbhoy Mills[10]; ten years later he acquired the Mahomedbhoy Mills[10]; in 1900 he purchased the Crescent Mills[10], by which time the business controlled four mills in Bombay[11].

After becoming an industrialist with mercantile business in Bombay and Calcutta (India), Hongkong and Shanghai (China) and at Kobe (Japan)[1], Currimbhoy Ebrahim was knighted after a donation of 300,000 rupees for a museum commemorating a visit by the Prince of Wales and a contribution towards a statue of the Prince in Bombay[12] (as a Muslim capitalist, he maintained close links with the colonial authorities[13]).

In 1905 he set up the Currimbhoy Bleaching and Dyeing Works[10], and finally, in 1915 he acquired the Pearl Mills[10]. Under Currimbhoy’s skilful management these mills yielded very high dividends, and conferred upon him the reputation of being one of the leading industrialists of Bombay[10].

Sir Currimbhoy Ebrahim was created a baronet on the 20th of July, 1910. Mohammed Ali Jinnah read an address of welcome on behalf of the citizens of Bombay for Sir Currimbhoy Ebrahim to mark the creation of the baronetcy[14]. The first baronet died on the 29th of May, 1924[3]. Clause 21 of his will stated: "Lastly it is my special desire that my son Mohamedbhoy on succeeding to the title of Baronet and every succeeding Baronet shall forthwith on such succession adopt the names of Currimbhoy Ebrahim and continue to do so as long as he holds the title."[3], thus making the holders commonly referred to as the Currimbhoy Ebrahim baronets, similar to the Readymoney and Jeejebhoy baronets.

Sir Currimbhoy Ebrahim was a freemason of a Bombay Lodge[15] and president of the Indian Merchants' Chamber in 1914[6]. He was also a director of a Bombay bank[16]. He had had three sons[17] (his heir Mahomedbhoy, Ismail and Fazalbhoy[10][3]) who shared his reputation as an industrialist and were shared owners of the Currimbhoy enterprises[10].

Born on the 13th of April, 1903 and succeeded to the title on the 3rd of March, 1928. He controlled ten mills by 1930, spread across Bombay, Hyderabad, Central India and Ceylon[11]. He owned roughly fifteen percent of the Bombay cotton mill industry by 1933[18]. Control of the industries in Bombay was highly concentrated in the hand of fifty individuals of five leading families (which included the Currimbhoy Ebrahims) who owned half the spindles and looms of Bombay's cotton mills[13]. He was one of the many Indian Muslim leaders attending the First Provincial Muslim League Conference (presided over by Jinnah) in October 1938[19]. The third baronet migrated to Pakistan some time between 1947 and September, 1949 and was declared an evacuee under the new Bombay Evacuees Act in the same year, resulting, despite appeals, in the baronetcy trust being dissolved by the Indian Government[3]. He died on the 4th of March, 1952, aged 48[9]. Apart from his heir, his wife, Lady Amine Currimbhoy Ebrahim, and two daughters (Munira Fazal Chinoy and Mumtaz Mohamed Rahimtoola) survived him[3].

Over the years, the Currimbhoy Ebrahim name has become synonymous with philanthropic donations for scholarships, institutes and universities, similar to the activities of the other Indian baronets. The activities were mainly connected with Mumbai: