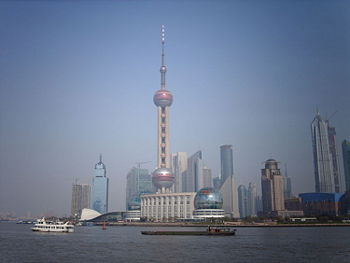 (CC) Photo: Derek Harkness
Pudong is Shanghai's new city. The skyline, featuring the tower of the Oriental Pearl is highly recognisable and is symbolic of China's modern development.

Shanghai has long been the international gateway for trade with China. Situated near the mouth of the Yangtze River, the longest navigation in China and the third largest river in the world, the city has a prosperous history. During the 18th century, Shanghai contained many foreign concessions and trading centers making the city vibrant and culturally diverse. Shanghai grew to become the largest city in China. A title that has only recently been lost to Chongqing. However, the cities success has also brought it misery. The Japanese occupation of China in the 1930's and early 1940's saw Shanghai become a focus of much fighting as the two countries jostled for control of this strategically and economically important city.

Shanghai is situated on the banks of the Huang Pu River, a tributary of the Yangtze. The old city is to the north of the Huang Pu. The old riverside area, know as 'The Bund', contains many fine buildings form the colonial period of the late 18th Century and early 19th Century. One could easily mistake this area for a city in Europe. Opposite the Bund on the strip of land between the Huang Pu and the East China Sea, is the new city of Pudong. The creation, in 1990, of Pudong as a special economic development zone has brought a great deal of wealth to Shanghai.