A diaper, as it is known in North America, or nappy in the United Kingdom and many Commonwealth countries, is an absorbent garment worn between an individual's legs to contain excretions. It is worn by individuals, most often infants, who have no or little control over their bladder and bowel movements. A diaper is used to contain the mess and remain dry and comfortable after the wearer has wet or soiled themselves. After this diapers must be changed, usually by another individual such as a parent or caretaker.

Diapers can be made of both cloth and disposable materials. Cloth diapers consist of layers of fabric folded together that can be washed and reused, while disposable diapers contain absorbent chemicals and are disposed of after use. Disposable diapers are currently the most commonly used type of diaper.

Though diapers are primarily worn by children who have yet to be potty trained or suffer from bedwetting, adults who suffer from incontinence must wear the garment as well.

Diapers are often worn from a child's birth until the time that child has been potty trained. Replacing a soiled diaper with a fresh one is known as changing a diaper. Diaper changes must be performed to prevent contracting skin irritation of the buttocks, genitalia, and waist, known as diaper rash. Most children outgrow diapers around the ages of two to four, though some children are kept in diapers up to the age of five and sometimes even seven, which may even cause health risks according to some claims.[1][2] While most children are potty trained in the day time by two to four years of age, some children continue to wear diapers at night until eight years or older. These children suffer from enuresis, commonly known as bedwetting. Because of this many disposable diaper manufacturers have increased the size of their products to accommodate older children. The increase in older children wearing diapers has also motivated diaper companies to produce absorbent disposable underwear designed to be worn at night by children, such as Huggies GoodNites.

Although diapers are most commonly associated with being worn by babies and children, some adults must wear diapers for a variety of reasons. Individuals that suffer from medical conditions that cause them to have fecal or bladder incontinence may wear diapers. Those who are bedridden or physically handicapped and cannot independently reach a toilet may wear diapers as well. Adult diaper products are often advertised as "incontinence pads" to lessen the negative impact that wearing diapers has on an individual. 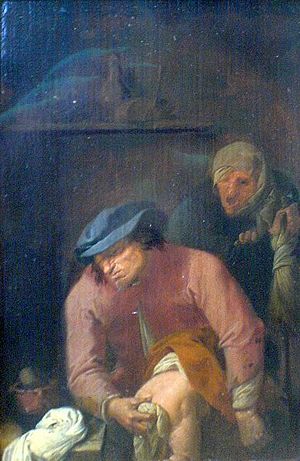 Unpleasant Fatherly Duties by Adriaen Brouwer, depicting the changing of a diaper.

The use of diapers on infants has dated as far back as the beginning of mankind. Milkweed leaf wraps, animal skins, and many other natural resources were used to get the job done. Roman, Egyptian, and Aztec accounts of their day-to-day lives also mentioned the garment. In European cultures, infants began wearing the predecessor to the modern diaper sometime in the late 1800s. Infants were diapered using cloth material folded together and held in place by safety pins. The cloth diaper was soon introduced for mass production in the United States.

The modern disposable diaper was the product of the inventions of several different individuals. Marion Donovan, a Newport housewife, invented a water-proof diaper cover using a sheet of plastic from a shower curtain, which she received a patent for in 1951. [3] In 1947 George M. Schroder invented the first ever disposable diaper with disposable non-woven fabric. [4] The 1950s brought about the production of diapers by more companies such as Playtex, Parke-Davis, and Kendall. Even after this, disposable diapers were a luxury rather than a necessity. That changed when the one of the most revolutionary products in disposable diaper history was produced by the company Procter & Gamble, called "Pampers", first test-marketed in 1961. Pampers were a creation of inventor Vic Mill. [5]

Pampers launched a new "wing-fold" design in 1966 and became a national brand in the United States. The next few decades proved to be a major boom in the disposable diaper industry, further increasing their popularity and ease of use, with competitor Kimberly-Clark's "Huggies" introduced in 1977. [6] Many consumers complained about the unnatural shape of most baby diapers that frequently leaked. Most companies shied away from making a new design, the exception when Pampers released Luvs diapers in 1976 which featured an hourglass shape, reducing bulk at the crotch area.

The diaper wars continued by the invention of new performance features, such as superabsorbant fillers. Scientists improved the absorbency of diapers with polymers called sodium polyacrylate. In 1988 Huggies replaced Pampers as the leading national brand and solidified its position with the release of Huggie's Pull-Ups Training Pants, a combination of diaper technology and cloth underwear designed for toddler toilet training. Pampers and Huggies have continued to be the leading manufacturers of disposable diapers until today.

The decision: cloth or disposable?

Studies from the 1990s show that 95 percent of parents in the U.S. choose disposables, but there is ongoing controversy about which are better to use, from the point of view of cost, convenience, morality and policy. Even parents who do not particularly care about the controversy will still need to make a decision about which to use.

It is well-known that using cloth diapers and washing them in one's own washing machine will save on the order of hundreds of dollars, on average, over the entire infancy and toddlerhood period. But washing cloth diapers is a tremendous amount of work, and families with small children are already typically overworked. Those who for whatever reasons prefer to use cloth diapers can use a diaper laundering service, but using such a service raises the price of cloth to something comparable to the price of disposable.

Another important consideration is the fact that modern disposable diapers do an excellent job of wicking urine away from the skin, which not only makes a baby more comfortable, but also reduces the frequency and severity of diaper rash. Cloth diapers have improved in their construction as well, but they still press urine-soaked cloth against a baby's skin. Still, some parents still use cloth diapers and, by changing immediately and using diaper rash ointment such as Desitin, largely avoid diaper rash. Moreover, cloth diapers have a reputation for leaking more than modern disposable diapers, because cloth diapers generally do not have elastic around the legs. But this is a matter of debate among partisans.

Not everyone agrees with that, however. The side of disposables argues that the water and energy required to wash cloth diapers cancels out the disposable's environmental effects. Some studies show that reuseable diapers cause more damage to the environment than disposable ones. Cloth diapers are also most often made of cotton, which is said to be environmentally wasteful crop. Says one particular article: "Conventional cotton is one of the most chemically-dependent crops, sucking up 10% of all agricultural chemicals and 25% of insecticides on 3% of our arable land; that's more than any other crop per unit." [8] According to the study the water and energy used in washing diapers does take its toll as well, concluding, "The most significant environmental impacts for all three nappy systems were on resource depletion, acidification and global warming. For one child, over two-and-a-half years, these impacts are roughly comparable with driving a car between 1,300 and 2,200 miles." [9]

The latter study, done by the Environment Agency, actually found no green winner in the debate, saying that both types were equal in their environmental impact.[10] In keeping with its neutrality policy, the Citizendium makes no particular recommendation.