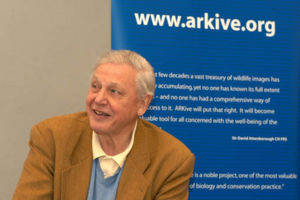 Sir David Attenborough (born 8th May 1926 in London, England) is an English naturalist and broadcaster. His professional and slightly eccentric style, combined with a modestly-conveyed authority on natural history, has long made him a favourite among British television viewers, and he remains highly respected by the scientific community; the biologist Richard Dawkins once called him "perhaps the most respected man in England".[1] He remains highly active in programme-making; his latest project on reptiles and amphibians, Life in Cold Blood, was broadcast in 2008.[2] Attenborough has also championed environmental causes and supported a campaign against creationism in British schools.[3]

For ten years up to 1963, the BBC broadcast Attenborough's first major TV series on nature, Zoo Quest, made in cooperation with London Zoo. The programmes narrated the search for new specimens for the zoo's collection.

Attenborough was once a high-ranking member of the BBC, offered the post of director-general, but he turned it down to concentrate on natural history. This marked the end of a distinguished career behind the scenes at the Corporation: Attenborough had become the second BBC2 controller in 1965 after Michael Peacock. Under his stewardship the channel commissioned two major series: Civilization, presented by the art historian Lord Clark, and later The Ascent of Man which looked at civilization scientifically. In 1969 he became BBC director of television.

The middle son of a family of five siblings, including two adopted daughters, Attenborough collected natural history specimens from his childhood. His older brother, Lord 'Dickie' Attenborough, is an actor and film director. His father, Frederick Levi Attenborough (1887–1973), taught and later took his BA in 1918 with a first in Medieval and Modern Languages at Emmanuel College, Cambridge. While a College Junior Fellow in 1922, Frederick published his research dissertation The Laws of the Earliest English Kings, which was reprinted in 2006. Frederick became Principal of Borough Road Training College, Isleworth (1924–1932) and of University College, Leicester (1932–1951) where Attenborough grew up on the campus.