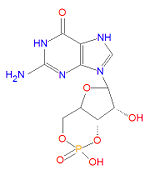 In biochemistry, cyclic GMP is a "guanine nucleotide containing one phosphate group which is esterified to the sugar moiety in both the 3'- and 5'-positions. It is a cellular regulatory agent and has been described as a second messenger. Its levels increase in response to a variety of hormones, including acetylcholine, insulin, and oxytocin and it has been found to activate specific protein kinases."[1]

In signal transduction, cell surface receptors may activate second messenger systems such as adenyl cyclase-cyclic AMP and cyclic GMP which then may activate protein kinases which then affect downstream targets (see figure).[2]