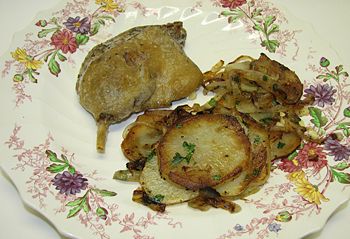 Confit of duck or, in French, confit de canard is cooked duck that is then preserved for long periods in solidified duck or goose fat. Originally a simple country dish that was generally associated with Southwestern France in the days before refrigeration, in the last three decades it has become a popular standard in French restaurants throughout the world. "Confit" is derived from confire, the French verb meaning here "to preserve by means of a gentle cooking in fat." Large pieces of duck, usually the thigh and its attached drumstick, are first salted and left to rest for a day or so. They are then immersed in large quantities of duck fat and cooked very slowly over low heat for several hours. After cooling, the pieces of cooked duck are then placed in containers and completely covered with cooled but still liquid duck fat. Confit can be eaten immediately after this initial cooking, but most authorities believe that it develops more flavor by being stored in the solidified fat in a cool area for at least six weeks or even longer. Just before eating, the confit is removed from its protective coating of fat and then warmed in such a way that its skin is rendered golden brown and crispy. Although goose, pork, and even lamb are also made into confit and sold in cans, for many years the most well-known kind of confit was that of goose. In the 1970s, however, with the development of the so-called nouvelle cuisine (new cooking), lightly cooked pieces of duck breast (magret de canard) became a prominent feature on many restaurant menus. With a large surplus of duck thighs now on hand, confit of duck was soon promoted as means of using the thighs and it is now more widely available than confit of goose.

For images showing the preparation of confit of duck please see our gallery.