Combat loading is a method of loading cargo into the ships that will carry it to the site of an amphibious landing. It gives primary consideration to the ease and sequence with which troops, equipment, and supplies can be unloaded ready for combat, rather than to the efficient use of cargo space. The latter method is called administrative loading. 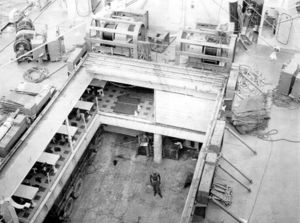 The art and science of combat loading were developed in World War II, and contributed greatly to the success of Allied amphibious campaigns. Attack cargo ships were assigned a specially-trained Marine Corps officer called the "Transport Quartermaster" or "Combat Cargo Officer" to oversee their proper combat loading. A basic Marine document describes the major issues and terminology. [1]

Now that the doctrine is accepted, there is U.S.-joint doctrine for it. [2] This sets broad policy, such as making the distinction between initial supply and sustainment. For example, the "quick reaction" Marine Expeditionary Units (MEU) carry 15 days' supplies, which they can land under combat conditions, using helicopters and tilt-rotor aircraft, air-cushion vehicles, and conventional landing craft. They have the capability to keep the ships "over the horizon" from a combat area. [3]

In contrast, prepositioning ships do have some helicopters and landing craft, it is assumed that they will be carrying sustainment supplies, which can be taken ashore by barges or at pierside.

Successful combat loading several things. On any given ship, the supplies that are expected to be needed first must be loaded last, so they can be unloaded first at arrival.

Given that specific circumstances may alter the assumptions of the things that will be needed first, a detailed inventory needs to be kept, with computer support helping to define the most efficient way to retrieve out-of-sequence items. Such techniques, of course, were not available in the Second World War.

When multiple ships carry supplies, no individual ship should carry all of one resource; the most critical items, such as communications equipment and ammunition, often should be distributed among all ships of the force. These principles often apply to personnel; all commanders of a given unit should not be on the same ship or aircraft.

While many militaries may be accused of planning to fight the last war, many learn from especially horrible examples of what not to do. The attempted Bay of Pigs invasion of Cuba, in 1962, remains the classic example of why critical items need to be distributed among multiple transports. While there were five amphibious ships, the [4] All long-range communications equipment had been on the second ship sunk; both tactical control and the ability to talk to U.S. forces was lost.

After the Second World War, alternative to delaying an operation while transports are being loaded developed is the use of prepositioning ships. The idea came from the U.S. Marine Corps, and applies to operations only when a secure unloading area, either in a port or an appropriate beach, is available.

Prepositioning ships are not appropriate to be part of an opposed amphibious landing. The prepositionships are docked at secure forward bases such as Diego Garcia and Guam. Their readiness is the responsibility of the [[United States Transportation Command, although their control may be delegated to the combatant commander of a specific operation.

Originally, squadrons of four cargo ships, carrying the equipment and supplies for 30 days' typical of a Marine Expeditionary Brigade. The Marines of the Brigade would fly to a staging area near the ships, and "marry up" the personnel with the preloaded equipment. Following the principles of force-wide positioning, no one prepositioning ship carries all of a critical type of equipment.

As experience developed, the Army and Air Force began adding ships to the prepositioning squadrons, carrying supplies and equipment likely to be needed in a joint service operation. In particular, the Air Force prepositioned bombs and other bulky air-delivered ordnance.

There are three basic methods of arranging items in a cargo hold:

Combat loading normally requires the use of each of these methods, with the vertical and block method predominating.

Combat loading is not only a matter of where packages are stored, but also that they are properly packaged for movement in landing craft (and vertical takeoff aircraft when used) and onto a temporary storage area. Equipment and supplies that will be damaged by getting wet are useless, even if arranged in a logical order.

Especially with modern forces with computerized inventory, machine-readable labels, and power handling equipment, the loading should be adaptable to changes in tactical conditions. If, for example, earth-moving equipment is not scheduled to land until the second day, but the first wave encounters swampy land that needs to be bridged, the engineer equipment has to be retrieved out of order.

The Gallipoli Campaign of the First World War was a study in errors, but administrative loading slowed the support of ground troops.

One of the most catastrophic examples of failure of cross-loading and making individual ships critical was at the Bay of Pigs, where one ship had all the communications equipment and another had most of the ammunition -- and were sunk by air attack.

Royal Marine and Navy forces were intensely aware of combat loading requirements, and, when it was not initially practical because ships had been chartered, went through complex cross-decking in the bad weather of the South Atlantic. Even so, they did not follow ideal procedures, in that several assault landing ships, not fully unloaded, were not withdrawn from the immediate landing area where they were vulnerable to air attack.