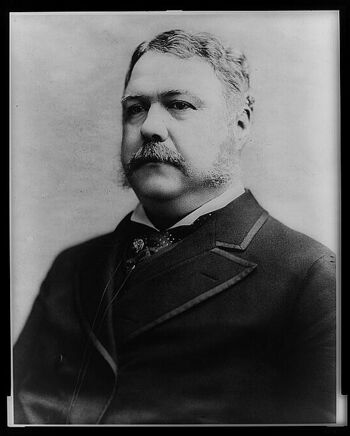 Chester Alan Arthur was the 21st president of the United States.

Arthur was born on October 5, 1829 in Fairfield, Vermont to a Baptist preacher who had emigrated from the north of Ireland. He graduated from Union College in 1848, taught school, was admitted to the bar, and practiced law in New York City. Early in the Civil War he served as Quartermaster General of the State of New York.

In 1871, President Ulysses S. Grant appointed him Collector of the Port of New York. Arthur effectively marshalled the thousand Customs House employees under his supervision on behalf of Roscoe Conkling's Stalwart Republican machine. Honorable in his personal life and his public career, Arthur nevertheless was a firm believer in the spoils system when it came under vehement attack from reformers. He insisted upon honest administration of the Customs House, but staffed it with more employees than it needed, retaining them for their merit as party workers rather than as government officials.

In 1878 President Rutherford B. Hayes, attempting to reform the Customs House, ousted Arthur. Conkling and his followers tried unsuccessfully to win redress by fighting for Grant's renomination at the 1880 Republican Convention. They reluctantly accepted the nomination of Arthur for the vice presidency.

During his brief tenure as vice president, Arthur stood firmly beside Conkling in his patronage struggle against President James Garfield. But when Arthur succeeded to the presidency, he was eager to prove himself above machine politics.

Avoiding old political friends, he became a man of fashion in his garb and associates, and often was seen with the elite of Washington, New York, and Newport. To the indignation of the Stalwart Republicans, the onetime Collector of the Port of New York became, as president, a champion of civil service reform. Public pressure, heightened by Garfield's assassination, forced an unwieldy Congress to heed the President.

In 1883, Congress passed the Pendleton Act, which established a bipartisan Civil Service Commission, forbade levying political assessments against officeholders, and provided for a "classified system" that made certain Government positions obtainable only through competitive written examinations. The system protected employees against removal for political reasons.

Acting independently of party dogma, Arthur also tried to lower tariff rates so that the government would not be embarrassed by annual surpluses of revenue. Congress raised about as many rates as it trimmed, but Arthur signed the Tariff Act of 1883. Aggrieved Westerners and Southerners looked to the Democratic Party for redress, and the tariff began to emerge as a major political issue between the two parties.

Arthur demonstrated as president that he was above faction within the Republican Party, if indeed not above the party itself. Perhaps in part his reason was the well-kept secret he had known since a year after he succeeded to the Presidency, that he was suffering from a fatal kidney disease. He kept himself in the running for the presidential nomination in 1884 in order not to appear that he feared defeat, but was not renominated and died on November 18,1886 in New York City. Publisher Alexander K. McClure recalled, "No man ever entered the Presidency so profoundly and widely distrusted, and no one ever retired ... more generally respected."

Editor's note: Due to newly found sources on the issue this paragraph should be substantially rewritten soon.

During Chester Arthur's Vice-Presidential campaign alongside James A. Garfield, Arthur P. Hinman, an attorney who had apparently been hired by the members of the Democratic party, explored the "rumors that Arthur had been born in a foreign country, was not a natural-born citizen of the United States, and was thus, by the Constitution, ineligible for the vice-presidency."[1] When Hinman's initial claim of a birth in Ireland failed to gain traction, he maintained instead that Arthur was born in Canada and lobbied the press for support while searching for Arthur's birth records, eventually in vain. After Arthur had become President due to Garfield's assassination, Hinman published a pamphlet aimed to cast doubt on Arthur's presidential eligibility.[2] 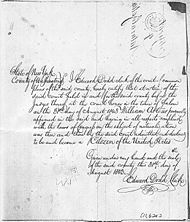 William Arthur's certificate of naturalization
However, due to the focus on Hinman's unfounded allegations regarding Chester Arthur's foreign place of birth,[3] it remained unknown during the Garfield campaign that Arthur was nevertheless a natural-born subject of the British crown,[4] because his British-Irish father William Arthur had not naturalized as a U.S. citizen until August 1843, fourteen years after Chester Arthur's birth,[5] and was at best a denizen of the State of Vermont.[6]

Neither the law nor any federal court ruling in the United States has ever determined whether a natural-born British subject like Chester Arthur can at the same time also be a natural born citizen of the United States,[7] which is one of the constitutional requirements for the offices of President and Vice-President.[8] It is equally unclear whether Arthur was even a U.S. citizen at birth, because until the Civil Rights Act of 1866 there had been no federal citizenship rule for U.S. territory. He may have been born a subject of Vermont with British citizenship under the common law of the state,[9] but the Fourteenth Amendment, which introduced ius soli into the United States Constitution, was ratified and adopted not until forty years after Arthur's birth. Even if applied retroactively, the 14th Amendment only covers born and naturalized citizens under complete U.S. jurisdiction,[10] whereas Arthur's status at birth was governed by British common law.

In 1882 Chester Arthur nominated Horace Gray as U.S. Supreme Court Justice, whose seminal decision in United States v. Wong Kim Ark extended the right of 14th Amendment citizenship to children born on U.S. territory of foreign parents, who have permanent residence and domicile in the United States.[11] If Arthur, by appointing Gray, ever intended to sanitize his problematic status with regard to natural born citizenship, he failed posthumously, because the court only ruled that Wong Kim Ark was a citizen, while Gray in fact indicated that Wong Kim Ark was not natural born.[12]

Arthur himself continuously gave false information on his family's history, thereby obscuring the circumstances and chronology of his own birth. Arthur knew of Hinman and his allegations and defended himself against the original claim that he was not a native-born citizen[13] by stating that his father "came to this country when he was eighteen years of age, and resided here several years before he was married",[14] whereas in reality his father William emigrated from Ireland to Canada at the age of 22 or 23. Arthur further claimed that "his mother was a New Englander who had never left her native country—a statement every member of the Arthur family knew was untrue."[15] In a second interview he repeated some of the historical revisions and further stated that his father had been forty years of age at the time of his birth,[16] which was revealed by Hinman to be a lie.[17] Somewhere between 1870 and 1880 Chester Arthur had caused additional confusion by creating 1830 as a false year of his birth,[18] which was quoted in several publications[19] and was also engraved on his tombstone. Shortly before his death Arthur caused several Presidential materials, which had been in his private possession, to be destroyed,[20] while other historical documents pertaining to Arthur's life and presidency were lost for unknown reasons.[21]

Parts of this article were sourced originally from Biography of Chester Arthur, White House, accessed January 6, 2008.