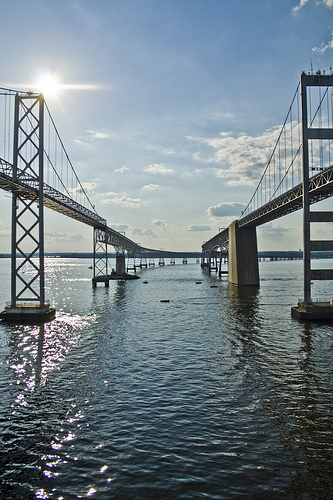 The Chesapeake Bay is an important geographic feature in Maryland and Virginia. The Bay watershed drains 64,000 square miles of land. Approximately 200 miles long and between 4 to 30 miles wide, the Chesapeake Bay is one of the major estuaries of the eastern seaboard of the United States. [1] According to Blair Rudes, a linguist who has studied the Algonquin language, chesapeake means Great Water or perhaps refers to an Algonquin village at the mouth of the bay. Locally oral history supports a different meaning: "Great Shellfish Bay". [2] Countless rivers flow into the Chesapeake. The most famous and largest of these include the Potomac, the Susquehanna, the James and the Rappahannok.

Today, many researchers believe that they have found evidence of an asteroid or comet impact in what is now the mouth of the Chesapeake Bay. That would make this impact one of the most significant cosmic impacts to ever strike what is now the continental United States. Scientists believe that the impacting object generated immense tsunami waves more than 2000 feet high and at the same time kicked up a terrible cloud of dust and debris.[3]

The bay, its rivers and wetlands are part of a complex system which provides sanctuary for complex and intertwined groups of species. Many types of fish begin their life here or migrate through these waters. Shellfish such as crabs, clams and oysters are abundant. Grasses, plankton and other plant life help support the web of life found here. [4]

It is claimed that the Bay's oyster population has declined dramatically since the late 1970s. This decline was blamed on nutrient pollution and loss of oyster reef habitat, but a large part of the decline is probably the result of over-harvesting and disease. Since that time, strict harvesting strictions were imposed. Pollution awareness campaings have attempted to reduce the impact of people living in the Bay watershed. The oyster population seems to be recovering slowly. [5]

Because the Bay is so important to fishing industries and transportation, there are many efforts to regulate and improve the waters of the Chesapeake. The Bay has an average depth of about 21 feet but most of the Bay is shallow. Shipping lanes make use of the deep channels in the bay and many of these are over 100 feet deep. [6] The ports of Baltimore and Norfolk are just two of many important or historical ports found on the Bay.

The Chesapeake Bridge-Tunnel provides the only direct link between Virginia's Eastern Shore and Hampton Roads south. The Bridge-Tunnel traverses waters 25 to 100 foot deep bridging a distance of 17.6 miles from shore to shore over 23 miles of bridge, road and tunnels. Its two tunnels are intended to provide access to the Bay for ocean going vessels too large to pass under the bridge.[7]

Captain John Smith the English settler discovered the Chesapeake Bay while making his way to Jamestown.