From Citizendium
< Caterpillar Club
Jump to navigation Jump to search 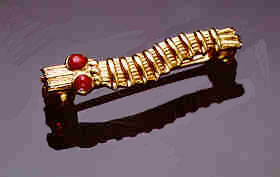 The Irvin pin. The eyes have always been red, but there are urban legends about the meanings of other colors. 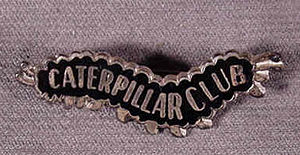 A pin from another company, possibly Switlik or Standard Parachute. This style is common in catalogs and auctions of military memorabilia.

The Caterpillar Club is an informal association of people who have successfully used a parachute to bail out of a disabled aircraft. After authentication by the parachute maker, applicants receive a membership certificate and a distinctive lapel pin.

Before April 28, 1919 there was no way for a pilot to jump out of a plane and then to deploy a parachute. Parachutes were stored in a canister attached to the aircraft, and if the plane was spinning, the parachute could not deploy. Film industry stuntman Leslie Irvin developed a parachute that the pilot could deploy at will from a back pack using a ripcord. He joined the Army Air Corps parachute research team, and in April 1919 he successfully tested his design, though he broke his ankle during the test. Irvin was the first person to make a premeditated free fall jump from an airplane. He went on to form the Irving Airchute Company, which became a large supplier of parachutes. (A clerical error resulted in the addition of the "g" to Irvin and this was left in place until 1970, when the company was unified under the title Irvin Industries Incorporated.) The Irvin brand is now a part of Airborne Systems, a company with operations in Canada, the U.S. and the U.K.[1].

An early brochure [2] of the Irvin Parachute Company credits William O'Connor 24 August 1920 at McCook Field near Dayton, Ohio as the first person to be saved by an Irvin parachute, but this feat was unrecognised. On 20 October 1922 Lieutenant Harold R. Harris, chief of the McCook Field Flying Station, jumped from a disabled Loening W-2A monoplane fighter. Shortly after, two reporters from the Dayton Herald, realising that there would be more jumps in future, suggested that a club should be formed. 'Caterpillar Club' was suggested because the parachute canopy was made of silk, and because caterpillars have to climb out of their cocoons and fly away. Harris became the first member, and from that time forward any person who jumped from a disabled aircraft with a parachute became a member of the Caterpillar Club. Other famous members include General James Doolittle, Charles Lindbergh and (retired) astronaut John Glenn.

In 1922 Leslie Irvin agreed to give a gold pin to every person whose life was saved by one of his parachutes. By 1945 the number of members with the Irvin pins had grown to over 34,000. In addition to the Irvin Air Chute Company and its successors, other parachute manufacturers have also issued caterpillar pins for successful jumps. Irvin/Irving's successor, Airborne Systems Canada, still provides pins to people who made their jump long ago and are just now applying for membership. Another of these is Switlik Parachute Company, which though it no longer makes parachutes, still issues pins.

The club has no meetings, officers, or formal organization, but the requirements for membership are rigid – members must have saved their lives by jumping from a plane with a parachute. In the early 21st century, only about ten people qualify each year, including military pilots who eject from their planes.

RAF Sgt. Nicholas Alkemade, who during World War II baled out of a RAF Avro Lancaster without a parachute and landed uninjured in a snow-drift, was refused membership because a parachute had not been used. More recently, a group of twelve skydivers were denied membership when one of them fouled the plane's tail and caused it to fall from the sky. He died in the crash, but the other eleven parachuted to safety. They did not qualify because they boarded the plane with the intention of parachuting from it. The pilot, however, was admitted to the club.