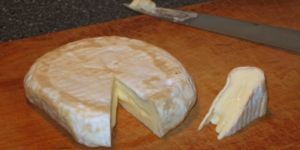 Camembert is an iconic French cheese made from cow's milk; it is, along with brie and roquefort, probably the most famous of the hundreds of cheeses made in France.[1] Soft and moderately flavored, with a downy rind,[2] the purest camemberts are made in the Normandy region[3] of France from raw, unskimmed, and unpasteurized milk. It falls into the general category of fromages à croûte fleurie, or white mold cheese. Although camembert is now produced all over France, only those cheeses that meet rigid government standards are allowed to be sold with the coveted A.O.C. (Appellation d'Origine Contrôlée) certification on them. Although similar cheeses had probably been made in the region for centuries earlier, it was only around 1790 that a local farmer's wife, Marie Harel, supposedly perfected the technique by which they are still made. [4] A statue in her honor has been erected in the small village of Camembert, financed, ironically, by an American admirer of the cheese.

The process of making camembert is similar to that employed for the larger and somewhat milder brie, but the micro-organisms of the two cheeses are different. "Like Brie", says the 1961 edition of the Larousse Gastronomique, "its crust must be a yellowish-orange without any black streaks. The cheese must be pale yellow, smooth and without holes. It must not be runny." [5] Today, however, with more standardized procedures in place and a better understanding of the mold process, a perfect camembert is now expected to have a mostly white rind. One authoritative cheese book says that, "The shape should be intact, and the rind covered in white mold, with reddish stripes and stains. The pâte should be creamy yellow, supple and give slightly to finger pressure. There should be a light smell of mold and the taste may be too salty at times. The locals prefer Camembert moitié affiné — half and half — when the filet or heart is still white and not yet creamy."[6] A perfect camembert is generally aged from two to three weeks by its maker, sold, then further aged by a fromager-affineur, a cheese specialist who has his own cellars with low temperatures and controlled levels of high humidity, for another few weeks in order to fully develop its own distinct characteristics. [7]

To obtain the A.O.C. certification, camemberts must be of a standard size (about nine and a half ounces) and must be made of raw, unfiltered, unheated milk that yields a finished cheese with a fat content of at least 38 percent. [8] The milk must come from cows in Normandy that have been fed under certain conditions [9] and must be ladled in four separate layers into round molds that are between 10 and 11 centimeters in depth.[10]

Total production of camembert in France in 2006 was 112,000 tons, most of it mass produced from pasteurized milk; only 12,000 tons made in the traditional process in Normandy were accorded the A.O.C. Today, the two largest producers of manufactured camembert, Lactalis and Isigny Sainte-Mère, are petitioning the National Institute for Origin and Quality to accord their cheeses A.O.C status in spite of their being produced with new techniques of "thermizing" and "microfiltration."