A Bode plot, named after Hendrik Wade Bode, is a combination of a Bode magnitude plot and Bode phase plot, that shows the transfer function or frequency response of a linear, time-invariant system using a log-frequency axis (frequency in powers of 10).

A Bode magnitude plot (also referred to as the Bode gain plot) is a graph of log magnitude versus frequency. The magnitude axis of the Bode plot is usually expressed as decibels, that is, 20 times the common logarithm (20 log10) of the amplitude of the gain.

A Bode phase plot is a graph of phase versus frequency, also plotted on a log-frequency axis, to evaluate how much a signal will be phase-shifted. Generally, the phase shift φ is a function of frequency.

The two Bode plots can be seen as separate plots of the real and the imaginary parts of the complex logarithm of a complex gain, say A(φ) = |A|ejφ. The Bode plot of a gain that is the product of two gains, A = A1A2 is thus:

If the transfer function is a rational function with real poles and zeros, then the Bode plot can be approximated with straight lines. These asymptotic approximations sometimes are called straight-line Bode plots, and sometimes simply Bode plots. They are obtained by breaking up the factors of a gain expression into simple products of pole and zero factors, and then replacing the accurate gain expressions for each factor using only asymptotic forms valid at very low and very high frequencies. These straight-line approximations to the Bode plots are included in the figures below.

As an aside, system modifications seldom change the magnitude and phase Bode plots independently — changing the amplitude response of the system will most likely change the phase characteristics and vice versa. Their interdependence is illustrated by the observation that the phase and amplitude characteristics can be obtained from each other for minimum-phase systems using the Hilbert transform.

To illustrate the method, a lowpass filter and a highpass filter example are presented, and then superposition, or summing of plots is illustrated using a product of a pole with a zero. 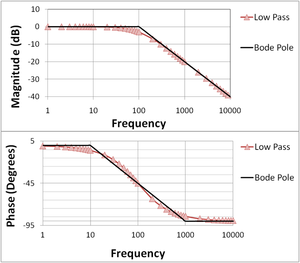 (PD) Image: John R. Brews
The Bode plot for a first-order (one-pole) lowpass filter; the straight-line approximations are labeled "Bode pole"; phase is 90° lower than for the highpass filter because the phase contribution of the numerator is 0° at all frequencies.

In the next figure, the Bode plots are shown for the one-pole lowpass filter function:

Using the rules for complex numbers, the magnitude of this gain expression is plotted on the Bode gain plot:

and ranges from A=1 at low frequencies to A=f1/f at high frequencies. On the Bode magnitude plot, decibels are used, and the plotted magnitude is:

The angle of the gain expression is plotted on the Bode phase plot:

and ranges from 0° at low frequencies to −tan−1(∞) = −90° at high frequencies. Care must be taken that the inverse tangent is set up to return degrees, not radians.

The straight-line approximation to the lowpass Bode gain plot is arranged by using a zero-slope line obtained by setting f=0 in the gain expression (or A=1), and extending this line from f=0 to the corner frequency where roll-off begins, namely f=f1. At this point the gain expression is approximated by its expression for high frequencies, that is for f>>f1 (or A=−jf1/f), which leads to a straight line on the dB plot with a slope of −20dB/decade of frequency on the log-frequency scale. 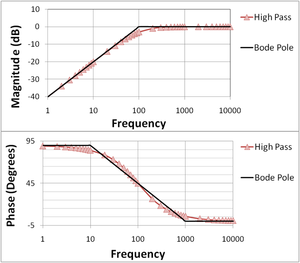 In the figure at right, the Bode magnitude and phase plots are shown for a one-pole highpass filter function:

The magnitude of this complex function is

and ranges from A=f/f1 at low frequencies to A=1 at high frequencies. On the Bode magnitude plot, decibels are used, and the plotted magnitude is:

The straight-line approximation to the highpass Bode gain plot is arranged by using a the low frequency approximation to the gain function (or A=jf/f1), a straight line on the dB plot with an upward slope of 20dB/decade of frequency, and extending this line from low frequencies to the corner frequency where roll-over begins, namely f=f1. At this point the gain expression is approximated by its expression for high frequencies , that is for f>>f1 (or A=1), which leads to a zero-slope line obtained by setting f=∞ in the gain expression.

Product of pole and zero

(PD) Image: John R. Brews
Bode magnitude plot for pole-zero combination; the location of the zero is ten times higher than in above figures; curves labeled "Bode" are the straight-line Bode plots

(PD) Image: John R. Brews
Bode phase plot for pole-zero combination; the location of the zero is ten times higher than in above figures; curves labeled "Bode" are the straight-line Bode plots.

The construction of Bode plots using superposition now is illustrated. To begin, the components are presented separately.

The Bode plot for a gain function that is the product of a pole and zero can be constructed by superposition, because the Bode plot is logarithmic, and the logarithm of a product of factors is sum of the individual, separate logarithms. The following two figures show how superposition (simple addition) of a pole and zero plot is done. The Bode straight line plots again are compared with the exact plots. The zero is assumed to reside at higher frequency (1kHz) than the pole (100Hz) to make a more interesting example.

Notice in the bottom phase plot that the range of frequencies where the phase changes in the straight line plot is limited to frequencies a factor of ten above and below the pole (zero) location. Where the phase of the pole and the zero both are present, the straight-line phase plot is horizontal because the 45°/decade drop of the pole is arrested by the overlapping 45°/decade rise of the zero. In the limited range of frequencies between 100 Hz and 1 kHz where both pole and zero are active contributors to the phase, the straight-line approximation is crude.

Examination of this relation shows the possibility of infinite gain if the product βAOL = −1. When βAOL = −1, a negative replica of the input is subtracted from the input by the negative feedback loop, which means we have a regenerative situation in which the input grows and grows. (That is, the magnitude of βAOL is unity and its phase is −180°, the so-called Barkhausen criteria for oscillation.[1][2]) Bode plots are used to determine just how close an amplifier comes to satisfying this condition.

If a simple yes or no on the stability issue is all that is needed, the amplifier is stable if f0dB < f180. This criterion is sufficient to predict stability only for amplifiers satisfying some restrictions on their pole and zero positions (minimum phase systems). Although these restrictions usually are met, if they are not another method must be used, such as the Nyquist plot.[3][4]

(PD) Image: John R. Brews
Phase of feedback amplifier °AFB in degrees and corresponding open-loop amplifier °AOL. The phase margin in this amplifier is nearly zero because the phase-flip occurs at almost the unity gain frequency f = f0dB where βAOL = 1.

Two examples illustrate gain behavior and terminology. For a three-pole amplifier, gain and phase plots for a borderline stable and a stable amplifier are compared. These considerations also affect the amplifier step response.

Because the feedback amplifier does not have only real poles and zeroes, the straight-line Bode plot approximation does not work for the case with feedback.

The first of two figures at the right compares the Bode plots for the gain without feedback (the open-loop gain) AOL with the gain with feedback AFB (the closed-loop gain). See negative feedback amplifier for more detail.

for the case of large loop gain βAOL. So, an equivalent way to find f0dB is to look where the low-frequency asymptote to the feedback (or closed-loop) gain intersects the open-loop gain. (Frequency f0dB is needed later to find the phase margin.)

Near the crossover of the two gains at f0dB, the Barkhausen criterion is almost satisfied in this example, and the feedback amplifier exhibits a massive peak in gain (it would be infinity if β AOL = −1). Beyond the unity gain frequency f0dB, the open-loop gain is sufficiently small that AFB ≈ AOL (examine the formula at the beginning of this section for the case of small AOL).

Comparing the labeled points in these two figures, it is seen that the unity gain frequency f0dB and the phase-flip frequency f180 are very nearly equal in this amplifier, f180 ≈ f0dB ≈ 3.332 kHz, which means the gain margin and phase margin are nearly zero. The amplifier is borderline stable.

The last two figures on the right illustrate the gain margin and phase margin for a different amount of feedback β. The feedback factor is chosen smaller than in previous borderline stable amplifier, moving the condition | β AOL | = 1 to the lower frequency of f0dB = 1 kHz.

The upper of the two figures shows the gain plot. The intersection of 1 / β and AOL occurs at f0dB = 1 kHz. Notice that the peak in the gain AFB near f0dB seen in the borderline stable amplifier is almost gone.[Note 3][5]

As an aside, it should be noted that stability is not the sole criterion for amplifier response, and in many applications a more stringent demand than stability is good step response. As a rule of thumb, good step response requires a phase margin of at least 45°, and often a margin of over 70° is advocated, particularly where component variation due to manufacturing tolerances is an issue.[6] See also the discussion of phase margin in the step response article.