From a practical standpoint, knowing how the system responds to a sudden input is important because large and fast input signals may have extreme effects on the component itself and on other portions of the overall system dependent on this component. In some cases, the overall system cannot act until the component's output settles down to some vicinity of its final state, delaying the overall system response. Formally, the step response of a dynamical system gives information about the stability of the system, and about its ability to reach one stationary state when starting from another. 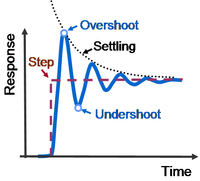 The step response of a system can be described by the following aspects of its time behavior:

In the case of linear dynamic systems, much can be inferred about the system from these characteristics. Below, the step response of a simple two-time-constant amplifier is presented, and some of these terms are illustrated. 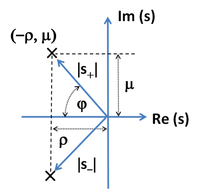 with zero-frequency gain A0 and angular frequency ω = 2πf. It is usual to describe the behavior of this function in the complex plane, using the complex variable s:

The time dependence of the amplifier is easy to discover by switching variables to s, whereupon the gain becomes:

The poles of this expression (that is, the zeros of the denominator) occur at:

Using polar coordinates with the magnitude of the radius to the roots given by |s| (See figure):

and the angular coordinate φ is given by:

Tables of Laplace transforms show that the time response of such a system is composed of combinations of the two functions:

which is to say, the solutions are damped oscillations in time. In particular, the unit step response of the system is:[1] 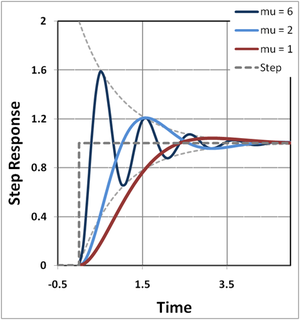 (PD) Image: John R. Brews
Step-response of a linear two-pole feedback amplifier; time is in units of 1/ρ, that is, in terms of the time constants of AOL; curves are plotted for three values of mu = μ, which is controlled by β.

The figure to the right shows the time response to a unit step input for three values of the parameter μ. It can be seen that the frequency of oscillation increases with μ, but the oscillations are contained between the two asymptotes set by the exponentials [ 1 - exp (−ρt) ] and [ 1 + exp (−ρt) ]. These asymptotes are determined by ρ and therefore by the time constants of the open-loop amplifier, independent of feedback.

The dependence of settling time upon μ is not obvious, and the approximation of a two-pole system probably is not accurate enough to make any real-world conclusions about feedback dependence of settling time. However, the asymptotes [ 1 - exp (−ρt) ] and [ 1 + exp (−ρt) ] clearly impact settling time, and they are controlled by the time constants of the open-loop amplifier, particularly the shorter of the two time constants. That suggests that a specification on settling time must be met by appropriate design of the open-loop amplifier.

The two major conclusions from this analysis are:

As an aside, it may be noted that real-world departures from this linear two-pole model occur due to two major complications: first, real amplifiers have more than two poles, as well as zeros; and second, real amplifiers are nonlinear, so their step response changes with signal amplitude. 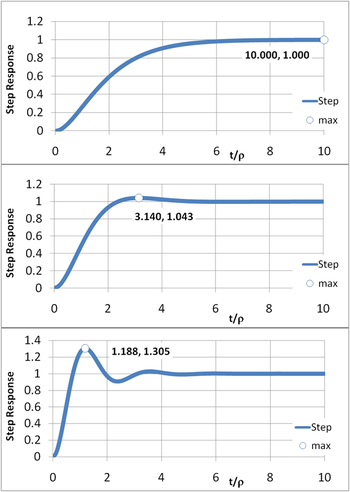 How overshoot may be controlled by appropriate parameter choices is discussed next.

Using the equations above, the amount of overshoot can be found by differentiating the step response and finding its maximum value. The result for maximum step response Smax is:[2]

The final value of the step response is 1, so the exponential is the actual overshoot itself. It is clear the overshoot is zero if μ = 0, which is the condition:

In words, the first time constant must be much larger than the second. To be more adventurous than a design allowing for no overshoot we can introduce a factor α in the above relation:

and let α be set by the amount of overshoot that is acceptable.

The figure at right illustrates the procedure. Comparing the top panel (α = 4) with the lower panel (α = 0.5) shows lower values for α increase the rate of response, but increase overshoot. The case α = 2 (center panel) is the maximally flat design that shows no peaking in the Bode gain vs. frequency plot. That design has the rule of thumb built-in safety margin to deal with non-ideal realities like multiple poles (or zeros), nonlinearity (signal amplitude dependence) and manufacturing variations, any of which can lead to too much overshoot. The adjustment of the pole separation (that is, setting α ) is the subject of frequency compensation, and one such method is pole splitting.

The amplitude of ringing in the step response is governed by the damping factor exp ( −ρ t ). That is, if we specify some acceptable step response deviation from final value, say Δ, that is:

this condition is satisfied regardless of the value of β AOL provided the time is longer than the settling time, say tS, given by:[Note 1]

where the approximation τ1 >> τ2 is applicable because of the overshoot control condition, which makes τ1 = α βAOL τ2. Often the settling time condition is referred to by saying the settling period is inversely proportional to the unity gain bandwidth, because 1/( 2π τ2 ) is close to this bandwidth for an amplifier with typical dominant pole compensation. However, this result is more precise than this rule of thumb. As an example of this formula, if Δ = 1/e4 = 1.8 %, the settling time condition is tS = 8 τ2. 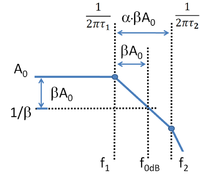 Next, the choice of pole ratio τ1 / τ2 is related to the phase margin of the feedback amplifier.[Note 3] The procedure outlined in the Bode plot article is followed. To the right is the Bode gain plot for the two-pole amplifier in the range of frequencies up to the second pole position. The assumption behind the plot is that the frequency f0dB lies between the lowest pole at f1 = 1 / ( 2π τ1 ) and the second pole at f2 = 1 / ( 2π τ2 ). As indicated in the figure, this condition is satisfied for values of α ≥ 1.

Using the figure the frequency (denoted by f0dB ) is found where the loop gain βA0 satisfies the unity gain or 0 dB condition , as defined by:

The slope of the downward leg of the gain plot is (20 dB/decade); for every factor of ten increase in frequency, the gain drops by the same factor:[Note 4]

The phase margin is the departure of the phase at f0dB from −180°. Thus, the margin is:

As an aside, for an amplifier with more than two poles, the diagram in the figure still may be made to fit the Bode plots by making f2 a fitting parameter, referred to as an "equivalent second pole" position.[6]