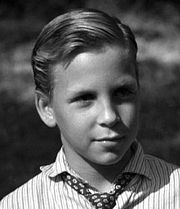 Billy Chapin (December 28, 1943 in Los Angeles, California) is an American former child actor, known for a considerable number of screen- and TV-performances from 1943 to 1959 and best remembered for both his roles as the “Diaper-manager” Christie Cooper in the 1953 family feature The Kid From Left Field, starring Dan Dailey, Anne Bancroft and Lloyd Bridges and little John Harper in Charles Laughton's 1955 Film Noir classic The Night of the Hunter, opposite acting legends Robert Mitchum and Lilian Gish.

He is the brother of also former child actors, Lauren Chapin, known as Kathy “Kitten” Anderson from the TV series Father Knows Best (1954-60) and Michael Chapin, likewise successful child performer of the 40s and 50s. He is also an uncle of professional singer Summer-Healey Chapin, his sister's daughter.[1]

Born William McClellan Chapin on December 28, 1943 in Los Angeles, California, he was the second of three children of Roy Chapin, a bank manager and Marquerite Alice Barringer, who later became a kind of personal coach for all of her children’s acting careers. [2]

Early Roles and the Broadway

He debuted on the screen at the age of only some weeks uncredited as the Baby Girl in Casanova Brown, 1944, starring Gary Cooper and had just five months later another uncredited baby-role in Marriage Is A Private Affair, starring Lana Turner. [3]

Only another tiny bit-role in The Cockeyed Miracle, 1946, followed before he started professional acting in 1951 in a supporting role in the Broadway stage musical Three Wishes For Jamie, while it passably successful toured the West Coast in the summer of the same year. When the play then moved to New York City in early 1952 after essential changes, concerning dramatization of the play and replacements within the original West Coast cast had been made,[4][5] it finally became a considerable success and earned Billy the N.Y. Drama Critics Award as the most promising young actor of the year.[6]

From The Kid From Left Field to A Man Called Peter 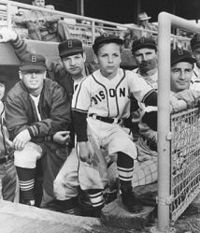 Billy Chapin as Christie Cooper in The Kid From Left Field, 1953.

This stage success then might have earned him his role as the grandson in the 1952 TV adaption of Paul Osborn's 1938 Broadway play, On Borrowed Time at the Calanese Theatre. But his first real screen goal he landed just one year later as the "Diaper Manager" Christie Cooper in the title role of the 1953 release The Kid From Left Field, starring Dan Dailey, Anne Bancroft and Lloyd Bridges. It was followed by three successive episodes of Jack Webb's Dragnet and two other television shows, before he portrayed Brian "Gadge" Robertson, the bright grandson of a fictive astro-scientist in the Science-Fiction B-flick Tobor The Great, 1954.

Only two smaller screen appearances then fell into line, - one in a Film Noir, entitled Naked Alibi, 1954, with Sterling Hayden and Gloria Grahame and another bit-role in the famous screen musical There's No Business Like Show Business, starring again Dan Dailey and along with Donald O'Connor and Marilyn Monroe, - before the boy gained his next memorable screen attentions as the young son of historic clergyman Peter Marshall in A Man Called Perter and Victor Mature's screen son in his second Film Noir: Violent Saturday, - both which were released in 1955. In between he continued appearing in standard television series such as Waterfront, The Millionaire, My Friend Flicka and various TV-theaters, -anthologies and -dramas.

The Night Of The Hunter

Billy Chapin and Robert Mitchum in "The Night Of The Hunter", 1955.

When Charles Laughton did cast Billy Chapin personally for the role of young John Harper in his only directorial work and Film Noir classic The Night of the Hunter, 1955, the boy was already considered an “acting technician” among the child performers of his time. After a private meeting with him in his Hollywood home, Laughton told Davis Grubb, the original author of the story:

"What I want is a flexible child, and the boy is exactly that." [7]

"(...) on the strength of his innate ability to understand the construction of a scene, its impact and its importance."[8][9]

Vintage sources, already, claim that Laughton would have had heavy personal problems, directing him and his little screen sister Sally Jane Bruce (Pearl Harper), but contemporary sources and re-discovered archive material on the production of The Night of the Hunter prove that, aside from a few generations-related tiffs, the old man and the boy got along wonderfully, even if, in accordance with these sources, Robert Mitchum (as the bogus preacher Harry Powell) in fact took over some directing tasks. [10]

Although meanwhile considered a classic of the Film Noir, The Night of the Hunter is still classified a critical and commercial failure, "because of its lack of the proper trappings", as reviews criticize the picture until now. [11] Nevertheless, in 1992, the United States Library of Congress selected the picture for preservation in their National Film Registry.

Tension At Table Rock and a fading career on TV

It's not known if that was the reason, why Chapin's final screen attention was just a year later young Jody Burrows in the 1956 B-Western Tension At Table Rock, starring Richard Egan, but from then on his career decreased solely to the television, where it eventually ended late in 1959 in a TV episode of the long-running family series Fury (1955-60).

In her own biography [12] his sister Lauren is mentioning him having had alcohol and drug problems in his twenties and thirties.