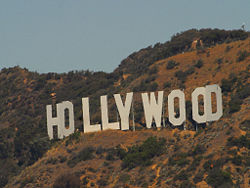 (PD) Photo: Jon Sullivan
The Hollywood sign is an iconic symbol of this geographic region.

Hollywood is a district of Los Angeles in the state of California in the United States, and has been the heart of the American film industry for over a hundred years.

It originally started as a small town called Cahuenga.[1] It was incorporated as the City of Hollywood in 1903.[2] In the 1900s movie makers from New York City moved there to escape the monopoly of Thomas Edison's movie company, and because of temperate weather more suitable for year-round location shooting. Since then it has boomed into the cinematic heart of the United States, and has been the home and workplace of actors, directors and singers that range from small and independent to world famous.