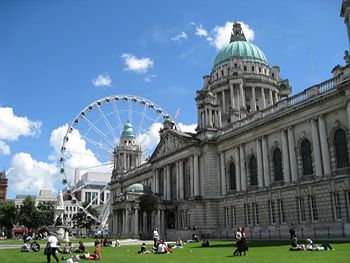 Belfast City Hall, July 2008, with The Belfast Wheel beside it.

Belfast (Ulster-Scots: Bilfawst or Bilfaust; Irish: Béal Feirste) is the capital of Northern Ireland in the United Kingdom, with a population of about 280,000. It is the largest city in Northern Ireland, the second largest on the island and the fifteenth largest in the United Kingdom. Although the city was built up around the River Lagan, the settlement was originally named after river which has now all but vanished - the River Farset (Feirste).

Despite being bombed less frequently than some other British cities, Belfast saw some of the heaviest bombing raids during World War II - the heaviest outside London. Cave Hill, just outside the city centre, was the location where the plans were drawn up by the United Irishmen for the Rebellion in 1798, and the caves there also served as refuge for many inhabitants from the bombing raids by the Luftwaffe. Belfast saw some of the worst violence during the period known as The Troubles from the late 1960s until the mid-1990s.

Although the town was eventually selected as the capital city when the Irish Free State seceded from the union, it hadn't always been the centre of the economy of Ulster. Both Londonderry and Carrickfergus had been larger in terms of population and economy until well after Belfast started to expand from the seventeenth century. While Belfast ironically thrived from the industry produced for the war effort after the Second World War, over half it's housing stock had been demolished due to the bombings. Having built up a decent economy based on various manufacturing industries, a change in global economy combined with the outbreak of The Troubles towards the end of the 1960s saw the city, as with the whole of Northern Ireland generally, go into an economic decline.

Much of Belfast was built up during nineteenth and early twentieth centuries, reflected in the cityscape by the wealth of Victorian and Edwardian buildings still surviving there. Since the reduction of The Troubles, much of Belfast has been revitalised and many new buildings and facilities have been built.