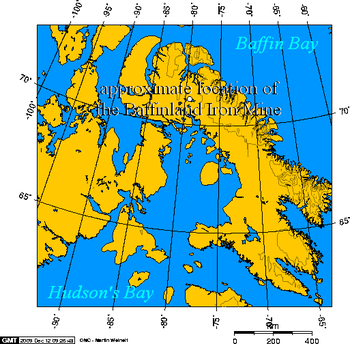 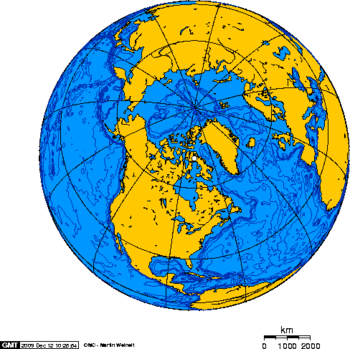 The Baffinland Iron Mines Corporation is working to develop a large open pit iron mine in the Mary River area of Baffin Island, Nunavut, Canada.[1][2][3][4][5][6][7]

Iron ore was first found in the Mary River area in 1962.[4] But exploitation of the ore body waited for an increase in the price of ore. According to the Railway Gazette the ore in this ore-body is sufficiently pure that it will not be necessary to conduct any processing before shipping it to market.

In 2008 a 150,000 tonne sample was shipped to Europe for testing.[8][9] The ore was transported to Milne Inlet, where it was carried by barges to a freighter waiting off-shore.

Business news agency Bloomberg reported that due to the financial crisis of 2007 Baffinland needed to secure an emergency loan of 43.8 million Canadian dollars, in order to ship enough supplies for the workers on site -- or they would not have been able to survive the winter.[10]

According to Bloomberg the emergency line of credit was necessary because the Baffinland management did not have the funds available to ship supplies to the 200 workers on site before shipping closed for the season, "after investing in commercial paper that borrowers couldn't repay." According to Bloomberg 95 percent of Baffinland's funds had been invested in short term debts investment vehicles, of 364 days or less.

Baffinland was the target of a hostile takeover in February 2011.[7] It is 70 percent owned by ArcelorMittal and 30 percent owned by Nunavut Iron Ore Consortium -- both privately held resource exploitation companies.

Construction of the railway, airfield, and other infrastructure is expected to cost $ 4 billion CAD, take four years, and employ thousands of construction workers.[7]

The mine is planned to commence operations in 2014, staffed by a crew of 500.[4] The sun sets on November 18th and does not rise again until January 23rd. But the Corporation is considering whether some portion of the sunless period will have sufficient hours of twilight to continue operations.

The Corporation plans to construct a railroad line to transport the ore to a port for transhipment.[4] Two routes were considered.[3] Initially a 100 kilometre route to Milne Inlet on Baffin Island's North Shore was preferred. However a 149 kilometre route to Steensby Inlet on the South Shore was chosen because it is ice-free for a longer portion of the year.

The route is projected to cost $1.9 billion CAD.[11] The Nunatsiaq News reported in April 2011 that

According to the Financial Post this will be the most northerly railroad in the world.[12]

The railway will undergo a separate environmental review before construction will be allowed.[11] Nunatsiaq News speculated in 2011 that construction might begin as early as 2012.

Construction of the rail line is planned to begin in 2010.[4] Because Baffin Island's soil is permafrost, the route was chosen so it lies on rock, gravel, or large-grained sand as much as possible. Fine-grained sand and clay soils pose more of a heaving problem when the surface layer annually thaws and freezes. The route will five multi-span bridges totalling 1400 metres in length. Two tunnels 800 meters and 250 meters will be required. The tunnels will have to be lined and insulated to make sure waste heat from the trains doesn't melt the permafrost surrounding the tunnel. The route detours around large areas of poorly drained glacial deposits and areas likely to contain deposits of fossil ice.

It is planned to use older carbon steel alloys for the rails, instead of more modern, higher performance alloys, because they can become brittle at very low temperatures.[4] The rails and bridges are designed for fifty years of active service.

The railbed's embankments will be up to four meters high.[11] Local wildlife will be provided with 300 culverts to allow them to cross under the railbed. In other areas graded snow-ramps will be maintained to allow wildlife to cross over the railbed.

The corporation initially planned to purchase three train sets, each containing 64 hopper cars, which will each make two round trips per day.[4] The Railway Gazette reported in July 2008 that EMD SD70 and GE Dash-9 were candidates for the lines' locomotives. Later plans relied on two train sets. In some versions of Baffinlands' plans a personnel train would run several times per week. In other versions all personnel would be flown to the mine-site.

Baffinland documents refer to both Milne Port and Steensby Port.

The first expeditions to the mine site, for samples. for assaying, landed at Milne Inlet, on Baffin Island's north coast. Milne Inlet is closer to the mine-site, but it was not seen as suitable port for the railway, as Steensby Inlet is free of ice for more of the year; Steensby Inlet can accommodate larger vessels; and the route to Steensby could be plotted that avoided more problematic areas of permafrost. As late as 2010 Baffinland was still considering shipping ore through port facilities in Milne Inlet. During the summer months 3 million tonnes of ore would be shipped to Milne Port by truck. The infrastructure for the truck route would cost $760 million CAD. The plan was abandoned.[13]

The railway terminus will be in Steensby Inlet, and will be called Steensby Port.[13]

Plans include the construction of an airfield -- one capable of handling executive jets -- near the mine-site.

Plans include the construction of a hydroelectic power plant at Separation Lake to provide electrical power for the project.[15]

The Canadian Broadcasting Corporation interviewed First Nations people from the region in April 2008, about their concerns with the plans.[16] Jaypetee Palluq, an Igloolik resident who had been asked to serve on a Baffinland advisory committee, was concerned that the mine's operation would interfere with the traditional hunts for sea mammals, like Walrus. He called on Baffinland to "find an alternate shipping route to the mine, regardless of the cost." Paul Quassa, Mayor of Igloolik, also expressed concern, over the effect of freighters on the ice used by the Walrus. He said the region was known for its highly prized aged, fermented walrus meat, a valuable export from the region.

In January 2011 Reuters reported that Baffinland had submitted an alternate transport plan for environmental assessment -- shipping by trucks.[17] The mine could operate 300 days a year using the rail-based option. The operation of trucks would be limited to the summer months, and would be able to carry only 3 million tonnes a year.

In August 2008 the CBC reported that Baffinland acknowledged three fuel spills.[18] Baffinland's vice-president of sustainable development, Derek Chubb, asserted that the three spills were contained within "secondary engineered containment facilities", and that there was no environmental damage. 5,000 litres of aviation fuel leaked from a fuel bladder at the mine's port facilities on Milne Inlet. The other two leaks of 200 litres, occurred near the mine site. Baffinland acknowledged that the leaks had been found months earlier, but had not been made public. Michael Nadler, the regional director general of the Department of Indian and Northern Affairs speculated that mine officials may not have felt an obligation to publicly report the leaks because they believed there had been no damage.

According to Reuters nearby similar deposits could double or triple the size of the exploitable ore.[17]