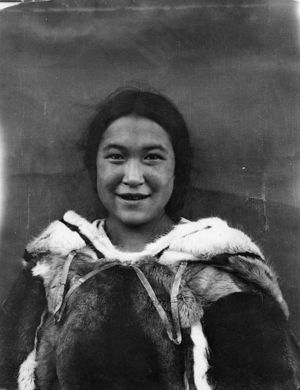 Inuit (Inuktitut syllabics, ᐃᓄᐃᑦ, singular Inuk / ᐃᓄᒃ[1]) or Eskimo (but see below) is a general term for a group of culturally similar indigenous peoples inhabiting the Arctic regions of Alaska, Greenland, the Canadian territories of Northwest Territories and Nunavut, the province of Quebec and the northern part of Labrador. Until fairly recent times, there has been a remarkable homogeneity in the culture throughout these areas, which have traditionally relied on fish, sea mammals, and land animals for food, heat, light, clothing, tools, and shelter. The Inuit language, Inuktitut, is grouped under Eskimo-Aleut languages, and is remarkable for being the only language of indigenous North American people with known linguistic relatives on another continent (Asia).

Canadian Inuit live primarily in the territory of Nunavut, the Nunavik region in the northern part of Quebec, and in the Nunatsiavut Inuit settlement region in Labrador. The Inuvialuit live primarily in the Mackenzie River delta, on Banks Island, and in parts of Victoria Island in the Northwest Territories. There have been Inuit settlements in Yukon, especially at Herschel Island, but there are none at present. Alaskan Inupiaq live on the North Slope of Alaska and the Seward Peninsula.

The English word Eskimo is of uncertain origin, but most likely originates from an Algonquian language. Many Inuit consider Eskimo to be pejorative because it originated with non-Inuit and has been widely believed to mean "eater of raw meat." However, many linguists now feel the term was actually derived from an Ojibwa word ashkime, meaning "to net snowshoes."[2]

The term Eskimo is still in common use in Alaska, where about half of the Eskimo population lives. It is now considered pejorative in Canada, where the preferred term is Inuit, which means "people" or "the people" in most Inuit languages. In the eastern Arctic of Canada, the language is called Inuktitut and in the "Western Arctic" it is called Inuvialuktun, though other local designations may be used for both. The Inuit of Greenland regard "Eskimo" as a more neutral term, but more commonly refer to themselves as Greenlanders or, in their own language, Kalaallit, and to their language as Greenlandic or Kalaallisut.