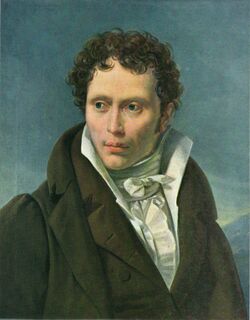 Arthur Schopenhauer (born in Danzig, February 22, 1788; died in Frankfurt am Main, September 1, 1860) was a German philosopher whose philosophy was influenced by Plato, Immanuel Kant and the teachings of the Upanishads. He had an outspoken pessimistic view of life, because life for him equalled willing and willing resulted in suffering. The main themes of his philosophical thought are present in his major work Die Welt als Wille und Vorstellung ('The World as Will and Representation', or 'The World as Will and Idea'), published in 1819.

In his childhood he travelled extensively and went to Germany, France and England. His mother was a novelist and through her Arthur became acquainted with Goethe, Schlegel and the Brothers Grimm. He briefly studied medicine at the University of Göttingen and went to Berlin to study philosophy. In 1813 he received a doctorate in Jena for his dissertation On the Fourfold Root of the Principle of Sufficient Reason, in which he laid the groundwork for his later philosophy.

The World as Will and Representation

The World as Will and Representation was originally published in 1819. It was revised and republished in 1844 and again 1859 just prior to Schopenhauer's death.

Schopenhauer observes in the preface that "the whole work is only the unfolding of a single thought."[1] So opens the first page of The World as Will and Representation. "The world is my representation," Schopenhauer writes.[2] It is a single thought but one whose clarification takes more than seven hundred pages to develop. While the work represents a serious engagement, particularly with Kant, Schopenhauer's philosophy engages with the thought of Plato, Leibniz, and others, and in varying degrees draws upon many moments from the history of philosophy. Schopenhauer endorses Kant's notion that the outer 'world,' the world outside of our representations, cannot be directly known, that is, he supports the notion that we are only ever able to cognize objects given in appearances. Schopenhauer's philosophy is greatly influenced by Plato. However, although Plato's Ideas play an important part in Schopenhauer's thinking, his version of the Ideas should not to be confused with those of Plato.[3] To understand the ways in which Schopenhauer is Platonic and the ways he is not Platonic requires a background of Schopenhauer's more thoroughgoing engagement with Kant, particularly, Schopenhauer's view of Kant's 'thing-in-itself,' a view that informs and directs the place Schopenhauer accords to Plato's Forms as well the ontological structure that Schopenhauer assigns to 'world.'

Kant is a dualist insofar as he separates the world of the senses, and the world of things-in-themselves. For Kant, things-in-themselves must remain unknown to us because of the restriction of our cognition. In a sense, the strict separation of noumenal and phenomenal objects makes for the very restriction. For Kant, noumena include the soul, God, and other 'things-in-themselves' intuited by the intellect alone but these 'things' are beyond experience and to be opposed to phenomenonal representations, that is, objects of cognition capable of being perceived by the senses. Because we are only ever able to 'experience' phenomena, the noumenal world represents a world of 'things' beyond experience and, therefore, beyond the practical limits of our reason. It is in 'determinate' experience that we are able to judge and categorize the world of phenomena. It is in experience that we can see, following a scientific model of causality, that events in the physical world submit to rules of causality. However, the noumenal world is not determinable in the same way.

Now a further and necessary distinction can be made if it was not clear already from the previous suggestion, that is, that while Kant allows for a plurality of things-in-themselves Schopenhauer does not. For Schopenhauer, the world of experience is - in a drastic way given the absence of any causality whatsoever on the side of the thing-in-itself - a phenomenon of an undivided thing-in-itself (the Will).

As made plain by Schopenhauer in his dissertation, The Fourfold Root of the Principle of Sufficient Reason, the two-world model of reality of Plato, Leibniz, and, to a lesser degree, Kant, misunderstands the function of causality when it admits to supersensible forms of causation.[4] For Schopenhauer, causality, as the form of time, is an a priori principle that governs the world of phenomenon.[5] However, it is a principle that does not apply to the thing-in-itself which, in Kant's philosophy, is a noumenal object not subject to spatiotemporal rules. In upholding the power of the subject to supervene upon appearances, in his treatment of the antinomies in the Critique of Pure Reason (CPR),[6] Kant is well aware of the problem of freedom that ensues in the phenomenal model, that is, the determinism that results when all things are subjected to a thoroughgoing causality. In a way that Schopenhauer does not, Kant leaves open a gap, a possibility of supersensible causes beyond the phenomenal sphere and, therefore, a space for the subject in its freedom. For Schopenhauer, however, havoc would ensue if a transcendental causality supervenes on the phenomenal world. While Schopenhauer's philosophy admits a thing-in-itself, it is not Kant's 'things-in-themselves.' There is only one noumenal thing-in-itself and its relationship to phenomenal objects one in which either side the supports the other, a connection that remains obscure and of which Schopenhauer is not entirely clear.

Schopenhauer's 'I', then, is an empirical 'I' and has no transcendental or noumenal counterpart as is the case in Kant. The rejection of a transcendental 'I' with causative power to supervene on phenomena puts in question the possibility of moral imperatives and of a subject of freedom although for Schopenhauer the experience of art and of music leaves open a window through which freedom might be possible. (For this and other reasons he is often referred to as a pessimistic philosopher.) A consequence of Schopenhauer's view of causality is that the "incursion [by the thing-in-itself] into the phenomenal world must be uncaused,"[7]; further, the counterpart phenomena, the principium individuationis, is limited to time and space and has no noumenal attributes. Phenomena can no more belong to the thing-in-itself than the thing-in-itself be affected by phenomena, which do "not belong to the thing-in-itself but are only the forms of our knowing."[8] Further, it is unclear how, or in what way, an empirical 'I' in the world of representation can be said to be causative in any Kantian sense insofar as cognition is placed on the side of determinate experience. Causality, then, is limited to experience, the world of time and space; causality, in a real sense, is the form of time. It is a thesis continued from The Fourfold Root which, while Schopenhauer seems to thinks otherwise there, goes go beyond Kant's more modest view of causality as a regulative principle (Cf. the B edition of the CPR).[9] Unlike Schopenhauer's limitation of the I to a psychological, empirical I, Kant's Critique of Pure Reason allows for a noumenal although unexplained aspect of the 'I' that exists outside of the rules of causality.

Following from the previous explanation, it is possible to show why what Schopenhauer calls 'the world as representation' must be the exact opposite of Plato's immaterial world of Ideas as developed in the theory of forms: the species of 'causes' that Schopenhauer rejects are the only types Plato admits. To be certain, Schopenhauer's world as idea is the world as we experience it at its most ethereal point, e.g., in the experience of art or the sublime. However, the idea remains tethered to the immanent world of phenomenon even when it appears to hover at its very edge, at a point where it might touch the thing-in-itself. The ideas, for Schopenhauer, are not the immutable Forms beyond the reach of causality of Plato's Philosophy, that is, what Plato conceives of as the reality in which the sensible world 'participates.' The Schopenhauerian 'ideas' are objectifications of the Will in phenomenon, that is, 'copies' of the Will,[10] an ironic point given Schopenhauer's privileging of perception over concepts.[11]

The World as Will and Representation consists of four parts: