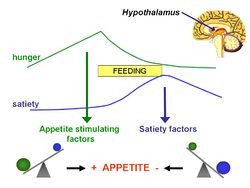 In 1956, Mellinkoff proposed the aminostatic hypothesis, stimulated by the observation that when normal individuals ingest protein, appetite diminishes as the serum amino acid concentration rises and vice versa.[1] He believed this was due to a satiety centre in the brain, sensitive to serum amino acids levels, that caused a suppression of hunger once the serum levels reached a certain point.

In 1956, Mellinkoff first observed the relationship between protein intake and hunger levels in human subjects.[2] He conducted four sets of experiments, each investigating the effect of ingested or infused protein (i.e. increased serum amino acid concentrations) on appetite. In experiments 1 and 2, protein was ingested (exp. 1) or infused in 45 minutes (exp. 2) together with glucose. For experiments 3 and 4 protein alone, in the form of casein, was ingested (exp. 3) or infused in 45 minutes (exp. 4). Serum amino acid concentrations were measured for 4 hours at regular intervals and subjects were asked to determine their level of hunger using a scale from -1 (nauseated) to +4 (ravenous) for all four experiments.

Since Melinkoff’s experiments, research has aimed to clarify and validate the idea that appetite diminishes as serum amino acid concentrations increase. To investigate the effects of protein diets on satiety, several preloads with differing protein/nutrient concentrations are given to subjects, then subjects rate their satiety according to a set scale after determined time points.[3] Poppitt et al.[4] found that subject were significantly less hungry after a high protein preload than preloads containing high levels of carbohydrates or fats. Similarly Westerterp-Plantenga [5]found a significant increase in 24-hour satiety in subjects consuming a high-protein diet compared to a high-fat diet. Several other studies have also concluded that high-protein diets result in a higher levels of satiety, supporting the aminostatic hypothesis. [3]

The ingestion of high protein diets have been suggested to increase thermogenesis, i.e. increase energy expenditure above baseline levels after consumption. [6] Johnston [7] found that diets with higher levels of protein have a greater effect on energy expenditure than diets with lower protein levels. A diet consisting of 15% protein had less thermic effect (-34kj/hour) than a diet with 30% protein. High protein diets have also been found to increase thermogenesis to a greater extent than high carbohydrate diets [8].

Science behind the theory 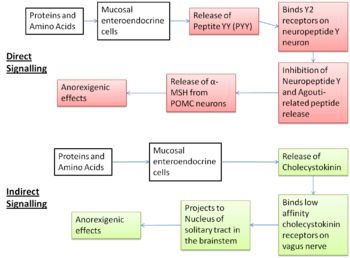 Experimental evidence supports the aminostatic hypothesis, but the complex homeostatic mechanisms between the peripheral organs and the central nervous system which cause this effect are not yet fully understood. Several different peptides released in response to dietary amino acids cause a decrease in orexigenic signalling and an increase in anorexigenic signalling by acting on one of two brain areas; the nucleus of the solitary tract (NTS) and the hypothalamic arcuate nucleus.[9] The involvement of these brain areas has been confirmed through studies which have found increased activation of neurons in the NTS and increase activation of the melanocortin pathway in the acruate nucleus after ingestion of a high protein meal. [10]
The post-prandial signals act on specific brain areas through two different methods:
1) Indirectly though vagus-mediated pathways
2) Directly after their release into the peripheral blood [9]

The indirect pathway
In the indirect pathway, dietary protein and amino acids present in the small intestine act on chemoreceptors on the mucosal enteroendocrine cells causing the release of cholecystokinin (CCK). The CCK-releasing cells are very close to the vagal afferent fibres which express CCK type 1 receptors. Activation of the afferent vagus nerve by CCK is relayed to the nucleus of solitary tract, which mediates anorexigenic effects. [9] The anoretic effects have been confirmed by experiments involving the administration of a CCK antagonist which caused an increase in energy intake. [11] This CCK-induced anorexia is thought to be a main mediator of satiety.

The direct pathway
The direct pathway involves peptide YY (PPY) which is secreted by L cells in the GI tract in response to dietary amino acids.[11] PPY acts on the Y2 receptors of the neuropeptide Y neurons in the arcuate nucleus. This inhibits the secretion of neuropeptide Y and agouti-related protein, potent orexigenic peptides, releasing the block on POMC neurons which allows them to release alpha-MSH to act on the MC4R receptors to cause anoretic effects.[11] There is some controversy about the action of PPY, because in studies in rodents, primates and humans where it was administered peripherally it caused a decrease in food intake and a reduction in weight gain as expected but when it was given centrally it had the opposite effect and stimulated appetite. [11]

Other factors thought to be involved
Other factors thought to be involved in satiety and reduced food intake due to a high protein diet are AMP-activated protein kinase (AMPK) and mammalian target of rapamycin (mTOR). [12] Studies found that a high protein diet caused suppression of AMPK phosphorylation and an activation of mTOR in the hypothalamus. It is thought that this is due to the actions of leucine which is the most abundant amino acid in most dietary proteins. It has been found to stimulate mTOR and cause the block in AMPK signalling in vivo, however the mechanisms behind this are unknown [12] High protein diets enhanced with extra leucine were found to cause a lower food intake and an increased weight loss compared to diets with lower leucine content. [12] The involvement of mTOR in satiating pathways was confirmed by experiments which found that blocking mTOR reversed the anoretic effects of a high protein diet. [12] The activation of AMPK has been found to cause an increase in food intake and weigh gain. [12]The neurons which express AMPK and mTOR are found in the arcuate nucleus and it is suggested they are involved in PPY signalling.[9]

The idea that glucagon-like peptide 1 (GLP-1) inhibits food intake through taste aversion was considered as it is released in response to amino acids in the gut and acts through the vagus afferent fibres. This theory was disproved after it was found that neurons expressing GLP-1 in the NTS were not activated during the satiety response.[9] Therefore the reduction in food intake after a high protein meal is not due to taste aversion.

Use as a method of weight loss

Over the past few years, obesity has become a global epidemic. One third of American adults and approximately 17% of American children are obese. [13] In the UK, the statistics are not looking much brighter with 25% of adults and 10% of children showing signs of obesity. It has been proposed in the UK that 60% of men, 50% of women and 25% of children will become obese by 2050 if no preventative measures are taken.[14]

Many hypotheses regarding various weight loss diets have been proposed, but what about the aminostatic hypothesis which suggests high protein intake? The science behind the theory certainly looks promising. It demonstrates induced levels of thermogenesis and increased satiety, both of which could contribute to weight loss. High-protein diets are becoming increasingly popular all over the world, but are these diets just a fad? Protein intake normally consists of 10-15% from daily calorie allowance. However, a high protein diets consists of obtaining 30-40% of daily calories from protein alone. So, what does a high protein diet consist of and what are the benefits and limitations? Is there any evidence proving the success of this diet?

The Dukan diet is most popular in France, where it was founded by Pierre Dukan. It is based on an allowance of one hundred allowed high protein foods controlled by four phases named attack, cruise, consolidation and stabilisation. This involves a strict regime of initially only eating 72 ‘allowed’ high protein foods (attack phase) for seven days which include beef, chicken and eggs. The next two stages slowly introduce vegetables (cruise phase) and other pleasurable foods (consolidation phase). Finally, other food groups are introduced in the stabilisation phase. [15]

The Atkins diet is most popular in America but is slowly gaining recognition in other parts of the world, including the UK. Like the Dukan diet, it follows a strict regime of ‘allowed’ high protein foods. However, the Atkins diet is strictly no refined carbs. Dr Atkins believes many refined carbohydrate foods, such as pasta, also have high sugar levels. Limiting the amount of carbohydrates a person eats would force the body to burn off fat instead of carbs.[16] Restricting refined carbohydrates, and therefore restricting refined sugars, would also diminish the ‘sugar rollercoaster’ that many people experience throughout the day. Thus, the individual would not crave sugary foods and would feel satisfied for longer.

Many clinical trials have been carried out to assess the effects of high-protein diets. A meta-analysis of five random clinical trials (N=447) showed that dieters on high-protein diets lost more weight, after 6 months, than dieters on the common low fat diets. The mean difference was -3.3kg. [17] However, the same studies showed no difference in weight loss after 12 months of dieting. This suggests that high protein diets are only successful for short term weight loss. However, another study compared four different diets consisting of varied quantities of carbohydrate and protein in pre-menopausal obese women (N=311). After 12 months of dieting, women who followed the high protein diet showed greater weight loss (mean = -4.7kg) compared to women subjected to the other diets named Zone (mean= -1.6kg), LEARN (mean=-2.6kg) and Ornish (mean=-2.2kg), respectively [18]. Moreover, a study by Westerterp-Plantenga et al. (2006) [19] concluded that high protein diets are more successful when intake is ad libitum. This supports the evidence that protein has a satiating effect which makes it less likely for impulsive, random eating.

However, there are some safety concerns with many diets. With high-protein diets, there is major concern over renal failure and bone loss. Although evidence is ambiguous regarding high protein diets damaging the kidneys, high-protein diets are best avoided in patients with underlying kidney problems. High-protein diets also propose a concern over bone health. For example, when meat is eaten, calcium is excreted from the bones to fulfil metabolic requirements. Reduced calcium levels in bones could potentially lead to osteoporosis.

Most studies have concluded that high protein diets do help to lose weight in the short term. However, high protein foods need to be eaten with limiting carbohydrates and fats to gain the maximum benefits. Although this sounds promising, potential detrimental long-term effects such as renal failure and bone loss still need to be addressed.

Since Mellinkoff's experiment in 1956 much progress has been made into understanding the complex mechanisms that give rise to the aminostatic hypothesis but there are still details that are not yet fully understood. There is evidence that increased serum amino acid concentration and high protein diets promote satiety and increase thermogenesis. The effectiveness of protein diets on inducing satiety are very much determined by the amount of protein present in the diet, as high-protein diets have been shown to be more effective at reducing appetite than diets with medium levels of protein. If high- protein diets are to be used in the future, as a method of weight loss, more research into potential long term effects need to be addressed.