Amanita phalloides (also known as 'Death cap') is a poisonous mushroom, commonly found in woods of hilly to middle mountain regions of all continents except Antarctica. It is renowned as one of the most toxic of all fungi, having been responsible for the majority of deaths from eating poisonous mushrooms[1]. Its dangerousness is heightened by its similarity to some widely eaten species, for instance the straw mushroom. A. Phalloides produces the most poisonous mushroom toxins.Most of mushroom poisonings are caused by A. Phalloides. This mushroom affects both humans and animals, and just half a cap can actually kill a human (thought to be involved in over 40% of human deaths that result from eating poisonous mushrooms! It's extremely poisonous and is a white fungus with a prominent cup-shaped base; differs from edible Agaricus only in its white gills. In addition, it is a poisonous basidiomycete fungus, one of many in the genus Amanita. ...

Amanita Phalloides has a large and distinctive fungal fruiting body composed of a stalk with a ring and volva and a cap with gills. The cap is usually from 5 to 15 centimeters across (usually rounded but flattening with age). The color of the cap is usually pale and yellowish, greenish or brown. After rains and towards the margins it is paler. The crowded white gills are free, white and dense.

The cap surface is sticky when wet and can easily be peeled which resembles an edible mushroom and evidently a dangerous feature. The stipe is white with a scattering of grayish-olive scales and is 8 to 15 cm long and 1 to 2 cm thick. The smell at first is faint and honey-sweet but eventually becomes very strong, sickly-sweet and intolerable.

In Europe, A. phalloides is often mistaken with Macrolepiota procera (the 'Parasol mushroom') or other edible species of the same genus. All species of the genus Macrolepiota, however, do not have volva, have a mobile ring, are generally bigger, and have evident scales on a cap that never show the typical green tinge of A. phalloides. Confusion sometimes arisen with mushrooms of the Agaricus campestris group (the 'champignons'). All Agaricus can be distinguished from A. phalloides because of the pink or brown gills, the brown, purple or black spore print and the absence of the volva. Asian immigrants in North America, Europe and Australia have often mistaken A. phalloides for Volvariella volvacea ('paddy straw mushroom'), edible, due to their similarity in appearance[4]. This is a leading cause of mushroom poisoning in the United States. All Volvariella have pink spore print and never bring a ring.

Other similar species are A. subjunquillea in eastern Asia and A. arocheae with a range extending from Andean Colombia to central Mexico (at least). White forms are very similar to Amanita verna. The cap of Tricholoma sejectum has a color identical to typical A. phalloides, but lacks ring and volva. Some edible mushrooms of the genus Russula (e.g., Russula virescens) also have a similar color, but lack ring and volva and have an overall different (more robust) bringing.

In addition to all these similar species, A. Phalloides is also commonly confused and mistaken for Amanita Caesarea as you can see in the photo on the upper right side. While A. Phalloides is a dangerous and toxic mushroom, A. Caesarea is not! Amanita Caesarea is actually a delicacy in Italy. Although this is a major difference between the two fungi, the biggest issue is that they resemble greatly in appearance and unfortunately people do confuse between the two, even professional mushroom pickers! 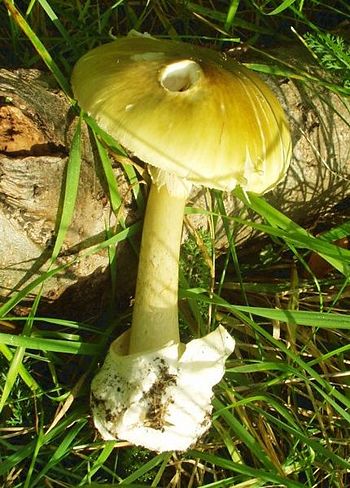 It is found primarily and originally in Europe but now is also in North America, southeastern Australia, South America, Asia, and Africa. A. phalloides is easily exported with conifers and hardwoods.

A. phalloides is mycorrhizal. It grows typically in low-middle altitude woods under oaks, beeches, nut trees, chestnut trees, other hardwoods and some conifers (for example, pines), usually from summer to early winter depending on the location.

Since A. phalloides is responsible of several deadly poisonings, its toxicity has been studied deeply. The most poisonous mushroom toxins are actually produced by Amanita phalloides. The toxin's of this mushroom are phallotoxins (phalloidin, phalloin, phallisin, phallicidin) and amatoxins (amanitin, amanin, amanullin). Regarding phallotoxins, the volva is the most poisonous. The toxin most responsible for the deadly effects of A. phalloides is alpha-amanitin. A mid-sized mushroom is enough to kill a healthy adult. Amanita Phalloidesis a highly toxic fungus and it’s responsible for most fatal mushroom poisonings worldwide! The toxicity is NOT diminished by cooking it, freezing it, drying it or salting it. In 2006, a Polish family was poisoned. There was one death and the other two family members needed liver transplants. 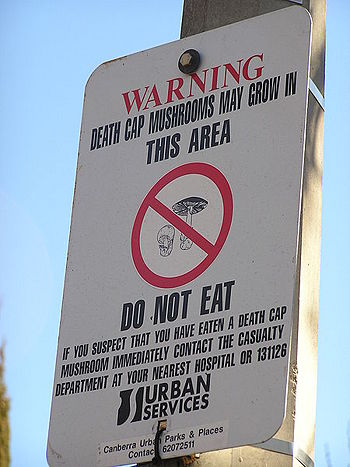 A. Phalloides’ toxic agents are cyclopeptides, which has two different groups of toxins: the amatoxins and the phallotoxins.

Amatoxins- α-amanitin and β-amanitin are the reason and are what cause the toxic effects. The manner in which these toxins work, prevents RNA polymerase II. The RNA polymerase of A. Phalloides has no effect whatsoever of the amatoxins, meaning A. Phalloides does not poison itself. The amatoxins inhibit transcription by interacting with the enzyme.

Phallotoxins- Since 1938, the toxicity of phalloidin has been thoroughly researched. It has been proven that phallotoxins are very toxic to liver cells yet they are not soaked up in gut so it is understood that they have very little to do with the toxicity of the mushroom.

Poisoning by A. phalloides has only long term symptoms, the toxins particularly affect the liver and kidneys. After 6-12 hours from the assumption of the mushroom, the patient is subject to stomach ache, diarrhea, vomiting. These symptoms may ease after 24 hours, but then diarrhea and vomiting returns. If untreated, the patient goes into coma and dies of liver failure.

Consumption of the death cap is a medical emergency which require urgent hospitalization. There are four main categories of therapy for poisoning:

1-PRELIMINARY CARE: it consists of gastric decontamination with activated carbon or gastric lavage. However, it’s common for patients to get the treatment only after many hours of ingestion so these methods may not work by then.

2-SUPPORTIVE MEASURES: used to treat the dehydration which may result from fluid loss during the gastrointestinal phase of intoxication.

3-SPECIFIC TREATMENTS: there isn't a specific medication available but some medication may improve survivability such as:

4-LIVER TRANSPLANTATION: for some people, they begin to develop liver failure so their only option to prevent death is liver transplant. The only problem is that some patients who recover suffer from permanent liver damage. Recent studies have shown that if the patient is treated within 36 hours of the mushroom ingestion, there shouldn’t be any problems.