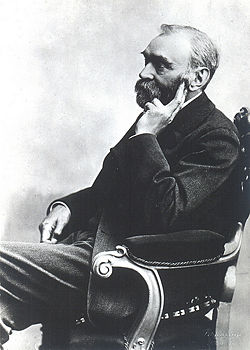 Alfred Bernhard Nobel (October 21, 1833, Stockholm, Sweden – December 10, 1896, Sanremo, Italy) was a Swedish chemist, engineer, innovator, armaments manufacturer and the inventor of dynamite. He owned Bofors, a major armaments manufacturer, which he had redirected from its previous role as an iron and steel mill. In his will, he used his enormous fortune to institute the Nobel Prizes. [1][2]The element Nobelium was named after him.

Alfred Nobel, a descendant of the 17th century scientist, Olaus Rudbeck (1630-1702), was the third son of Immanuel Nobel (1801-1872). Born in Stockholm, he went with his family in 1842 to St. Petersburg, where his father (who had invented modern plywood) started a torpedo works. In 1859 this was left to the care of the second son, Ludvig Nobel (1831-1888), by whom it was greatly enlarged, and Alfred, returning to Sweden with his father after the bankruptcy of their family business, devoted himself to the study of explosives, and especially to the safe manufacture and use of nitroglycerin (discovered in 1847 by Ascanio Sobrero, one of his fellow-students under Théophile-Jules Pelouze at the University of Torino). Several explosions were reported at their family-owned factory in Heleneborg, and a disastrous one in 1864 killed Alfred's younger brother Emil and several other workers.

Less well known is that Alfred Nobel was also a playwright. His only play, Nemesis, a prose tragedy in four acts about Beatrice Cenci, partly inspired by Percy Bysshe Shelley's blank verse tragedy in five acts, The Cenci, was printed when he was dying, and the whole stock except for three copies was destroyed immediately after his death, being regarded as scandalous and blasphemous. The first surviving edition (bilingual Swedish-Esperanto) was published in Sweden in 2003. As of May 2003, the play had not yet been translated into any language other than Esperanto.

Alfred Nobel is buried in Norra begravningsplatsen in Stockholm.

Nobel found that when nitroglycerin was incorporated in an absorbent inert substance like kieselguhr (diatomaceous earth) it was safer to manipulate, and in 1867 he patented this mixture as dynamite. He demonstrated his explosive for the first time that year, at a quarry in Redhill, Surrey, England.

He next combined nitroglycerin with another high explosive, gun-cotton, and obtained a transparent, jelly-like substance, which was a still more powerful explosive than dynamite. Gelignite, or Blasting gelatin as it was called, was patented in 1876, and was followed by a host of similar combinations, modified by the addition of potassium nitrate, wood-pulp and various other substances.

Some years later Nobel produced ballistite, one of the earliest of the nitroglycerin smokeless gunpowders, containing in its latest forms about equal parts of gun-cotton and nitroglycerin. This powder was a precursor of cordite, and Nobel's claim that his patent covered the latter triggered a vigorously contested law-suits between him and the United Kingdom. From the manufacture of dynamite and other explosives, and from the exploitation of the Baku oil-fields, in the development of which he and his brothers, Ludvig and Robert Hjalmar (1829-1896), took a leading part, he amassed an immense fortune.

The erroneous publication in 1888 of a premature obituary of Nobel by a French newspaper, condemning his invention of dynamite, is said to have made him decide to leave a better legacy to the world after his death. The obituary stated Le marchand de la mort est mort ("The merchant of death is dead") and went on, "Dr. Alfred Nobel, who became rich by finding ways to kill more people faster than ever before, died yesterday."

On November 27, 1895, at the Swedish-Norwegian Club in Paris, Nobel signed his last will and testament and set aside most of his estate to establish the Nobel Prizes, to be awarded annually without distinction of nationality. He died of a stroke on December 10, 1896, at Sanremo, Italy. The amount set aside for the Nobel Prize foundation was 31 million kronor (4,223,500 USD).

The first three of these prizes are for eminence in physical science, in chemistry and in medical science or physiology; the fourth is for the most remarkable literary work "in an ideal direction", and the fifth is to be given to the person or society that renders the greatest service to the cause of international brother/sisterhood, in the suppression or reduction of standing armies, or in the establishment or furtherance of peace congresses.

The formulation about the literary prize, "in an ideal direction" (Swedish i idealisk riktning), is cryptic and has caused much consternation. For many years, the Swedish Academy interpreted "ideal" as "idealistic" (in Swedish idealistisk), and used it as a pretext to not give the prize to important but less romantic authors, such as Henrik Ibsen, August Strindberg and Leo Tolstoy. This interpretation has been revised, and the prize given to, for example, Dario Fo and José Saramago, who definitely do not belong to the camp of literary idealism.

When reading Nemesis in its original Swedish and looking at his own philosophical and literary standpoint, it seems possible that his intention might have been rather the opposite of that first believed - that the prize should be given to authors who fight for their ideals against such authorities as God, church and state.

There was also room for interpretation by the bodies he had named for deciding on the physical sciences and chemistry prizes, given that he had not consulted them before making the will. In his testament, he stipulated that the money should go to discoveries or inventions in the physical sciences and to discoveries or improvements in chemistry. He had opened the door to technological awards, but had not left instructions on how to do the split between science and technology. As the deciding bodies he had chosen were more concerned with science than technology, it is not surprising that the prizes went to scientists and not to engineers, technicians or other inventors. In a sense, the technological prizes announced recently by the World Technology Network are an indirect (and thus not funded by the Nobel foundation) continuation of the wishes of Nobel.

In 2001, his great-grandnephew Peter asked the Bank of Sweden to differentiate its award to economists given "in Alfred Nobel's memory" from the five other awards. This has caused much controversy whether the prize for economics is actually a "Nobel Prize" (see Bank of Sweden Prize in Economic Sciences in Memory of Alfred Nobel).