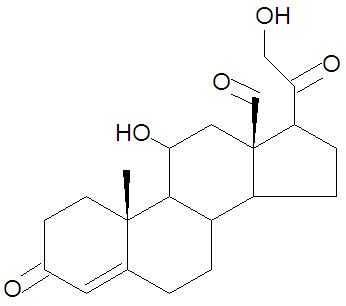 Aldosterone, also called (11ß)-11,21-Dihydroxy-3,20-dioxo-pregn-4-en-18-al, is a steroid hormone. It is the major mineralcorticoid hormone and has a critical role in regulating the concentrations of sodium and potassium - in extracellular fluids, thereby influencing blood pressure and hydration. A deficiency in mineralocorticoids can lead to life-threatening abnormalities of electrolyte and fluid balance.

Aldosterone acts mainly at the distal tubule of the kidney. There, it promotes the resorption of sodium, meaning that less sodium is lost from the body in urine. It also increases resorption of water, producing an expansion in the volume of the extracellular fluid; this is an osmotic effect that is directly related to the increased resorption of sodium. Finally, it increases the rate at which potassium is excreted.

Aldosterone acts via mineralocorticoid receptors to stimulates transcription of the gene encoding the sodium-potassium ATPase. This leads to an increase in the number of "sodium pumps" in the basolateral membranes of tubular epithelial cells. Aldosterone also increases the expression of a sodium channel which facilitates uptake of sodium from the tubular lumen. Aldosterone also has similar effects on sweat glands, salivary glands and the colon. Together, the result is that aldosterone acts to conserve body sodium and water.

Aldosterone is synthesized from corticosterone by oxidation of the C-18 methyl group to form an aldehyde.

Primary aldosteronism underlies about 10% of cases of resistant hypertension.[1]