Steroids, or steroid hormones, are hormones with powerful effects, both beneficial and detrimental, when artificially supplemented into living systems. They are normally produced by three glands, the adrenal cortex, the testes, and the ovaries, but are also produced by the placenta during pregnancy, and some steroids ("neurosteroids") are produced within the brain. The five major classes of steroids are: progestagens, glucocorticoids, mineralcorticoids, androgens and estrogens. Steroids play an important role at all stages of life from the embryo until death. Corticosteroids, or synthetic mimics such as prednisone, are used to treat inflammation related illnesses like asthma or rheumatoid arthritis, but they can have severe side effects. Athletes have often taken anabolic steroids to improve muscle growth and athletic performance. Glucocorticoids play a role in metabolism and inflammation, and estrogens have been linked to cancer. Testosterone and estrogen influence sexual traits (maleness/femaleness). All steroid hormones are naturally synthesized from cholesterol (through pregnenolone) under the control of the anterior pituitary gland, which produces andrenocorticotropic hormone (ACTH, or corticotropin), a polypeptide that stimulates the conversion of cholesterol to pregnenolone. The steroid hormones activate gene expression by binding to enhancer proteins, called steroid receptors. They also act through mechanisms not involving gene expression.[1] Deficiency of the enzyme 21-hydroxylase is the most common steroid-related in-born metabolic disorder, but treatments are available for this condition, called congenital adrenal hyperplasia.[2]

Steroids can be classified into five major groups, based on their structures and functions: progestagens, glucocorticoids, mineralcorticoids, androgens and estrogens. The glucocorticoids and mineralcorticoids are referred to collectively as the 'corticosteroids', and the androgens and estrogens are referred to collectively as 'sex steroids' or 'gonadal steroids'. The progestagens are vital to the start of life, via pregnancy, while the glucocortioids and mineralocorticoids are vital to metabolism and electrolyte balance. The sex steroids provide the sexual dimorphism observed in many species. Because all steroids are derived from cholesterol, the numbering and nomenclature follow that of cholesterol. 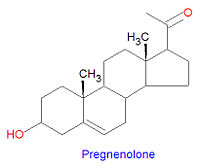 Pregnenolone is the first steroid derived from cholesterol. It is synthesized through an intermediate, 20

-dihydroxy-cholesterol, which is subsequently oxidized at C-20 to form a ketone with cleavage of carbons 22-27.

Progesterone, a progestagen which prepares the lining of the uterus for implantation of an ovum, is biosynthesized from prognenolone by oxidation of the 3-hydroxy group into a 3-keto group and by the isomerization of the

5 double bond into a

4 double bond. This hormone is also essential in mammals to maintain pregnancy. Progesterone is the precursor chemical in the biosynthesis of corticoids and androgens.

-oriented (points down) then rings A and B are fused in a trans conformation, but in the

orientation, the rings are fused in a cis conformation. All steroids with an H5 are in the 5

orientation, while bile salts derived from cholesterol have the opposite 5

Glucocorticoids and mineralocorticoids (or mineralcorticoids) are naturally synthesized by the enzymatic oxidation of progesterone. Cortisol, the major glucocorticoid, is produced when progesterone is hydroxylated at three positions, C-11, C-17 and C21. The oxidation of the C-17 carbon must occur before the hydroxylation at C-21 to synthesize cortisol, otherwise corticosterone is formed. Aldosterone, the major mineralcorticoid, is synthesized from corticosterone by oxidation of the C-18 methyl group to form an aldehyde.

Medical use of glucocorticoids

Although cortisone can be used to treat inflammation related diseases, like rheumatoid arthritis, it has severe side effects. The drug prednisone and other glucocorticoids have been developed as a cortisone mimic and its use leads to milder side effect problems in the patient population. The only difference between the two compounds is the presence of an double bond between the C1 and C2 carbons of prednisone (note arrows in figure). Cortisone has a single C-C bond in this location. 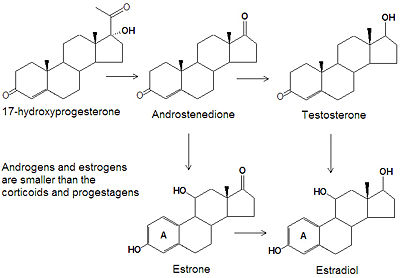 The term sex steroids refers collectively to the androgens and the estrogens, which both play a major role in defining sexual traits. Disorders affecting sex steroid levels can lead to the masculinization of women and the demasculinization (feminization) of men. In androgen insensitivity syndrome, a genetic mutation in the androgen receptor means that genetically male individuals (XY) do not respond normally to male hormones. In cases of complete insensitivity a genetic male will look like a female.

Androgens and estrogens have only nineteen or eighteen carbon atoms, respectively, compared to the larger progestagens, glucocorticoids and mineralcorticoids which all have twenty one carbon atoms. The biosynthesis of both classes of sex steroids starts with the hydroxylation of progesterone at C-17 to produce 17

The smallest class of steroids, the estrogens, are biosynthesized, by the enzyme aromatase, from the androgens by loss of the C-19

-methyl group, reduction of the C-3 ketone to a hydroxyl group, and the formation of an aromatic ring A. Estradiol is the major estrogen.

Medical use of androgens

In men, testosterone secretion declines with age, and this is associated with loss of muscle strength and sometimes loss of libido. Testosterone supplementation of elderly males with very low serum testosterone levels has mixed results.[3]

Medical use of estrogens

At menopause, circulating levels of estrogens decline markedly in women, and estrogen replacement therapy has been widely used to ameliorate the symptoms associated with the menopause.

Presently, the only hormonal medications used for birth control are steroids aimed at manipulating the female ovulatory cycle. Progestin prevents ovulation by suppressing the secretion of luteinizing hormone. Progestins also thicken cervical mucus, thereby retarding the passage of sperm, and they make the endometrium unfavorable to implantation. Estrogen on the other hand prevents ovulation by suppressing the secretion of follicle-stimulating hormone (FSH), which is necessary to begin the ovulatory cycle.

Anabolic steroids are steroids related to testosterone which encourage muscle development. They work by increasing the production of proteins and increase cell tissue, especially muscle mass. In addition, they decrease muscle catabolism by lowering the levels of cortisol, a stress hormone. Anabolic steroids have other effects, including virilization, resulting in larger clitoris in women and penis in men, hair growth, acne, elevated blood pressure, liver and heart damage, and increases in LDL cholesterol and lower HDL cholesterol levels. The use of anabolic steroids is banned in many sports and their use without valid prescriptions is illegal in many countries.

Classically, steroids exert their effects by "genomic" actions - by altering gene expression in their target cells. Because of this mode of action, steroid hormones take hours to have an effect because messenger RNA and then proteins must be synthesized; this is in contrast with other fast acting hormones, such as epinephrine, in which their target cells have an immediate response.

The genomic actions of steroids are mediated by specific receptors that are located in the cytosol of particular cells. Steroids enter cells freely since they are lipid soluble and so can pass through cell membranes. All steroid hormone receptors have a hormone-binding region that binds the steroid tightly, with dissociation constants in the nanomolar range. The similarities in this region of the receptors suggests that they all had a common ancestor. The steroid receptor proteins are generally specific for each steroid class, binding tightly only to the one steroid, but weak binding can occur with some other steroids.

In addition to these classic genomic actions, the steroids that give a more immediate response may have receptors on the cell membrane that initiate signal transduction. For example, in the brain, progesterone is metabolised into allopregnanolone which interacts with some classes of receptors for the inhibitory neurotransmitter GABA.

Congenital adrenal hyperplasia is a "group of inherited disorders of the adrenal glands, caused by enzyme defects in the synthesis of cortisol (hydrocortisone) and/or aldosterone leading to accumulation of precursors for androgens. Depending on the hormone imbalance, congenital adrenal hyperplasia can be classified as salt-wasting, hypertensive, virilizing, or feminizing. The most common defect is in steroid 21-hydroxylase. Other defects occur in steroid 11-beta-hydroxylase, steroid 17-alpha-hydroxylase, or 3-beta-hydroxysteroid dehydrogenase (3-hydroxysteroid dehydrogenases)".[4] [5][6]

Some people inherit defective forms of the enzyme 21-hydroxylase. Because 21-hydroxylase is a key enzyme in the production of the corticosteroids, defects in this enzyme lead to severe physiological effects. The enzyme is required for the production of cortisol, corticosterone, aldosterone and other steroids. Diminished levels of the glucocorticoids induces the anteterior pituitary gland to increase production of ACTH, which in turn increases the levels of progesterone and 17

hydroxy-progesterone. High levels of these two hormones increases the levels of androgens, which are derived from them. The pathogenesis can be stopped by the administration of glucocorticoids to complete the feed-back mechanism and halt overproduction of ACTH.

Aldosterone is the main mineralcorticoid and is produced in the adrenal glands. It plays a critical role in maintaining normal plasma concentrations of sodium; patients with 21-hydroxylase deficiency can suffer hypertension and dehydration, which can lead to shock or death. Increases in the levels of the androgens (testosterone, for example) resulting from the overproduction of progesterone and 17

-hydroxy-progesterone lead to the virilization ((masculinization) of those affected. In girls, masculinization of the external genitalia is usually evident at birth. Boys appear normal at birth but sexual precocity soon follows. Accelerated growth and early bone development leads to a shortened stature.

The Nobel Prize and Steroid Research

Many scientists have won the Nobel Prize for work on steroids.

In 1928, the prize went to Adolf Otto Reinhold Windaus (1876-1959) "for the services rendered through his research into the constitution of the sterols and their connection with the vitamins"[7]

In 1939, Adolf Butenandt (1903-1995) was awarded the The Nobel Prize in Chemistry in 1939 for his work on sex hormones, jointly with Leopold Ruzicka for his work on polymethylenes and higher terpenes In [8]. Butenandt isolated oestrone in pure, crystalline form in 1929 and androsterone in 1931. From androsterone he (as well as Ruzicka, independently of each other) obtained testosterone in 1939. He isolated progesterone from the corpus luteum in 1934.[9]

"Professor Edward Kendall. You and your collaborators have greatly contributed to the isolation and identification of the cortical hormones, and you have facilitated the artificial production of some of these substances. You have shown conclusively that their biological actions differ all according to their chemical structure.

"Professor Tadeus Reichstein. To you and your co-workers we owe the first isolation of four active hormones from the adrenal cortex, the first synthesis of one of them, the proof of the steroid nature of said hormones, and numerous details on the structure and properties of these important bodies. In this way the wearisome road to synthesis was smoothed, and new medicaments created.

"Doctor Philip Hench. Your brilliant investigations in respect of the beneficial effects of pregnancy and jaundice on rheumatoid arthritis have been the starting-point for the famous discovery during «the preceding year» that these diseases and some others are favourably influenced by hormones from the adrenal cortex."

In 1969, Derek Barton (1918-1998) was awarded the Nobel Prize in Chemistry fore "contributions to the development of the concept of conformation and its application in chemistry". In 1950, in a short paper in Experientia entitled "The Conformation of the Steroid Nucleus", he had shown that organic molecules in general (and steroid molecules in particular) could be assigned a preferred conformation based upon results accumulated by chemical physicists, in particular by Odd Hassel, with whom he shared the prize .[13]