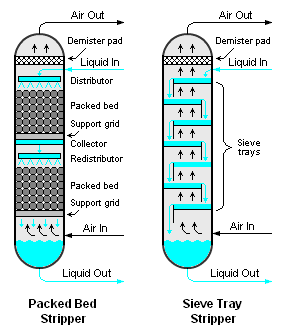 Air stripping is the transferring of volatile organic compounds (VOC) and/or other volatile components of a liquid into an air stream. It is a chemical engineering process used for the purification of groundwaters and wastewaters containing volatile compounds.[1][2]

Air stripping for the removal of contaminants from groundwaters and wastewaters is especially effective for contaminants that have a high vapor pressure and a low solubility in water.[1][2]

The compounds removed by air stripping include benzene, toluene, ethylbenzene, and xylene (BTEX) and various solvents (such as trichloroethylene and tetrachloroethylene) found in some wastewaters. Ammonia can also be stripped from wastewaters.

There are many methods for the air stripping of volatile components from liquids, but the most common methods are the use of either a packed or trayed vertical cylindrical vessel [3][4][5] as shown in Figure 1, and this article is devoted primarily to those two methods.

Either the packed or trayed air stripper involves the downward flow of a volatile-containing liquid (most often, water) and the upward flow of air. The liquid and air are intimately contacted by the packing or the trays in the stripper. The volatile components in the liquid are transferred into the air stream by the series of intimate contacts occurring at each tray as the air flows upward through the stripper.

A properly designed and operated air stripper can remove up to 99.9+ percent of volatile organic compounds (VOC) from groundwaters and wastewaters.

There are many different types of trays, including bubble-cap trays, valve trays and sieve trays.[6] Sieve trays are the most commonly used type in air strippers because they are very simple, less expensive than the other types and adequately efficient for use in air strippers. There are also many types of packing available for packed bed strippers, either randomly packed or structurally packed material as shown in the adjacent photographs.

The stripped liquid leaving the bottom of the stripper is essentially free of volatiles. The air stream leaving the top of the stripper contains the volatiles removed from the liquid and may require some type of emissions mitigation to comply with applicable environmental regulatory limits such as the National Emissions Standards for Hazardous Air Pollutants (HAP) as set by the U.S. Environmental Protection Agency.

When mitigation of the air pollutant emissions from an air stripper is required, there are three technologies available:

If utilized in a large complex such as a petroleum refinery or petrochemical plant, then the air emissions from a stripper may be used as combustion air in one of the many fired heaters (i.e., process furnaces) used in such complexes. In some such cases, the VOC combustion products would only be carbon dioxide and water.

The relative effectiveness of the above mitigation technologies depend to a great extent on the concentration level of the pollutants in the air stream from an air stripper. Very low pollutant concentrations mean that very large volumes of air must be handled in order to mitigate very small amounts of pollutants. GAC filtration is generally used most frequently because it has the ability to remove VOC cost-effectively from air stream containing less than 1% of VOC.

In some cases, air pollution dispersion modeling studies may be used to determine whether or not routing the air stream through a vent stack of a reasonable height would result in compliance with the applicable environmental regulations without requiring any mitigation of the air pollutant emissions from the air stripping system.

Figure 2 (below) is a simplified, schematic flow diagram of a complete air stripping system including optional provisions for heating the feed water: 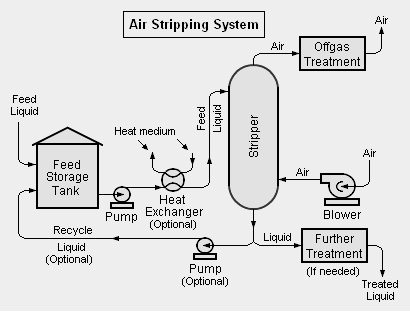 Selection of the air stripper type

The selection of whether to use a packed or trayed air stripper is primarily based on which is more cost effective for each specific application. However, in general:

The are many variables to be considered in the design of an air stripping system. Among them are:

VOC removal performance data collected from 46 operating air strippers in the United States are summarized in the table below:[7]

The sole focus of this article is to discuss the air stripping process. However, gases other than air can be used to strip volatile components from liquids. For example, steam and inert gases (such as nitrogen) have been and are being used for stripping liquids of undesirable, volatile components.

The well-known Selexol process uses a physical solvent (propylene glycol dimethyl ether) to absorb and remove acid gases such as hydrogen sulfide and/or carbon dioxide from gas streams. The solvent is then stripped of the acid gases by using either steam or air stripping and, in some cases, partially stripped by steam and partially stripped by air.[8] The process has been effectively used for carbon dioxide removal in a number of of ammonia synthesis production plants as well as in some natural gas processing plants.