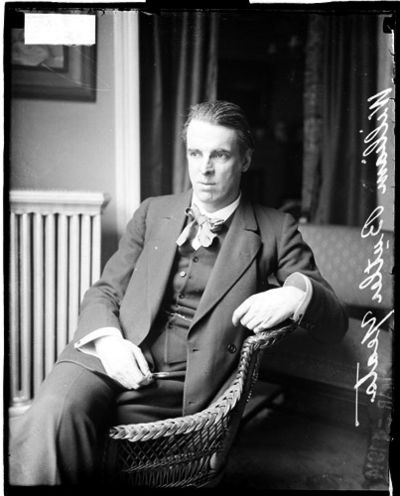 William Butler Yeats (June 13 1865 – January 28 1939), perhaps the greatest lyric poet in English in the late nineteenth and early twentieth centuries, remains a man of enormous contradictions. The nominal leader of the Irish literary renaissance, he spent most of his adult life based in London; a quiet, sensitive soul, he was a political firebrand who at times seemed to flirt with fascism; a sometime dabbler in the occult, he was nevertheless a clear-eyed rationalist when it came to literary matters. Poet, playwright, political activist, and banner-carrier for Irish writers generally, Yeats today is perhaps best remembered for his very late poetry, which was filled with richly humane meditations on human age and frailty.

Yeats was born in Dublin, the son of a successful portrait painter. He was educated at schools in London and Dublin and at the Dublin School of Art, but although his younger brother Jack became a well-known painter, his own decision to become a poet was supported by his father. He published successive volumes of verse and also editions of the poems of Blake and Spenser. Together with Lady Gregory and others, he was responsible for the creation of an Irish national theatre with Irish actors and plays, some of which he wrote himself. An active nationalist, his fading belief in the movement was renewed by the Easter Rising of 1916. He served as a senator of the Irish Free State from 1922 to 1928. In 1923, Yeats was awarded the Nobel Prize in Literature. He died in 1939 in the south of France, but after the second world war, his bones were supposedly[1] reinterred at Drumcliff in Sligo.

Under bare Ben Bulben's head
In Drumcliff churchyard Yeats is laid,
An ancestor was rector there
Long years ago; a church stands near,
By the road an ancient Cross.
No marble, no conventional phrase,
On limestone quarried near the spot
By his command these words are cut:

Cast a cold eye
On life, on death.
Horseman, pass by.