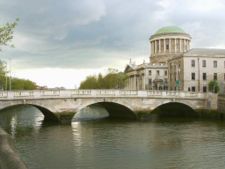 Dublin is the capital of Ireland, and its largest city. Its usual Irish name is Baile Átha Cliath (bˠalʲɛ a:ha klʲiəh), which translates as "the town of the hurdled ford." It is also sometimes named Dubh Linn in Irish, which translates as "black pool." The two Irish names are accounted for by the fact that there were originally two settlements in the vicinity, which eventually merged into one.[1]

Dublin is located on Ireland's east coast, at the mouth of the River Liffey, at coordinates 53.3 degrees north, 6.2 degrees west.

The modern city of Dublin is a significant European capital and is by far Ireland's most important city in terms of population, commerce, transport and government. The Greater Dublin area accounts for 48% of GDP in the country [2]. After recession in the 1980s, Dublin has benefited greatly from the boom in the Irish economy (known as the Celtic Tiger) that began in the 1990s. It has attracted major investment, and become the European and EMEA headquarters for many multinational companies, especially those in the pharmaceutical and information technology industries. In software, Microsoft, Google, Amazon and Paypal, among others, all run their European operations from the city. Dublin is the headquarters for most national and international Irish businesses, including Allied Irish Bank and the Bank of Ireland.

International finance services operations were attracted to the city with the development of the International Financial Services Centre (IFSC) and the application of generous tax breaks in the 1990s. The development, in Dublin's docklands, sees a turnover of over €1 trillion ($1.3 trillion) annually.

The government of Ireland has sat in Dublin, in Leinster House, since independence, and the President's residence, Áras an Uactaráin, is in Phoenix Park.

The city of Dublin is managed and governed by Dublin City Council, a unicameral body comprising 52 Councillors, elected to represent local wards. The Council is headed by a Lord Mayor - currently Labour Party member Cllr. Andrew Montague - who sits for a year-long term.[4] The Lord Mayor's official residence is the Mansion House. While the Lord Mayor chairs council meetings, the role is otherwise largely ceremonial, with no additional powers. The Green Party have proposed that the Lord Mayor should be directly elected by the people of Dublin (currently the office is filled by an election of Councillors) and should have executive powers. Due to the centralised nature of government in Ireland, the Council - as with all other local authorities in the state - actually has quite limited powers. What power it does have largely reside with the permanent staff, especially the City Manager, who is effectively the Chief Executive of the Council.

Since November 2007, Council meetings have been broadcast live over the Internet and are available for later playback.[5]

The Council's responsibilities cover a wide range of areas, including city planning and zoning; provision of public utilities such as water, street lights and sewage; provision of local authority housing; waste collection; traffic management; provision of leisure and educational facilities such as parks, swimming pools and libraries; operation of emergency services such as Dublin Fire Brigade, and so on.

Historically, and into the present, Dublin remains a low-rise city. Even in the city centre, most buildings are no higher than five or six stories. Currently the tallest building in Dublin is Liberty Hall (headquarters of the country's largest trade union, SIPTU), which stands at 16 storeys (60 metres). While the modern IFSC and new developments on the south quays approach Liberty Hall in height, there has been a marked resistance by city planners, with one or two exceptions, to allow high rise buildings within the confines of the city, especially near existing residential areas. One exception includes the planned Britain Quay Tower or U2 Tower, which will rise to 120 metres.[6]

The city saw the construction of many fine Georgian houses in the late 18th and early 19th centuries, as well as extensive redevelopment - mediaeval streets were in many cases demolished altogether and widened to create new streets. The city limits also expanded several times, coming to include former outlying villages such as Rathmines, Ranelagh and Raheny. This period also saw the erection of many fine examples of public buildings, including the Four Courts and Custom House.

Dublin city is split into a large number of suburbs all of which have been split up and have been given a postal code. For example D6W is for Terenure and Templeogue to name but a few. Those north of the Liffey have a odd number and those south of the river have an even number, the only exception to the rule is D8.

Dublin's history stretches back to the 9th century, when it was founded by Viking settlers.[7] For further information on the settlement's history see external article.[1]