This article is about the legendary wooden horse. For computer viruses, see malware. 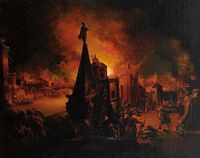 In Greek mythology, the Trojan Horse was a famous military deception in which the Trojans were persuaded to take a force of enemy warriors inside the walls of their city. It brought about the end of the Trojan War.

The stratagem was devised by Prylis the son of Hermes, or, in other accounts, by Odysseus. The Greek expeditionary force besieging Troy pretended to sail away, leaving behind the enormous horse, constructed by Epeius, in which Greek soldiers under the command of Odysseus had secreted themselves., The horse had an inscription invoking Athene's aid for a safe return to their homes.

The Trojans were further deceived by Sinon, a Greek left behind to signal to the fleet. Sinon was seized by Trojan warriors and brought before King Priam. He began by pleading for his life:

What land, what waters, can take me now? There is nothing, nothing left for me any more, no place with the Greeks, and here are the Trojans howling for my blood.[1]

He explained that it had been proposed to sacrifice him in order to change the winds that prevented the Greeks from returning home, that the horse was likewise to appease Athene, and that it was deliberately built so large that it couldn't enter the walls of Troy; but if it was damaged, harm would come to those who damaged it.

It was Calchas, again, who bade them build a mass so mighty it almost reached the stars, too big to enter through any gate, or be brought inside the walls. For if your hands should damage it, destruction, (May God avert it) would come upon the city, but if your hands helped bring it home, then Asia would be invading Greece, and doom await our children's children (ie the Greeks).[1]

The Trojan king Priam was warned by the priest Laocoön ("I fear the Greeks, even when bearing gifts") as well as his own daughter Cassandra. In order to reduce Laocoön's credibility, Apollo sent two serpents to kill him and his two sons, and the warnings were ignored. The horse was brought into the city, even though part of the wall had to be knocked down for the purpose

At night, with the people of Troy asleep, selected Greek fighters inside the hollowed-out belly of the horse slipped out and opened the city's gates, which allowed the returning Greek army to enter and sack the city.

The list of warriors inside the horse varies according to differing accounts, with numbers varying between 23 and 50.

Homer's Iliad does not describe the episode of the Trojan horse, although there are references thoughout indicating that the bard expected listeners to the tales to be thoroughly familiar with the basic events of the Trojan War.

Commentators both classical and modern have doubted the story, and there have been various explanations, such as the horse actually being a siege tower covered with horse hides, or that Greeks, after burning their camp, hid behind Mount Hippius ("of the horse")

The term Trojan horse became a common metaphor, and has passed into computer terminology to describe malware which tricks a user to let into one's computer by appearing innocent but which causes damage afterwards.